News
Business
Movies
Sports
Cricket
Get Ahead
Money Tips
Shopping
Sign in  |  Create a Rediffmail account
Rediff.com  » News » Rajnath: 'Will resolve Kashmir; if not through talks then...'

Rajnath: 'Will resolve Kashmir; if not through talks then...'

Defence Minister Rajnath Singh asserted on Saturday that the Kashmir issue will be resolved and no power on the earth can stop it. 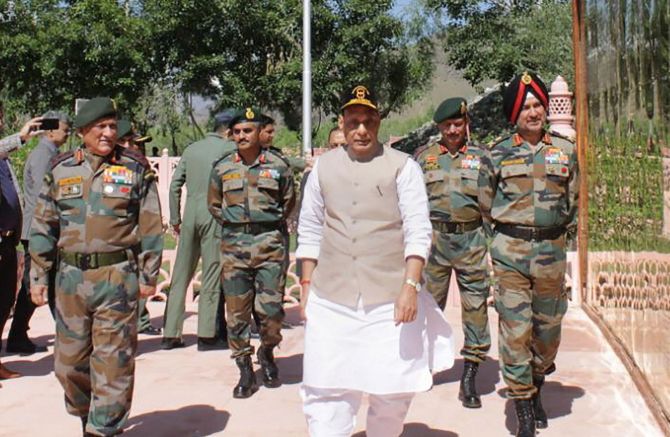 Singh said Kashmir is in his heart and the government wants it to become not only paradise of India but tourist paradise of the world.

The defence minister earlier paid tributes to the soldiers killed in the 1999 Kargil War at a memorial in Jammu and Kashmir's Dras sector as the nation commemorated the 20th anniversary of 'Operation Vijay'.

He also inaugurated two bridges built by the Border Roads Organisation at Ujh in Kathua and Basantar in Samba district.

The bridge over the Ujh river in Kathua was constructed at a cost of Rs 50 crore. It is the longest bridge constructed by BRO so far.

"If not through talks, then we know how," Singh said.

Singh maintained that he has made repeated appeals as a home minister asking 'so-called leaders' for talks to resolve the issue. 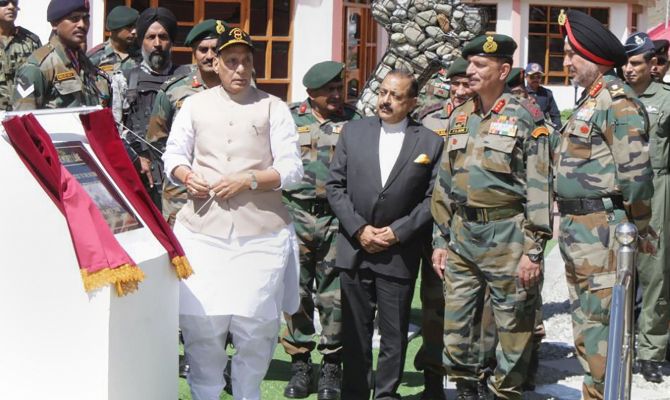 Singh was the Union Home Minister in the previous government.

"We want speedy development and prosperity of Jammu and Kashmir," he added.

Earlier, Singh paid tributes to soldiers killed in the Kargil War at a memorial in Dras sector.

The army's 'Operation Vijay' refers to the limited war against Pakistan's infiltration in 1999 and it was fought on the icy heights of Kargil, including super-high altitude locations such as Tololing and Tiger Hill.

"The defence minister started his visit by laying a wreath in memory of the gallant martyrs of 'Operation Vijay' at the iconic Kargil War Memorial, which was followed by observing of one minute silence as a mark of respect for the fallen heroes," Srinagar-based defence spokesman Colonel Rajesh Kalia said. 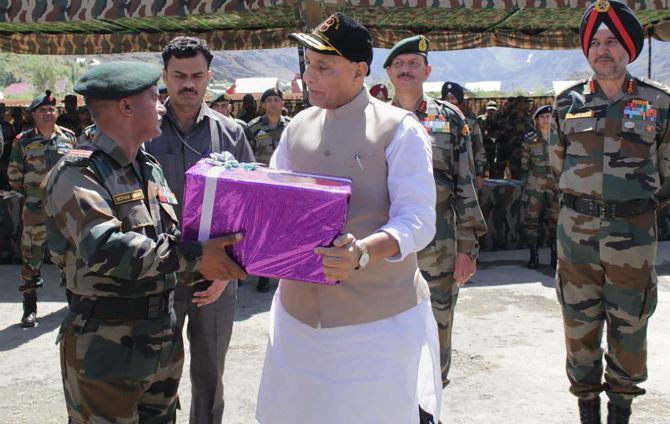 Singh later visited the 'Veer Bhoomi' and the 'Hut of Remembrance', which are located in the war memorial premises at Dras, he said.

The defence minister was briefed on 'Operation Vijay' and the heroic actions of the Indian troops to thwart the nefarious designs of the enemy in the Drass, Kargil and Batalik sectors, the spokesman said.

On the occasion, Rajnath Singh dedicated a 'Memory Lane' that displays information on a few important battles, he said.

"The defence minister also took the opportunity to share a cup of tea and interact with the soldiers presently deployed in the sector.

"He appreciated the dedication of the troops who are defending the borders, in these challenging conditions and conveyed the appreciation of the nation to the Indian Army, for always keeping 'Nation First'," the spokesman added.