The Congress on Sunday played down Defence Minister Rajnath Singh's announcement on the import embargo on defence equipment, saying it was only "high sounding jargon" and that 'atmanirbhar bharat' was merely a slogan. Congress spokesperson Abhishek Singhvi also criticised Singh for dubbing the import restrictions as a push to achieve a self-reliant India, saying there was a "big difference between claims and reality.

"The prime minister has given the slogan of 'Atmanirbhar Bharat', but has not said when, how and what will be the direction. Just a slogan has been given because this government and the prime minister are fond of slogans," Singhvi said at an online media briefing.

Senior Congress leader P Chidambaram said the defence minister promised a "bang" on a Sunday morning but ended with a "whimper".

"The only importer of defence equipment is the defence ministry. Any import embargo is really an embargo on oneself," the former home minister said.

What the defence minister said in his "historic Sunday announcement" deserved only an office order from the minister to his secretaries, Chidambaram said in a series of tweets.

"Import embargo is high sounding jargon. What it means is we will try to make the same equipment (that we import today) in 2 to 4 years and stop imports thereafter!" he said.

Singhvi, in response to a question, said the defence minister's statement was both "funny as well as unfortunate".

"Who is the biggest importer of these defence items, it is the defence ministry departments. So the Defence ministry will reduce its imports. Secondly, it will take 3-4 years to reduce the imports," he said.

The country should achieve self-reliance in the private sector instead, he said, adding that the defence ministry could have reduced its imports whenever it wanted to.

The opposition party was reacting after the defence minister announced restrictions on import of 101 weapons and military platforms including artillery guns, assault rifles and transport aircraft, in a major reform initiative to boost the domestic defence industry.

"The ministry of defence is now ready for a big push to #AtmanirbharBharat initiative," Singh said on Twitter while making the announcement.

He said the ministry has prepared a list of 101 items for which the embargo on imports is planned to be progressively implemented between 2020 and 2024. 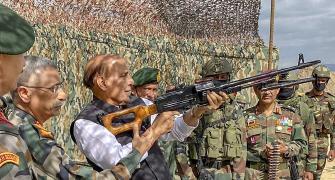 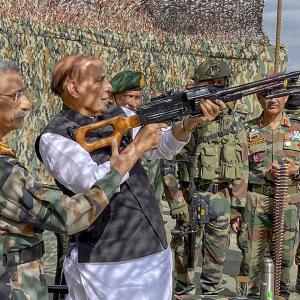 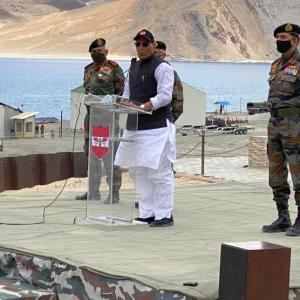 No power can touch an inch of India's land: Rajnath