The Bharatiya Janata Party in Rajasthan will move a motion of no confidence against the Ashok Gehlot-led Congress government in the state assembly, leader of opposition Gulab Chand Kataria said. 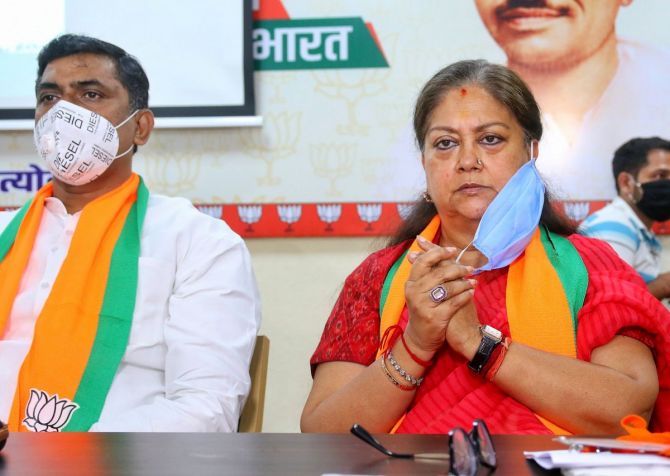 The decision was taken in a BJP legislature party meeting held in Jaipur on Thursday.

After the meeting, Kataria told reporters that the motion of no confidence will be moved in the assembly session beginning Friday. He said the proposal was being finalised.

“Coronavirus cases are on the rise and the law and order situation is badly deteriorating. Attempts were made to link those, who were arrested by the SOG (Special Operations Group) over allegations of conspiring to topple the government, with BJP but the government failed in this. We will mention all these issues in the proposal,” Kataria said.

He said even though the political crisis in the Congress has been resolved, all is still not good in that party as "one is going to east and the other to west".

BJP state president Satish Poonai said the motion will be moved on Friday.

He said the BJP and its ally Rashtriya Loktantrik Party have a total of 75 MLAs and of them, 74 were present in Thursday's legislature party meeting held at the BJP's office.

He said Union agriculture minister Narendra Tomar was also present in the meeting and talked about agriculture-related issues.

Poonia aleged that the Ashok Gehlot-led state government is a "government of contradictions".

BJP MLA Madan Dilawar, who has challenged in the high court the merger of six Bahujan Samaj Party (BSP) MLAs with Congress, said the Rajasthan government has gone into a "state of coma" and therefore the opposition party has to move the no-confidence motion.

“This government is unstable and the works of people are not being done. We already had our preparations for the motion but it was finalised today in the meeting after taking the MLAs in confidence,” he said.

Dilawar also said all 75 BJP and RLP MLAs will support the motion.

The opposition party's decision comes days after an "amicable resolution" of the nearly month-long political cisis in Rajasthan.

He was then sacked as deputy chief minister and the party's Rajasthan chief.

The Congress on Monday had said the crisis in Rajasthan was a "closed chapter" and all legislators supporting its government will work towards strengthening the state government and fighting COVID-19 and economic calamities.