News
Business
Movies
Sports
Cricket
Get Ahead
Money Tips
Shopping
Sign in  |  Create a Rediffmail account
Rediff.com  » News » Rahul warned of bloodbath, not a bullet was fired: Shah on Kashmir

Rahul warned of bloodbath, not a bullet was fired: Shah on Kashmir

Union home minister Amit Shah on Thursday said that the entire world stands by Prime Minister Narendra Modi's decision to abrogate Article 370 in Jammu and Kashmir, while on the other hand, Pakistan stands alone in a corner. 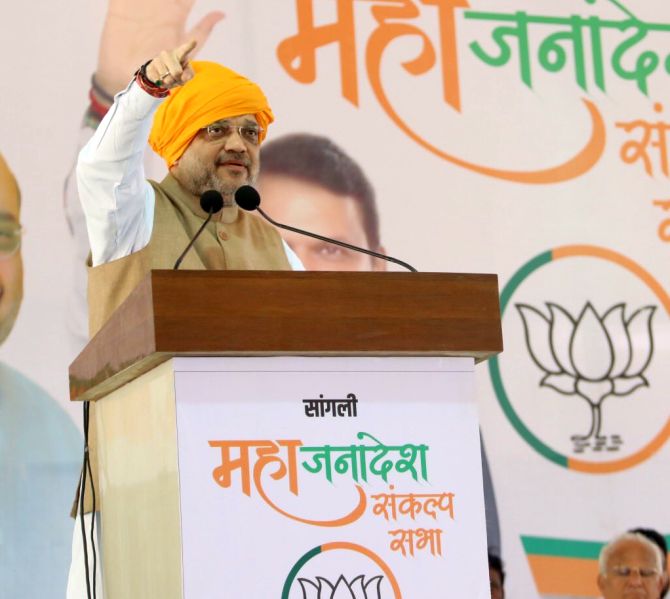 "Prime Minister Modi recently returned from the UN, and the entire world is standing by his decision to abrogate Article 370. On the other hand, Pakistan stands alone in a corner," Shah said while addressing a public rally in Maharashtra's Sangli.

Shah also criticised the Congress party and the Nationalist Congress Party for opposing the central government's decision to abrogate Article 370 in Jammu and Kashmir.

"When Prime Minister Modi brought the proposal to abrogate Article 370, both the Congress and the NCP were against it and were revolting against it. I want Rahul Gandhi and Sharad Pawar to answer to the people of Maharashtra why they were against the removal of Article 370," he said.

Shah stated that they opposed the decision to do vote bank politics and added, "Rahul Gandhi said that Kashmir me khoon ki nadiya beh jayengi, but no bullet had to be fired."

He further said that Atal Bihari Vajpayee was the first person to congratulate former Prime Minister Indira Gandhi on India's victory after the India-Pakistan war in 1971.

"We were in the opposition then, but for us, the nation comes first," he said.

Shah said that during the Manmohan Singh-led government, terrorists from Pakistan would enter through our borders regularly and kill our soldiers.

"Prime Minister Modi has worked towards safeguarding the nation," he said.