Congress leaders Rahul Gandhi and Priyanka Gandhi Vadra were on Tuesday stopped by the police from entering Meerut on their way to meet the families of those who died during protests against the Citizenship Amendment Act. 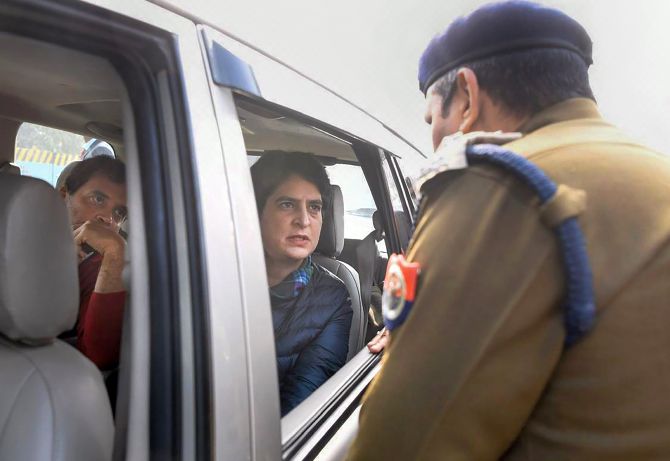 The two had requested that they, along with another Congress leader Pramod Tiwari, be allowed to meet the families, but were denied entry, Congress sources said in Delhi.

The Gandhis were stopped near Partapur Police Station.

"We asked the police to show us order, but they did not show any order for stopping us and told us to return," Rahul Gandhi told reporters.

According to a police statement, Rahul and Priyanka were served a notice which said section 144 of the CrPC has been imposed and the situation in Meerut was sensitive.

"They were told that they will be held responsible for any deterioration of law and order situation in the district due to their visit," the statement said.

Both were conveyed that the police will have no objection if they wanted to visit the district peacefully. They both went back on their own, it added.

In Delhi, Congress leader and former Rajya Sabha MP Pramod Tiwari said the police gave them in writing that the situation in Meerut was very sensitive and tense and thus, did not want us to visit the area.

The police conveyed that Rahul Gandhi and Priyanka Gandhi can meet the victim families in the next few days once the situation normalises, Tiwari said.

Tiwari, who accompanied, the Gandhis, said when Priyanka Gandhi visited Bijnore on Sunday there was no tension and neither any political activity, and instead the area was peaceful.

Tiwari wondered what the police was trying to hide by not not allowing them to meet the families.

The Congress leader also alleged that the BJP does not want peace and is bound to create trouble and tension between communities in Uttar Pradesh, as well as elsewhere.

"We were stopped and were told to visit three days later. Our intention was peaceful and we did not want to aggravate the situation. We expect that the police will fulfil their promise of helping us meet the aggrieved families in Meerut in the next few days," he told reporters.

At least five protesters died in Meerut alone last week during the protests.

Later, senior state Congress leaders Imran Masood and Pankaj Malik met the victims' families. A Congress spokesperson said that the Gandhis will again try to meet the families on Wednesday.

Priyanka Gandhi had on Sunday met the families of some of the protesters who died in Bijnor. Seventeen people are reported to have died in Uttar Pradesh during protests against the new citizenship law.

A four-member Trinamool Congress delegation, which was scheduled to meet the grieving families of those killed in Uttar Pradesh during protests over the new citizenship law, was also detained at Lucknow airport on Sunday afternoon.

Asked about the National Population Register, he said they will only speak after knowing the details of the proposal.

"But, it seems like the distance between the home ministry and the prime minister's office has increased," he said.

Meanwhile, Punjab chief minister Amarinder Singh and Rajasthan chief minister Ashok Gehlot hit out at the Uttar Pradesh government for not allowing the Gandhis to enter Meerut and meet the victim's families.

Terming it an "uncalled for action", Singh slammed the Uttar Pradesh government for the "spate of curbs it has imposed on the opposition and citizens protesting against the CAA".

Gehlot termed the action as "undemocratic and unfortunate".

"It is absolutely undemocratic and unfortunate that senior Congress leaders, Rahul ji and Priyanka ji were stopped by UP police from meeting families of victims killed during anti CAA protests. Govt is not letting the opposition to stand in solidarity with the victims," Gehlot tweeted.

"Rahul Gandhi ji and Priyanka Gandhi ji were stopped by Uttar Pradesh police while they were going to meet victim's family members who died in violence during anti CAA and NRC protest in Meerut. I strongly cobdemn the undemocratic decision of Uttar Pradesh government," Pilot tweeted. 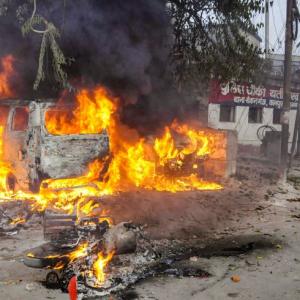 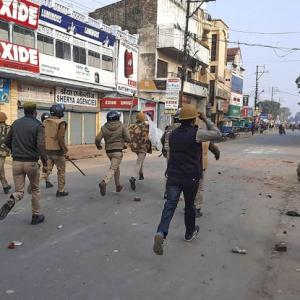