UP PFI head, 30 others arrested for violence during anti-CAA protests 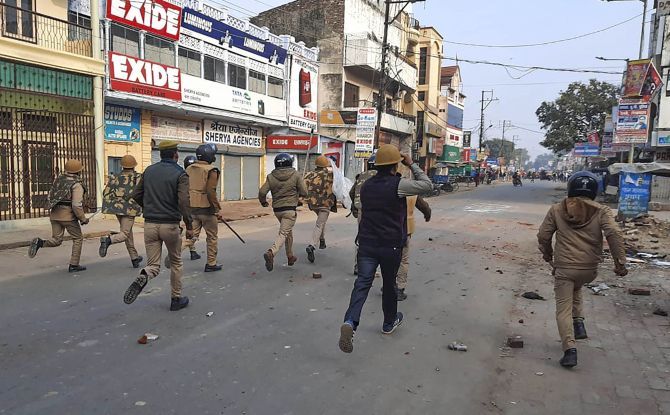 IMAGE: Police personnel clash with protesters during a rally against the Citizenship Amendment Act, in Bahraich district of Uttar Pradesh, on Friday. Photograph: PTI Photo

Uttar Pradesh Police on Monday said they have arrested 31 people, including the state head of Popular Front of India (PFI) and 16 other workers of the Islamist outfit, in connection with the violence in the state capital during the protests against the amended Citizenship (Amendment) Act, 2019 (CAA) last week.

Wasim, the state head of the outfit, was arrested for allegedly masterminding the violence, the police said.

In Shamli district in western Uttar Pradesh, 28 people, including 14 members of the PFI, have been arrested since December 19 for allegedly attempting to incite mass gatherings during anti-CAA protests.

"Total 14 PFI members including Mohammad Shadab, a prominent member of PFI, have been arrested. Two PFI members are wanted. Another 14 people were also arrested in the district," Shamli SP Vineet Jaiswal told PTI.

On December 19, the situation was tense in Shamli and its Kairana town and around 150 people were taken into preventive custody and released later in view of violent protests unfolding in other parts of the state, he said.

"We have got success in arresting the mastermind of Lucknow violence. Wasim, Nadeem and Ashfaq of PFI have been arrested by the police. While Wasim is the state head, Ashfaq is the treasurer and Nadeem is a member of PFI," SSP, Lucknow, Kalanidhi Naithani told reporters.

UP Deputy Chief Minister Dinesh Sharma had on Sunday said that authorities suspect the role of PFI and Students Islamic Movement of India (SIMI) in the violence during the anti-CAA protests in the state which claimed 18 lives and left hundreds of people, including many policemen, injured.

Police have seized placards, flags, pamphlets and papers, literature, newspaper cuttings and banners and posters of NRC/CAA protest from them, the SSP said.

During interrogation, Nadeem and Ashfaq told police that they made the strategy for December 19 protests and publicised it on social media, he added.

The official said 33 first information reports have been filed in the state capital and 150 people arrested so far.

He said Robin Verma and Mohammad Shoaib of the Rihai Manch have already been arrested for their involvement in inciting the mob.

Nadeem and Ashfaq incited people for the protest through WhatsApp and other platforms by sharing literature and video, Naithani said.

Official sources said the UP police had got intelligence inputs about PFI 'planning unrest' Kairana and Kandhla towns of Shamli.

"Some of the PFI members who were detained had made trips to Kerala and met suspicious people there. Their link to violence in UP's Muzaffarnagar, Meerut and Firozabad, etc is under investigation," the sources told PTI.

On Monday, the state remained peaceful with no report of any untoward incident and Director General of Police OP Singh issued directives to police officials to go for 'qualitative investigation' into the cases registered against the people who took part in anti-CAA protests.

The police also claimed that more than 700 cartridges were seized during the protests in the state and maintained that they did not use any of them.

'Law and order is under control and the situation is normal in UP. 213 FIRs have been filed, 925 persons have been arrested so far (since Dec 10) in connection with anti-CAA protests in the state,' an official statement issued by the police said.

As many as 288 policemen have suffered injuries, of which 62 have been caused from firearms.

Later in a statement, they said 81 cases have been registered and 120 people arrested so far for posting objectionable remarks and content on social media.

Action has been taken against 16,761 social media posts.

Meanwhile, a video has gone viral in which a sub-inspector is purportedly seen loading his pistol as gunshots apparently ring out. The 90-second video shows a khaki-clad policeman with a chest guard and helmet loading his pistol during a protest against the amended law.

The video appeared to be from Yateemkhana area in Kanpur.

Senior police officials, including IG Mohit Agarwal, have claimed that police did not open fire to control the protesters.

The police blamed 'outsiders' associated with Islamist outfits like PFI and SIMI for the violence in which 17 people died in the state during protests against the new law. 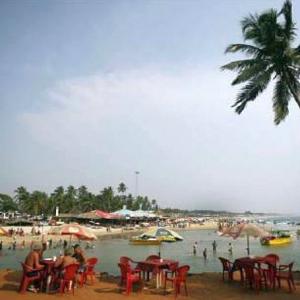