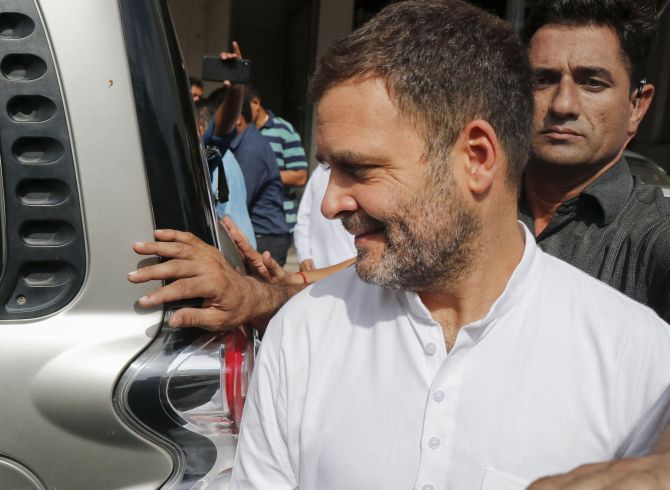 Congress leader Rahul Gandhi was on Friday granted bail by a court in Ahmedabad after he pleaded not guilty in a criminal defamation suit filed by Ahmedabad District Cooperative Bank, in which Union Home Minister Amit Shah is one of the directors, and its chairman Ajay Patel.

The defamation suit was filed by the bank against Gandhi after he alleged that it had swapped Rs 750 crore in scrapped currency with valid notes within five days of announcement of demonetisation on November 8, 2016.

Additional Chief Metropolitan Magistrate N B Munshi asked Gandhi, as he appeared in the court, if he accepted the charges. The Congress leader pleaded not guilty.

His lawyer then applied for bail, which was granted. Gandhi had levelled the allegations on Twitter last year.

The court had issued him summons on April 9 after finding that there was prima facie (on the face of it) some evidence against him.

The demonetisation was announced by the Narendra Modi government on November 8, 2016.

The complainant said that the Congress leader levelled 'false and defamatory allegations' against the bank.

Before issuing the summons, the court conducted an inquiry under section 202 of the Code of Criminal Procedure to decide whether there are sufficient grounds for proceeding against him.

While Gandhi's allegation was based on a reply purportedly given by the National Bank for Agriculture and Rural Development (NABARD) to an RTI query, ADCB denied that it exchanged such a huge amount of scrapped currency.

Rahul Gandhi is facing multiple defamation cases across the country, including one filed by Bihar deputy chief minister Sushil Kumar Modi over his jibe that all 'thieves' seemed to have Modi as surname.

Another case against him, filed in a Mumbai court, relates to his statement linking the murder of journalist Gauri Lankesh with 'RSS-BJP ideology'.

Before appearing before the Ahmedebad court, Gandhi said he was thankful to his opponents for providing him with opportunities to take his ideological battle against them to the public.

'I'm in Ahmedabad today, to appear in another case filed against me by my political opponents in the RSS/BJP.

'I thank them for providing me these platforms & opportunities to take my ideological battle against them to the public. Satyameva Jayate,' he said in a tweet after reaching the city.