Rahul goes abroad on 'meditational visit' ahead of Cong protest

Congress leader Rahul Gandhi is on a "meditational visit" abroad and is likely to return shortly, party sources said on Wednesday. 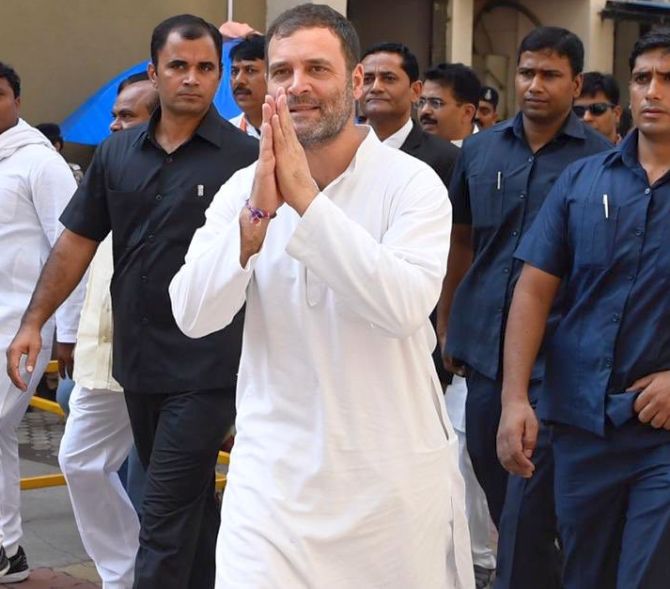 Responding to speculation on the former Congress president's absence, Congress chief spokesperson Randeep Surjewala said Gandhi was away at one of his regular "meditational visits".

Sources in the party added that Gandhi is possibly in Indonesia for a meditation session and will be back home soon.

"Shri Rahul Gandhi has gone from time to time in the past on meditational visits. He is currently on one such visit," Surjewala said when asked about the former Congress president.

Surjewala said the party's 10-day agitation was formalised at a meeting in which Rahul Gandhi participated in, but neither he nor Sonia Gandhi would be participating in the state and district level programmes.

The Congress has planned a country-wide agitation from November 5 to 15 to highlight the issues of economic slowdown, farm distress, rising unemployment and job losses and the consequences of the RCEP (Regional
Comprehensive Economic Partnership) trade agreement.

"This entire programme was drafted as per his direction and in consultation with him. He guided the party on to the various steps and issues that were to be taken. Shri Rahul Gandhi was present and participated in the meeting where this programme was taken up. Neither Sonia ji nor Rahul ji are going for state agitation or district agitational programme, he said.

Congress general secretary organisation K C Venugopal said in a statement that the protests against the BJP Government's "misrule" would be carried out at all state capitals and district headquarters.

The protests will culminate in a "massive programme" in the national capital in the last week of November, he said, adding that at the state level, the PCC presidents, CLP leaders and senior AICC functionaries will provide the leadership, while central leaders will participate in the protest in Delhi.

He said the Congress will highlight the issues of the "adverse impact of the RCEP, current economic crisis, mounting unemployment, spiralling price rise, collapse of banking system, heavy loss of jobs in public and private sectors and the omnipresent farm distress".

"The Congress party workers and its volunteers will raise the voice of the people and try to make this insensitive central government accountable for the countless miseries and sufferings that it is causing,"
Venugopal said.

Congress President Sonia Gandhi has also convened a meeting of AICC general secretaries, state in-charges, heads of frontal organisations and departments on Saturday, November 2, 2019, for reviewing the preparations for this agitation.

The Congress has already decided to depute 31 senior party leaders as observers to various states/UTs to monitor this country-wide agitation programme.

"The party sincerely appeals to all citizens across the country to come forward and make this arrogant Government listen to their voices," he said.

These several pressers across the country have been lined up from November 1 to 8 to highlight the shortcomings of the government in handling the economy and other issues.

Mallikarjun Kharge would hold a presser in Jaipur, Jairam Ramesh in Delhi, A K Antony in Thiruvanathapuram, Ghulam Nabi Azad in Hyderabad, Ambika Soni in Jammu, Ajay Maken in Lucknow, and
Abhishek Singhvi in Raipur.

The Congress is seeking to drive home the point that under the BJP, unemployment has touched a 45-year high, the economy is on a downturn, the trouble faced by farmers and against the proposed Regional
Comprehensive Economic Partnership, party leaders said.

The Congress says the 16-country trade pact is not good for India and that it is not the right time to sign such an agreement that will allow easy Chinese imports, as India's economy is already in a bad shape.