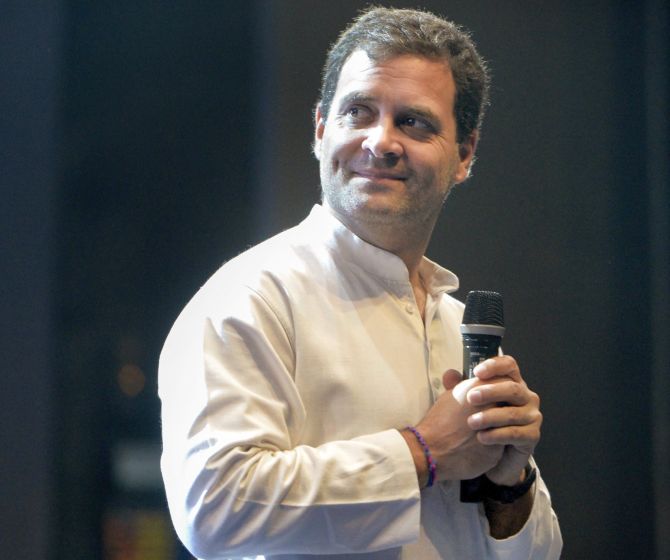 The Congress on Sunday launched an all out attack on the Modi government alleging that there had been 'no development' in the first 100 days of its second term, with Rahul Gandhi saying there was a 'glaring lack' of leadership, direction and plans where it is needed the most -- to turnaround a 'ravaged economy'.

Congress' senior spokesperson Kapil Sibal, addressing a press conference, also alleged that the government's 100 days in office have been characterised by 'arrogance, uncertainty and vendetta politics'.

He attacked the dispensation over issues such as the state of the economy, the situation in Kashmir, the National Register of Citizens in Assam and action by probe agencies against opposition leaders.

Taking a dig at the Modi government, Gandhi 'congratulated' it on 100 days of 'no development'.

'Congratulations to the Modi govt on #100DaysNoVikas, the continued subversion of democracy, a firmer stranglehold on a submissive media to drown out criticism and a glaring lack of leadership, direction and plans where it's needed the most -- to turnaround our ravaged economy,' he tweeted.

Congress general secretary Priyanka Gandhi Vadra said the Modi government is mum after 'ruining the economy' and alleged it is trying to hide the grim situation in the country.

'The government is mum after ruining the economy. The companies are in danger, while trade is in doldrums,' she said in a tweet in Hindi.

'Through drama, deceit, lies, and propaganda, they are trying to hide the country's grim situation,' she said, using the hashtag '100DaysNoVikas' (100 days, no development).

'Three words that describe the first 100 days of BJP 2.0 - tyranny, chaos and anarchy,' the Congress said earlier in a series of tweets.

'Eight sectors have recorded a growth rate below two per cent and our finance minister still refuses to accept that our economy is in free fall. If the BJP continues this path of negligence & deceit, we are headed towards recession,' the party said.

Sibal said the massive mandate to the BJP in the Lok Sabha polls had given it an opportunity to provide relief to the common man, but what happened was the opposite.

'Common man's problems are increasing, lapdog media is becoming even more biased, atrocities against women increasing, there is no strategy on education and health, small trader is in distress, and there is vendetta politics against political opponents,' he alleged.

He claimed that the Enforcement Directorate, Income Tax Department and Central Bureau of Investigation (CBI) are being misused.

"Where there is evidence against their own people, they are sheltering them, and action is being taken against opposition leaders against whom there is no evidence," Sibal said.

The government's arrogance reflects in legislations being passed without parliamentary scrutiny as well as in decisions such as abrogation of Article 370, dilution of the Right to Information Act, criminalisation of triple talaq, merger of banks and the Reserve Bank of India made to transfer 1.76 lakh crore record surplus to the government, he said.

"The agencies apply the law selectively on opposition leaders while those belonging to the BJP are given an easy escape route," he said, listing cases such as those of Kuldeep Sengar (Unnao rape accused), Mukul Roy (Saradha chit fund scam), Karnataka CM B S Yediyurappa (land and mining scam) and Shivraj Singh Chouhan (Vyapam scam).

Uncertainty prevailed in the Modi government 2.0's first 100 days and with the abrogation of Article 370, Kashmir braces for an 'uncertain future', Sibal said.

"Tourism, trade and horticulture industries are registering huge losses. At least 2,500 hotels are empty. 15,000 salesmen working in major markets have lost their jobs...While the government has directed schools to open, parents prefer not to send their children to school owing to the prevailing situation," he said.

The former Union minister said he was surprised over the government's assertion that easing of curbs in J-K depends on 'Pakistan's behaviour'.

"I didn't understand what this statement means? If Pakistan continues terror activities, then you will not bring any improvement in the condition of your citizens," he asked.

On the NRC, Sibal said many of the 1.9 million people, who are genuine citizens have been left out which has created chaos and they brace an uncertain future.

He alleged there was a lot of 'anguish' prevailing in the country over the slump in the auto industry and highlighted the problems being faced by textile, gold and real estate sectors.

Citing figures from the Centre for Monitoring Indian Economy (CMIE), he said the overall unemployment has now touched 8.2 per cent, with urban unemployment as high as 9.4 per cent.

The Congress, in a short video on its official Twitter handle, hit out at the BJP over issues such as 'unemployment, dilution of RTI, UAPA, GDP, bank frauds, lynchings, falling of rupee, J&K bifurcation, and mishandling of NRC'.

On lynchings in the country, it said, "The term 'mob lynching' in the BJP government has greatly damaged India's fraternity. Involvement of people associated with the ruling ideology in promoting mobilized violence is a big threat to the unity, the integrity of the country."