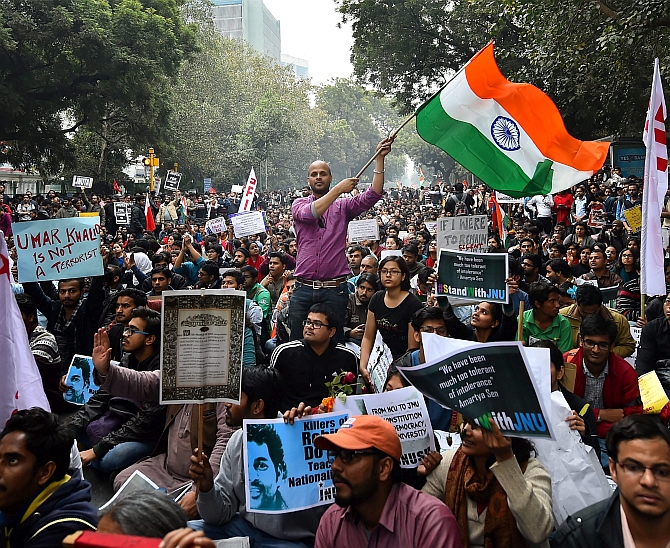 The large number of student protests at Jawaharlal Nehru University only indicates "there is something wrong somewhere", the Delhi high court told the varsity on Friday while allowing the students to agitate near the admin block.

Justice Sanjeev Sachdeva made the observation after the Jawaharlal Nehru University said that in the past nine months there have been 92 protests in the campus and these were disrupting the functioning of the varsity.

While directing the students that varsity functioning should go on, the court allowed them to protest in the front garden and pavement of the administrative block with the conditions that the exit and entry routes to the building be not blocked and the decibel levels are kept low.

To this extent, the court modified its earlier order of March 9 restraining the students from protesting within 100 metres of the block.

It did not accept the JNU's request for continuing with the earlier order, saying, "What would be the purpose of the protest if it was not visible and was held at some remote corner."

While modifying its order, the court said it was looking to protect bonafide students of JNU and stressed that no outside organisation or association be allowed to dictate how the varsity or its students should function.

During the hearing, the court asked whether the JNU has ever introspected as to why so many protests, almost 10 every month, were being held there only and not in any other university.

"Why so many protests are happening there only and not in other universities? There is something wrong somewhere. We have to look at the root cause. All the reasons for the protests may not be frivolous," it said.

The court also said "who would want to agitate if other means are available" and asked the JNU to evolve a mechanism to differentiate between genuine and frivolous grievances of the students and to resolve these by way of dialogue.

It said, "Educational environment should revive in the JNU, but it is not happening."

To ensure a proper dialogue is held and the varsity officials are not swamped by large numbers of students showing up for a meeting, the court asked the JNU Students Union to nominate 3-4 persons who would represent them.

The judge asked JNUSU President Mohit Pandey, who was present in court, to call a joint meeting of all student associations in the JNU to select the persons who would be part of the dialogue with the varsity officials.

Till the representatives are selected, the court modified its previous order restricting students from protesting within 100 metres of the administrative block and listed the matter for further hearing on March 30.

The court was hearing the JNU's plea against the blocking of its administrative block by agitating students.

The varsity also moved an application against Thursday's protests there, saying because of the agitation, which was accompanied with drum beats, outside the admin block, no one could enter the building.

The JNUSU denied holding the protest outside the admin block and said it was done by the Birsa Ambedkar Phule Students Association against the alleged suicide by Dalit scholar Muthu Krishnan.

The court also told the students union that since the JNU's admission policy, based on the University Grants Commission's notification capping seats for MPhil and PhD courses, has been upheld by a judicial order, they should take legal recourse against it instead of agitating.