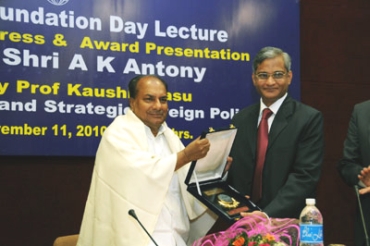 Srikanth Kondapalli, associate professor of Chinese studies at the Jawaharlal Nehru University, on Thursday received the K Subrahmanyam award which was conferred to him by the Institute of Defence Studies and Analysis.

The award was handed over by Defence Minister A K Antony, who said, "I take this opportunity to heartily congratulate Dr Srikanth Kondapalli for winning this year's K Subrahmanyam Award. This is the fourth award in the series and its conferment recognises Dr Kondapalli's outstanding work on China, especially its armed forces. We attach great importance to our relations with China. I hope that this award will provide impetus to other researchers to go in for more intensive research work on China."

Kondapalli is an unusual scholar who hails from the Telganana region of Andhra Pradesh. He speaks English, Chinese and Telugu fluently. He possesses a unique combination of a sharp brain, scholarly dry humour and a mischievous smile that can floor any Chinese and American scholar when he is arguing a case for India's national interest.

Along with extensive reading, writing and teaching, Kondapalli also travels a lot. Few Indians in recent times have published as much actual work on China as he has. Kondapalli has also served for 12 years at the IDSA, the institute that conferred the prestigious award on him.

Kondapalli was been educated in Chinese studies in India and China with specialisation in Modern Chinese History at the Osmania University at Hyderabad. He earned his MA and PhD in 1989 and 1995 respectively at the Chinese Studies Division at the School of International Studies, Jawaharlal Nehru University.

But above all, Srikanth's forte is his knowledge about the People's Liberation Army. He has published many books but he received due recognition after the publication of China's Military: The PLA in Transition and China's Naval Power. With K Santhanam, he co-edited the book Asian Security and China 2000-2010. His monographs on People's Liberation Army: Evolving Dynamics are useful for students and scholars studying China's affairs.