Probe everybody including PM Modi in Rafale deal: Rahul Gandhi

Ratcheting up his attack on the Bharatiya Janata Party government over the Rafale aircraft issue, Congress president Rahul Gandhi asked on Thursday why a probe cannot be ordered against Prime Minister Narendra Modi for a “Rs 30,000-crore scam” when an investigation has been initiated into the theft of official documents related to the fighter jet deal. 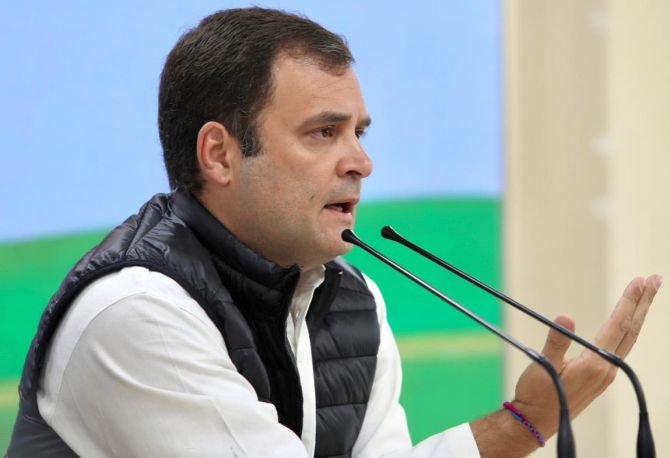 Addressing a press conference, Gandhi accused the prime minister of performing a bypass surgery in the deal and the government of manipulating institutions to “save” him.

“Justice should be for all. Investigate everyone, but probe Modi as well” as it has emerged in the official files that the Prime Minister’s Office was involved in parallel negotiations in the fighter jet deal, he said.

The parallel negotiations “retarded” the delivery of Rafale. The aircraft could not come earlier because “you wanted to give Anil Ambani Rs 30,000 crore”, he alleged.

Gandhi also took a swipe at the government over Attorney General K K Venugopal telling the Supreme Court on Wednesday that the Rafale files were stolen from the defence ministry.

“Gayab ho gaya” is the new tagline of the Modi government, he said, adding the Rafale files had disappeared like jobs for youths, right prices for farmers’ produce, and the promises of Rs 15 lakh to everyone, farmers’ insurance, black money after demonetisation and Dokalam.

“An interesting thing happened yesterday... The government said the media will be investigated, but there is no probe against those involved in the Rs 30,000-crore scam. The government is protecting Narendra Modi, the ‘chowkidaar’, at any cost,” he told the press conference.

“The prime minister delayed the Rafale deal... The parallel negotiations retarded the delivery of Rafale. The aircraft could not come early because you wanted to give Anil Ambani Rs 30,000 crore,” he alleged.

The government has constantly rejected the allegations levelled by the Congress with the BJP accusing Gandhi of spreading lies to torpedo the Rafale deal due to his vested interests. Ambani has also rejected corruption allegations.

“You do whatever you want to do legally, but justice should be for all. If files have been stolen, then you are accepting that the stories based on those documents are true...Why should not there be a criminal investigation? When a probe can be ordered against anyone who opposes the prime minister, then why not against Narendra Modi?” he asked.

Hitting back at Modi for calling the Congress a “poster boy” of Pakistan for questioning the air strike on terror camps in Balakot, Gandhi said “it is he who is Pakistan’s poster boy, not us”.

He recalled that the Modi government had invited Pakistan’s spy agency ISI to India to probe the Pathankot terror attack and then Pakistan prime minister Nawaz Sharif to attend his swearing in.