She claimed that she was surrounded, held by the throat by a female cop and pushed by another female cop. 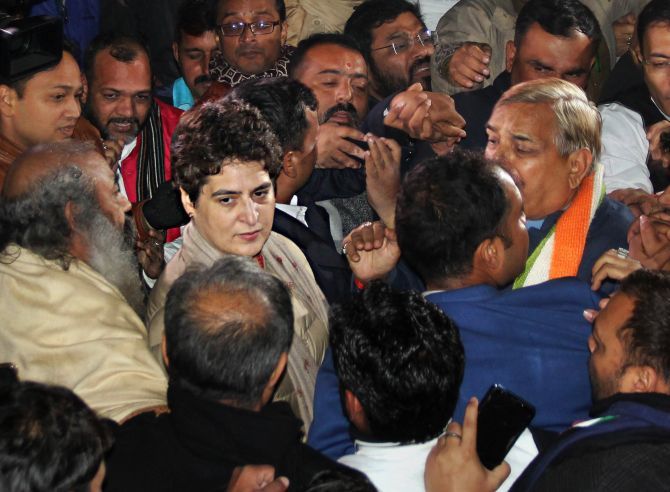 A high-voltage drama unfolded here on Saturday evening as Congress leader Priyanka Gandhi Vadra virtually gave a slip and some tense moments to police, and reached the residence of retired Indian Police Services officer S R Darapuri, who has been arrested in connection with the recent protests over the Citizenship (Amendment) Act (CAA).

The Congress general secretary claimed that she was surrounded, held by the throat by a female cop and pushed by another female cop.

After meeting Congress workers, she headed for the Indira Nagar (Sector 18) residence of Darapuri.

Uttar Pradesh Congress spokesperson Ashok Singh told PTI, "Her vehicle was stopped at the Lohia crossing. She protested and asked as to why was she being stopped."

Singh said when the police stopped the Congress leader, she started walking.

"The policemen started following her. After walking for almost a kilometre, she again got into her vehicle. After this, when the police tried to stop her in the Munshipulia area, she again started walking and then suddenly turned towards a bylane in Indira Nagar's sector 18.

"She walked for almost three-four kilometres and gave a slip to the police as well as the party workers," he added.

"The entire traffic has come to a halt and people are feeling disturbed. There is no reason to do so. God knows, ask them why have they stopped (us)," Priyanka Gandhi told reporters.

"What is the reason for stopping us, that too in the middle of the city? This is not an issue of the SPG, but of the Uttar Pradesh police. There is no point stopping us.

"Will you stop (anyone) in the middle of a crossing?" she asked a police official.

Narrating her experience, Priyanka Gandhi told reporters, "As we were on our way, suddenly a police vehicle came in front of us and the policemen said you cannot go. I asked them why and was told that we will not be allowed to move ahead.

"I got off the vehicle and started walking. I was surrounded and a woman cop held me by my throat. Another woman cop pushed me and I fell down.

"I was forcibly stopped and a woman officer pulled me up by my neck. But I was determined. I am standing with every citizen who has faced police oppression. This is my 'satyagraha'."

She also said, "The BJP government is working in a cowardly manner. I am the in-charge of (eastern) Uttar Pradesh Congress and the government is not going to decide where will I go in the state."

After meeting Darapuri's family members, she told reporters, "I was going in a peaceful manner, how was the law-and-order scenario going to deteriorate? I did not tell anyone about this (visit), so that not more than three persons accompany me.

"They do not have the right to stop me. If they want to arrest me, they should do so."

To a question on whether the government felt its politics was in danger because of her, she said, "Everybody's politics is in danger."

Meanwhile, Uttar Pradesh Congress chief Ajay Kumar Lallu said, "If we want to meet someone and share his sorrows, why is it causing a stomach ache to the government? This government is feeling scared of Priyankaji. Hence, she was stopped."