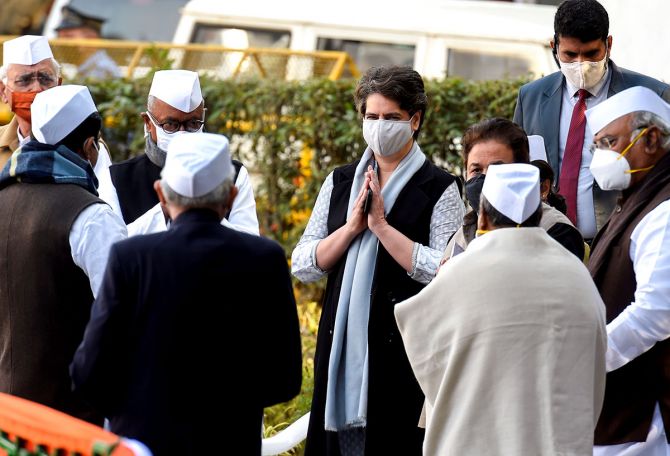 She not only participated in the programme, but her presence was also noted when she engaged with the media on the issue of protesting farmers.

During Monday's event, she also interacted with party workers, and they felt connected her and found her "positivity infectious".

Eyewitnesses said that when Priyanka Gandhi was escorted to the main porch of the party headquarters, she surprised everyone and turned towards the women workers of Sewa Dal for a chat and a quick selfie.

"While she was leaving after the programme, one prominent leader from Maharashtra approached her for some discussion. She listened to him and asked him to meet her later for a detailed discussion. After that, another AICC secretary from Uttar Pradesh approached her. She again stopped and listened to him in detail before leaving. Her gestures become the topic of discussion among the party leaders and workers who were disheartened by the absence of Rahul Gandhi and Sonia Gandhi," the eyewitness said.

Notably, Priyanka Gandhi is becoming a ray of hope during the hours of crisis in the party.

The party insiders said that she managed the Rajasthan crisis when leader Sachin Pilot had fallen out with Chief Minister Ashok Gehlot.

"She approached Sachin Pilot on a personal level, even though Sonia Gandhi had sent K C Venugopal, Randeep Surjewala, Ajay Maken to Jaipur as crisis managers from AICC. Priyanka Gandhi also played a crucial role in breaking the ice between the dissenting leaders and party leadership," the source said.

"Former Chief Minister of Madhya Pradesh Kamal Nath recently met with Sonia Gandhi and urged her to meet dissenting leaders. Priyanka Gandhi stepped in and convinced the interim president to meet the leaders. She approached many senior leaders personally too," they added.

The sources said the Priyanka Gandhi also played a positive and constructive role in the party's internal meeting at Sonia Gandhi's residence on December 19.

"She calmed the dissenting leaders and urged them to work together to strengthen the party. She also sat on a dharna on farmers' issue and was detained by Delhi Police. After she was released by the police, she had a long meeting with workers and leaders of Uttar Pradesh Congress via video conferencing," they added.