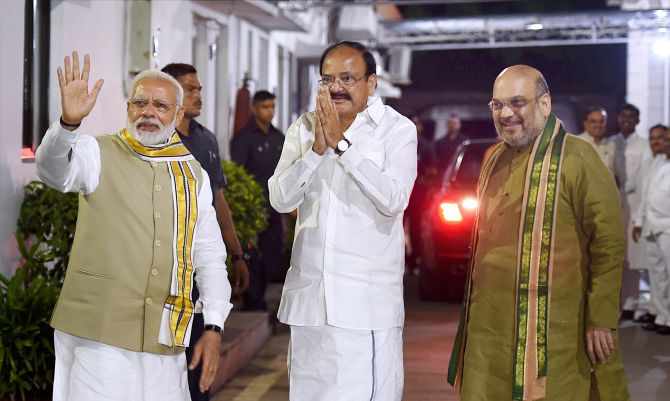 In the 1970s when Bharatiya Janata Party's precursor Jana Sangh was a marginal player with little clout in the south, a young party worker kept himself busy putting up posters of stalwarts such as Atal Bihari Vajpayee and L K Advani.

Muppavarapu Venkaiah Naidu has come a long way since those days of political obscurity to be chosen on Monday as the National Democratic Alliance's candidate for vice president, a post he is almost certain to occupy.

He was however elected to the Rajya Sabha three times from Karnataka and currently represents Rajasthan in the Upper House of Parliament.

Once an Advani protege, Naidu vigorously backed Narendra Modi for the prime minister's post before the 2014 elections. Naidu currently holds the portfolios of information and broadcasting and housing and urban affairs. He was also minister of parliamentary affairs in the Modi government.

Earlier, he had served as rural development minister in the previous NDA government led by Vajpayee.

The 68-year-old veteran party leader also served as the BJP national president from July 2002 to October 2004 for two consecutive terms. 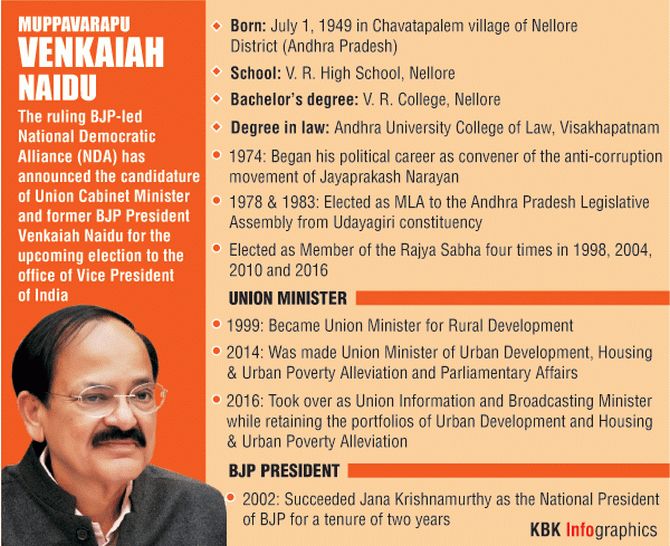 As the first Minister of Parliamentary Affairs in the Modi government, Naidu had defended the prime minister and the government whenever the opposition targeted them in both the houses of Parliament.

He had also ensured high political outreach by meeting Congress Chief Sonia Gandhi when there was a standoff between the government and the opposition in Parliament.

Several major legislations were cleared by Parliament when he was Parliamentary Affairs Minister, including the historic Real Estate Act and fast forwarding of the GST Bill.

Known for coining acronyms, Naidu termed the mission of the Modi government as 'MODI- Making of Developed India' which had become the official line of the Centre in its public outreach campaign on the occasion of three years of being in office.

As the minister for information and broadcasting, he was always quick to present issues in perspective with effective repartee as and when required.

As minister of urban development and Housing and Urban Poverty Alleviation, which was recently merged as housing and urban affairs, Naidu pioneered the launch of several new urban missions, including the Smart City Mission, Atal Mission, Swachh Bharat Mission and Housing for All.

When the Congress swept the polls in Andhra Pradesh in 1978, Naidu got elected as MLA from Udayagiri Constituency as a Janata Party candidate. 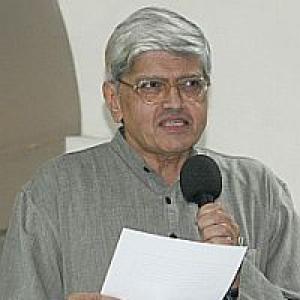