In a bid to end the impasse inParliament, the government reached out to the Bharatiya Janata Party saying it was ready for a discussion on 2-G spectrum issue and a Supreme Court-monitored CBI probe but rejected the demand for a JPC, which failed to cut ice with the main opposition.

Leader of the House in Lok Sabha and Finance Minister Pranab Mukherjee today called National Democratic Alliance working-chairperson L K Advani and Leader of Opposition in Lower House Sushma Swaraj to discuss the continuing deadlock in Parliament since November 10 over opposition demand for a JPC probe.

Sources said Mukherjee told the two BJP leaders that government could not agree to a JPC probe as the earlier experiences have not been good. He recounted the Bofors and Harshad Mehta stock scams in which JPC probes were held and maintained that they became political and the opposition turned them into election issues to garner votes.

Mukherjee suggested that instead of a JPC probe, a full-fledged debate on 2-G Spectrum allocation scam can be held in Parliament. This was rejected by the BJP leaders who said discussions have already been held in earlier sessions of Parliament on the scam.

scam. But this prompted the two leader to ask as to how the government could ensure this. The BJP leaders conveyed to Mukherjee that they were firm on their demand for a JPC probe and would not give it up.

"The government is primarily and constitutionally accountable only to Parliament. The best and only option in this case is a JPC probe," Deputy Leader of BJP in Rajya Sabha S S Ahluwalia said.

Meanwhile, Speaker Meira Kumar was apparently keen to hold all-party meeting on Monday at 1600 hrs to find a way out of the Parliament impasse. But since Swaraj and Leader of Opposition in Rajya Sabha Arun Jaitley will be away in Bhopal to attend a programme on Monday to mark five years of Shivraj Singh Chouhan's tenure as Chief Minister of Madhya Pradesh, the meeting had to be postponed. It may now be held late in the evening on Monday or on Tuesday morning.

BJP sources said, Advani and Ahluwalia are likely to lead the opposition charge in forcing adjournment of the Lok Sabha and Rajya Sabha respectively over the JPC probe demand. 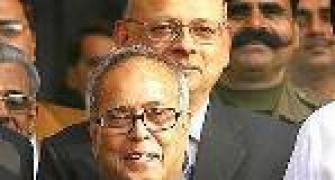 Economy to grow by 8.5% this fiscal: FM
Govt should have pulled up cola firms: JPC
Pranab Mukherjee in charge of finance ministy