The Indian Navy said it was in a high state of readiness to "deter, prevent and defeat" any "misadventure" by Pakistan in the maritime domain. 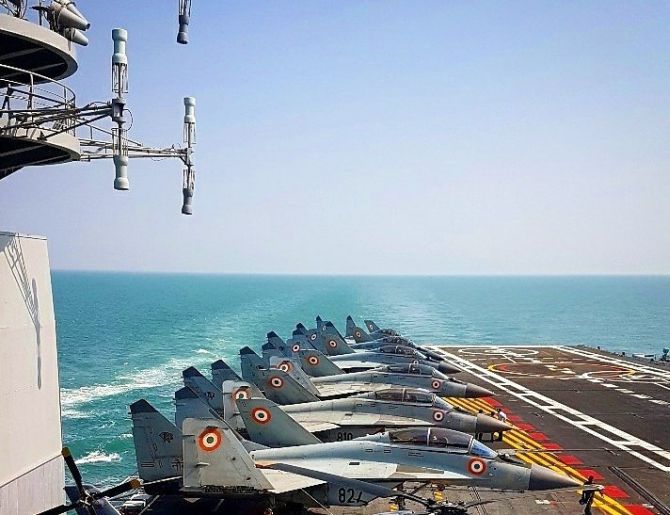 Aircraft carrier INS Vikramaditya, nuclear submarine Chakra, 60 ships and nearly 80 aircraft were put on operational deployment by the Indian Navy in the North Arabian sea in the wake of escalating tension between India and Pakistan following the Pulwama terror attack, officials said on Sunday.

They said the naval assets were part of a mega exercise but they transited from the area of the drill for operational deployment soon after the dastardly attack on February 14 in which 40 Central Reserve Police Force personnel were killed.

At a tri-services press conference on February 28, the Indian Navy said it was in a high state of readiness to "deter, prevent and defeat" any "misadventure" by Pakistan in the maritime domain, reflecting a sense of its preparedness as well as seriousness of the situation.

"The major combat units of the Indian Navy including the Carrier Battle Group with INS Vikramaditya, nuclear submarines and scores of other ships, submarines and aircraft swiftly transited from exercise to operational deployment mode as tensions between India and Pakistan escalated," navy spokesperson Capt D K Sharma said.

The naval assets comprising 60 ships of the Indian Navy, 12 ships of the Indian Coast Guard, and 60 aircraft were part part of the theatre level operational readiness exercise (TROPEX 19), which commenced on January 19 in Andaman and Nicobar islands, and was to be concluded on March 10.

However, the Jaish-e-Mohammed-sponsored Pulwama attack on February 14 led to the rapid redeployment of ships, submarines and aircraft for operations in North Arabian sea, Capt Sharma said.

"The overwhelming superiority of Indian Navy in all three dimensions -- on surface, under-sea and in air -- forced the Pakistan Navy to remain deployed close to the Makran coast and not venture out in the open ocean," he said.

Navy Chief Admiral Sunil Lanba will assess outcome of the TROPEX in the Kochi naval base on Monday.

The day-long review by Admiral Lanba with all operational commanders is intended to examine the conduct of the exercise and to assess the operational preparedness of the Indian Navy, said the Navy spokesperson.

Exercise Tropex was followed by the largest coastal defence drill -- SEA VIGIL' on January 22 and 23 with participation of 13 coastal states and union territories along with all maritime stakeholders.