Over 50 per cent polling was recorded in the third phase of the District Development Council (DDC) elections in Jammu and Kashmir on Friday, with Kulgam district in militancy-infested south Kashmir recording the highest voting percentage of 64.45 in the Valley, officials said. Reasi district of Jammu region recorded 75.20 per cent voting, the highest in the union territory, State Election Commissioner (SEC) K K Sharma said, adding that 50.53 per cent voter turnout was recorded in the third phase of the maiden DDC polls in J-K.

The SEC said a large number of people came out to cast their votes in this phase.

Sharma further said Jammu division recorded an average voter turnout of 68.88 per cent, with Reasi district recording the highest percentage of 75.20 followed by Rajouri district with 72.81 per cent.

The lowest turnout in Jammu division was in Doda district, which recorded 59.51 per cent voting, he added. IMAGE: A woman shows her inked finger after casting her vote in the third phase of the J-K's DDC polls. Photograph: Umar ganie/Rediff.com

The SEC said Kashmir division recorded an average turnout of 31.61 per cent with Kulgam district having recorded the highest polling, followed by Bandipora district with 56.73 per cent and Budgam with 50.18 per cent.

He said while the third phase of the DDC polls recorded 50.53 per cent polling, the second and the first phases recorded 49 and 52 per cent respectively. IMAGE: People stand in queue to cast their vote in the DDC polls. Photograph: Umar Ganie/Rediff.com

Pulwama district of south Kashmir recorded the lowest polling at 10.87 per cent, he said.

Long queues were seen right from the morning despite severe cold conditions in Kashmir division and the hilly areas of Jammu division.

It was largely peaceful in the 33 constituencies in which polling was held in this phase. Sixteen were in Kashmir division and 17 in Jammu division, the SEC said.

Further, he said counting of votes for sarpanch and panch constituencies which went to poll in the third phase was being conducted immediately after the close of polling.

Similarly, in panch by-elections, there are 1,738 constituencies, and out of them, 798 have been elected unopposed.

Polling will take place in 327 constituencies, and there are 749 candidates are in the fray. 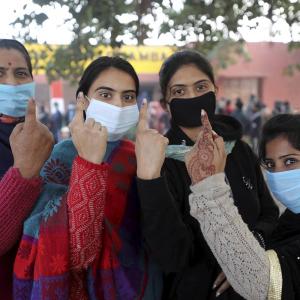