The Shiv Sena on Wednesday dubbed the Delhi Police's crackdown on students of the Jamia Millia Islamia as "illegal and inhuman", and wondered if in such a scenario the Bharatiya Janata Party has the right to raise its voice against the anti-Sikh riots. 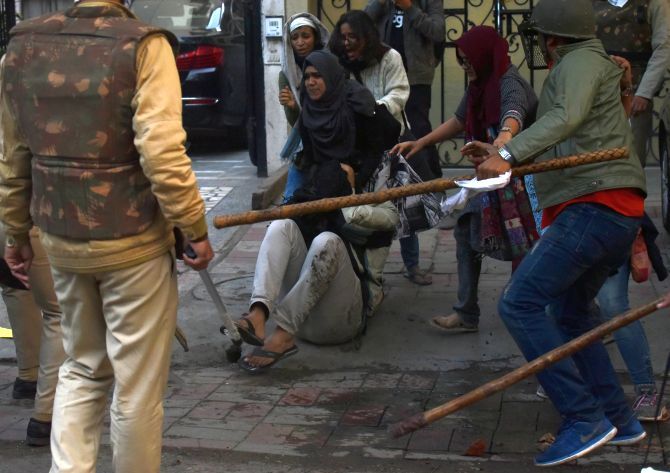 An editorial in Sena mouthpiece Saamana said when the situation comes to a point where "you have to fire gun shots on students of our own country," it should be understood that things have gone "out of control".

It also criticised Prime Minister Narendra Modi for blaming Pakistan for protests against the Citizenship (Amendment) Act in India.

The Delhi-based university virtually turned into a battlefield on Sunday when police entered the campus and used force, after protests against the amended citizenship law.

"The police action against the protesting students in Delhi was inhuman and illegal. The Britishers didn't do anything different at the Jallianwala Bagh," an editorial in Saamana said on Wednesday.

Does the BJP have a moral right to speak on the 1984 anti-Sikh riots? it asked.

The BJP, which is shedding "crocodile tears" over the demand of Bharat Ratna, the country's highest civilian honour, for Hindutva icon and freedom fighter V D Savarkar, should first explain why there is unrest in the country over the amended Citizenship Act, the Sena said.

Mocking the BJP over its demand for implementation of the new citizenship law in Maharashtra, the Sena said this is nothing but "mental stress" of losing power in the state.

"There are more important issues being faced by people and we are committed to resolving them," the Sena said.

"On one hand, you say Pakistan has been taught a lesson through surgical strikes and on the other, you blame the neighbouring country for the unrest here," the Sena said.

The Thackeray-led party asked why the BJP has not bestowed the Bharat Ratna on Savarkar despite it being in power at the Centre for last five-and-a-half years.

"Instead of shedding crocodile tears over Savarkar, the BJP should explain why there is unrest in the country over the amended citizenship law. The Shiv Sena is worried more about 11 crore citizens of Maharashtra than the CAA," it said.