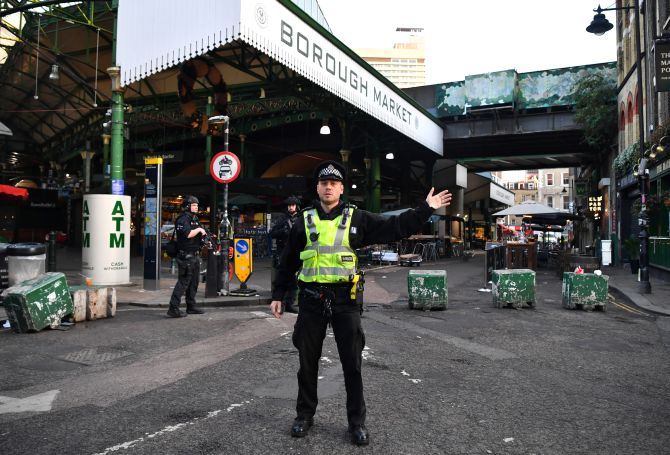 The Islamic State has claimed responsibility for the London Bridge terror attack in which two people were killed, saying the United Kingdom-born attacker, who wanted to set up a terrorist training camp in the garb of a madrassa in his ancestral region of Pakistan-occupied Kashmir, was one of its fighters.

The group claimed the responsibility for Usman Khan's knife rampage on the streets of London on Friday, which killed two and injured three people, via its Amaq news agency in a post on Saturday that was published on the TamTam and Telegram app.

'The person who carried out the London attack... was a fighter from the Islamic State, and did so in response to calls to target citizens of coalition countries,' the ISIS statement read.

The news emerged as former schoolmates of the 28-year-old terrorist, who was shot dead by armed police officers, revealed he had been seen preaching under the ISIS flag as a young teenager after he dropped out of school in Stoke-on-Trent in central England -- where his family settled many years ago after moving from Pakistan-occupied Kashmir (PoK).

"It is vital that the empty ideology of terror is rejected by all of us and that communities come together side-by-side to ensure that those seeking to divide us will never succeed," said Scotland Yard's Head of Counter Terrorism Policing, Assistant Commissioner Neil Basu.

"As a precaution, we have enhanced police patrols across London of both armed and unarmed officers. The public can expect to see an increased police presence throughout the weekend as colleagues from the Metropolitan, City of London and British Transport police carry out those patrols," he said.

The profile pieced together of Khan on the basis of his conviction on terrorism offences reveals a 'serious jihadi' who was the youngest in a nine-member group of Islamist radicals jailed in 2012 for planning to bomb the London Stock Exchange (LSE) and the United States Embassy as well as target VIPs such as Boris Johnson, then the Mayor of London.

The court documents seen by The Sunday Times reveal that the authorities were much more concerned about the sophistication displayed by Khan and others from his hometown of Stoke-on-Trent, who were planning to set up a terrorist training facility 'under the cover of a madrassa' on land owned by his family in PoK.

When he sentenced Khan in 2012, Justice Alan Wilkie had said that the future London Bridge attacker was on a 'more long-term and sustained path' and would try to recruit and train 'more serious and effective terrorists' to wreak mayhem.

"In my judgment, these offenders would remain, even after a lengthy term of imprisonment, of such a significant risk that the public could not be adequately protected by their being managed on licence in the community," he said,

Justice Wilkie said that 'the risk they pose is so significant that it can only be adequately met by an indeterminate sentence'.

However, the 'indeterminate sentence' was scaled down on appeal at the Court of Appeal in 2013, making Khan eligible for early release under licence conditions after eight years -- a term which completed in December 2018.

The attack has sparked an urgent review of the licence conditions of people jailed for terror offences in UK jails by the Ministry of Justice.

British Prime Minister Boris Johnson has said that scrapping early release for such dangerous prisoners would have prevented the London Bridge attack.

"I absolutely deplore that fact that this man was out on the streets... and we are going to take action against it," he said.

Details from his time in prison reveal that Khan was plotting his release from the moment he was sentenced in 2012.

'I would like to do such a course so I can prove to the authorities, my family and soicity (sic) in general that I don't carry the views I had before my arrest and also I can prove that at the time I was immature, and now I am much more mature and want to live my life as a good Muslim and also a good citizen of Britain,' he wrote from his high-security Belmarsh prison in 2012.

Once he left prison, Khan joined Learning Together, a programme run by Cambridge University's Institute of Criminology that seeks to rehabilitate prisoners with workshops on story telling.

According to the media reports, Cambridge University was even considering offering Khan a place as an undergraduate in the wake of his apparent keenness to reform and reject radicalism.

Khan, who was still under monitoring via an electronic tag since his release from a high-security prison last December, had reportedly gained special permission from probation officials to attend a Leaning Together event at Fishmongers' Hall in London Bridge on Friday.

It later emerged he attended wearing a hoax explosive device strapped to his chest and stabbed several people inside the building before being chased out by members of the public armed with fire extinguishers and a ceremonial tusk.

"The actions of the police and the public are all the more remarkable as we now know that the attacker was wearing what looked like a very convincing explosive device. Thankfully, we now know it be a hoax device," said Basu, the UK's senior-most counter-terrorism officer.

He said his officers continue to investigate and thanked the public for sending in nearly 500 images and videos as he renewed his appeal for any further information on Friday's attack.