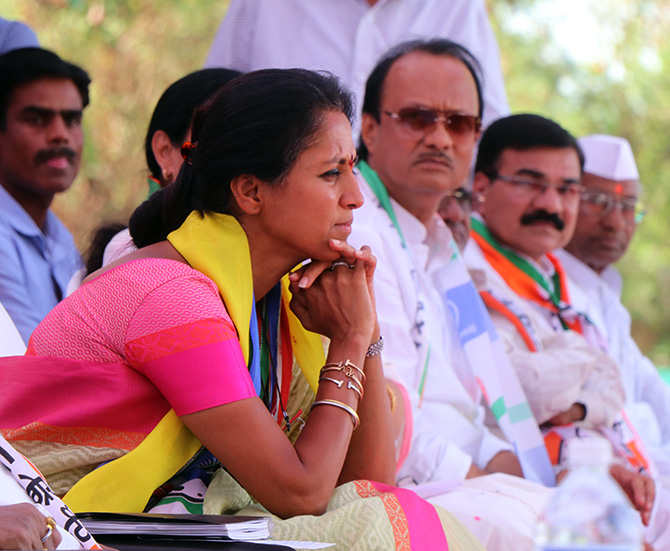 Nationalist Congress Party MP Supriya Sule on Tuesday said she was humbled by Prime Minister Narendra Modi's suggestion that she should be part of the Union Cabinet and it shows his 'magnanimity', but she asserted that it cannot happen.

"I was not in the conversation (between NCP president Sharad Pawar and Modi). I thank the prime minister from the bottom of my heart to show such faith and confidence in me.

"I am totally humbled by what he has said. But Mr Pawar has categorically, very humbly told the prime minister that it is not possible," Sule told PTI.

She further said that the prime minister's suggestion to make her a Union minister shows his 'magnanimity'. But this could not happen, Sule said.

Her remarks came after NCP president Sharad Pawar, in an interview to ABP-Majha, dismissed reports that the Modi government offered to make him India's President.

"But there was an offer to make Supriya (Sule) a minister in the Modi-led cabinet," Pawar said.

Pawar had met the prime minister last month amid parleys between the NCP, Congress and Shiv Sena.

When asked about the role in the new Maharashtra government of Ajit Pawar, who had joined hands with the BJP in defiance of his party, she said he is the senior leader of the NCP.

Ajit was sworn is as Deputy Chief Minister of Maharashtra on November 23. After hectic parleys, he quit and joined back the party fold.

"He (Ajit) is the leader of our party, my elder brother and he will be always be my senior colleague in the party," Sule said.

Sule, who has been representing Baramati, the family bastion of the Pawars, said the Shiv Sena-NCP-Congress combine led by Uddhav Thackeray will work to make Maharashtra a number one state in the country.

She exuded confidence that the Maharashtra government will last its full five-year term.

Meanwhile, in an interview to NDTV, NCP President Sharad Pawar said he conveyed to the PM that it would not be possible for his party to work with the Bharatiya Janata Party.

Sharad Pawar also said that in the last five years, some BJP leaders on many occasions suggested that Sule is a competent person and should join the process of decision making and associate with the government.

"The prime minister said she is doing a good job in the Parliament," Pawar said. Modi wanted us to work together, I rejected: Pawar