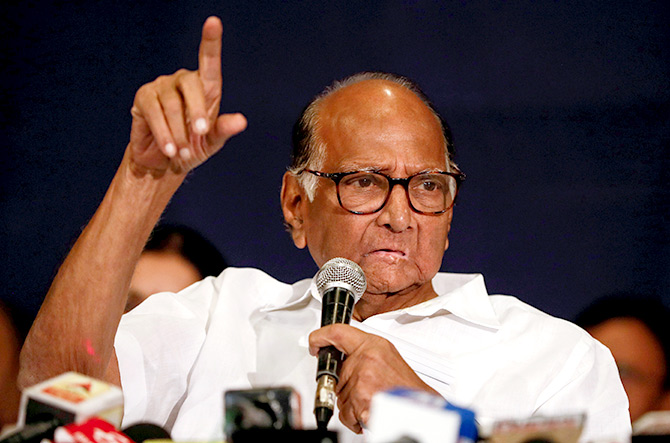 In second big disclosure in two days, Nationalist Congress Party chief Sharad Pawar on Tuesday said he was aware that party leader Ajit Pawar was in touch with Devendra Fadnavis even as he distanced himself from his nephew's sudden political move to join hands with the Bharatiya Janata Party on November 23.

Pawar had on Monday said that Prime Minister Narendra Modi had proposed 'working together' but he rejected the offer.

Fadnavis and Ajit Pawar took oath on November 23 morning as chief minister and deputy chief minister, respectively, even though the Shiv Sena, NCP and Congress had almost finalised their alliance and named Uddhav Thackeray as the chief ministerial candidate.

However, Ajit resigned on November 26, following which Fadnavis also threw in the towel, resulting into collapse of the government that lasted for only 80 hours.

"I knew Devendra Fadnavis and Ajit Pawar were in talks, but the speculation that I was aware of Ajit's political move is wrong," Pawar told NDTV in an interview.

Pawar, however, appeared softening his stand vis-a-vis Ajit, saying the latter was unhappy over pace of discussions with Congress leaders for government formation and the 'tussle' for sharing power.

The former Union minister also said that he had never thought of aligning with the Sena, which wears Hindutva on sleeve.

"We knew that serious differences cropped between the two pre-poll alliance partners (Shiv Sena and BJP after the Maharashtra poll results on October 24) and an understanding was not honoured. Sena was unhappy and we were watching the developments," he said.

Pawar, however, didn't clarify on which 'understanding' he was referring to.

Sena president Uddhav Thackeray had accused Fadnavis and BJP of not honouring the 'promise' made to his party on sharing the chief minister's post in new government.

"There were no talks with the Sena before elections. We were fighting against the Sena and the BJP. There was no question of associating with them," Pawar said.

Pawar said he didn't expect Ajit to act like the way he did.

"But there is a background to this development. There was a heated discussion between myself and Congress leaders from Delhi at the Nehru Centre on certain issues. For a moment, I thought I would not associate with this discussion and that I should not be involved in talks. Ajit was unhappy too and spoke to my colleagues on how we are going to work...There was a tussle over power sharing," he said.

On Ajit's likely induction into Uddhav Thackeray-led Maharashtra Vikas Aghadi (MVA) government, Pawar said the NCP would take a call after conclusion of upcoming winter session of the state legislature.

To a query, he said, 'the MVA government will last for the entire five years. There is no tussle over portfolios', he added.

Pawar said the state government will run as per the Common Minimum Programme (CMP) and not on any ideology.

Pawar also asserted that an alliance with the Shiv Sena was 'not difficult', compared to a tie-up with the BJP.

Speaking about his talks with Prime Minister Narendra Modi, the NCP chief told NDTV that he conveyed to the PM that it would not be possible for his party to work with the BJP. 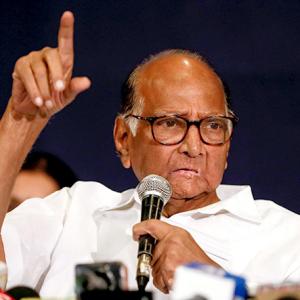