'Was it right': PM to anti-CAA protesters over violence

Prime Minister Narendra Modi on Wednesday slammed those who damaged public property during protests in Uttar Pradesh against the amended citizenship law, saying they should ask themselves whether what they did was right. 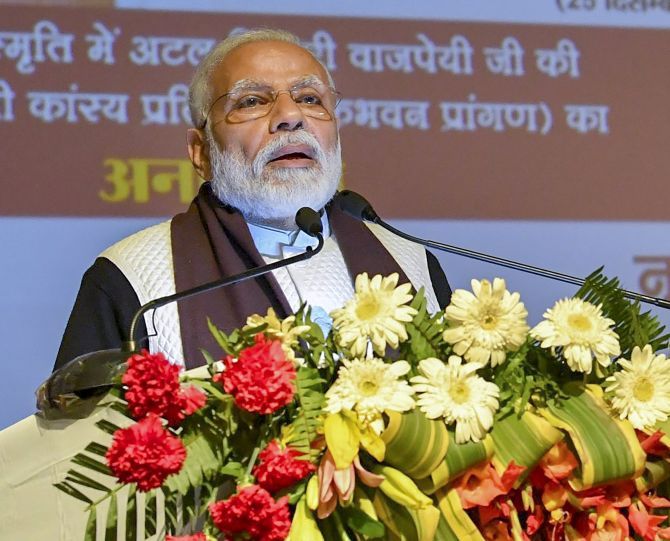 Modi was addressing a gathering after unveiling a statue of Atal Bihari Vajpayee at the Lok Bhavan in Lucknow on the former prime minister's birth anniversary, which is also observed as Good Governance Day.

He also laid the foundation stone for the Atal Bihari Vajpayee Medical University in the Uttar Pradesh capital.

"They (the vandals) should ask themselves was it right. Was their thinking right? Whatever has been burnt or destroyed would it not have been useful for their children?

"Think about those who died in the violence, the common citizens and policemen who suffered injuries in the violence. What goes through the mind of their family members," Modi asked.

He said he wanted to tell those who damaged public property "not to forget that rights and duties are both important and go hand in hand".

Over 15 people were killed, 263 police personnel injured and state-owned property damaged in violence during protests against the Citizenship (Amendment) Act in Uttar Pradesh.

Modi said that "after Independence, we have always stressed on rights. But, now when we are moving towards 75 years of freedom, it is the demand of the hour that we should pay equal stress to our duties".

"I am saying this because in Uttar Pradesh the way in which some people indulged in violence in the name of protests, damaged government property, they should ask themselves was their path correct," he said.

"Better roads, better transport systems, good quality sewer lines are the rights of citizens. Then to keep them safe and clean is the duty of citizens," the prime minister said.

Modi said "rights have a limit, but responsibility and sense of duty are vast". "In addition to rights, let us give as much importance to our duties as citizens," he said.

The Uttar Pradesh government is making efforts to fulfil its duty in this regard, Modi said, praising it for taking steps to eradicate encephalitis. The government instead of becoming a roadblock, should become a medium for solutions, he said.

Modi said "at a time, when we are about to step into the New Year, a new decade, we should remember Atalji's two very simple benchmarks to assess how a government could contribute towards national progress".

"He (Vajpayee) used to say that every generation's contribution to India's development should be evaluated using two parameters. The first is how many problems which we have inherited have been solved by us. The second is for the development of the nation, what foundation have we laid through our own initiatives," he said.

Modi said in the light of these benchmarks, "we can say that India is entering 2020 with unprecedented success". Whatever economic, social or political problems and challenges that were inherited, "we are making continuous efforts to resolve them",he said.

"Article 370. How old was the disease? How difficult it used to look? We had inherited it. But, it was our responsibility to make efforts to resolve such challenges. And it happened. It happened with ease," Modi said, adding that the Ram Janmabhoomi issue was also resolved peacefully.

On the Citizenship (Amendment) Act, he said giving citizenship to those who came to India from Pakistan, Bangladesh and Afghanistan to "save the dignity of their daughters", was another problem whose solution was found by 130 crore Indians.

"Since India's Independence and partition, lakhs of poor, mostly Dalits, the oppressed and the deprived in Pakistan, Bangladesh and Afghanistan in order to save their religion and honour of their daughters were forced to seek shelter in India. Paving the way for their citizenship, solutions to many such problems, have been found by 130 crore Indians," he said.

Modi said that "an India, which is full of confidence is entering 2020, stepping into a new decade". Even now, whatever is left to be solved, whether it be housing for the poor or making water available, every Indian is making efforts to resolve them, he said.

"It is in our nature to challenge every challenge," the prime minister asserted.

He also highlighted the schemes of his government towards this direction.

On the medical university, Modi said it will provide affiliation to government, semi-government and private colleges, and help in improving the quality of medical education in Uttar Pradesh.

He also said the magnificent statue of Vajpayee will inspire people working at the Lok Bhavan, the building from where the state government works, to deliver good governance and public service.

"Good governance is also not possible until we think of the problems in totality," Modi said.