A delegation of Punjab Bharatiya Janata Party leaders met Governor Banwarilal Purohit in Chandigarh on Thursday and demanded the dismissal of the state's home minister and police chief over the security breach during the prime minister's visit to Punjab. The BJP delegation demanded the ouster of the two, accusing the government of plotting the conspiracy to hold up the PM's convoy in Ferozepur in collusion with police and expressing a lack of confidence in the likely outcome of the probe into the matter by a high-level committee.

"We reject this committee. The chief minister is the conspirator of this conspiracy. What will this committee set up by his government do?" Punjab BJP president Ashwani Sharma told reporters in a press conference after leading the party delegation to Governor Purohit.

The Punjab government has set up a two-member committee for a "thorough probe" into lapses during the PM's Wednesday trip to Punjab.

Demanding the ouster of state Home Minister Sukhjinder Singh Randhawa and DGP Siddharth Chattopadhyaya, Sharma said, it was DGP Chattopadhyaya and Chief Secretary Anirudh Tewari who gave clearance to the PM's convoy to take the road after the weather turned inclement in Bathinda where the PM had landed.

Addressing the press conference, Sharma termed the Wednesday incident worse than those during the 1980s militancy in the state and alleged that the state police was instructed not to allow party workers from reaching the rally site.

The state government deliberately prevented the Prime Minister from inaugurating the developmental projects worth thousands of crores, as it feared the BJP will gain public support, he alleged.

"Yesterday's incident was worse than those during terrorism days in Punjab. Even during those days, political leaders and parties could address rallies and programmes,” Sharma said.

“The Congress is a danger for Punjab. They have stooped to this level. They played with fire during the Emergency and now they are doing the same," Sharma asserted.

"The Congress, which earlier pushed the state into dark days of militancy, should stop doing conspiracy to burn Punjab again to grind their political axe," he said.

They want to run Punjab in an autocratic manner, he further alleged, adding if Chief Minister Charanjit Singh Channi "has any morality left, he should resign immediately".

Junking the Congress claims that not many people had turned up for the BJP's Ferozepur rally, Sharma alleged that the state police was instructed not to allow party workers from reaching the rally site.

"Congress leaders say that chairs were empty at Ferozepur rally, but thousands of our workers reached the venue despite obstacles. You should question the government why were our buses stopped at several places?" asked Sharma.

The PM's convoy was held up on a flyover in Ferozepur, around 30 km from its destination, National Martyrs Museum in Hussainiwala, due to a blockade by protesters on Wednesday.

He returned from poll-bound Punjab without attending any event or a rally.

The Union Ministry of Home Affairs, in a statement on Wednesday, had said the PM was earlier scheduled to go Hussainiwala from Bathinda in a helicopter.

Sharma said the lapses show how the Punjab government was "non-serious" about the PM's security.

"The entire incident smacks of conspiracy and it appears everything was pre-planned," he alleged.

"Besides, there are other questions like who leaked the information that the Prime Minister's cavalcade was to pass through the route," he said.

"This means this government through police department hatched the conspiracy to bring the Prime Minister's cavalcade to a halt and this needs to be probed," Sharma alleged.

Asked if the state BJP has demanded Governor's rule in the state, he said people have already rejected the Congress government and they will be shown the door in the forthcoming polls.

Sharma alleged a large number of buses and other vehicles carrying BJP workers were prevented from reaching the rally site.

At the press conference, BJP leaders played out videos claiming that hundreds of buses carrying party workers were prevented from reaching Ferozepur and these were stopped at various places including those in Amritsar, Moga, Ludhiana, Sangrur, Gurdaspur and Ferozepur districts.

Sharma said small groups of people were "made to sit and protest" at some places and they had the "government's backing".

Sharma alleged that at some places police vehicles were parked in the middle of the road to hamper the movement of the buses carrying workers.

On Modi's cavalcade getting stuck on a flyover for 15-20 minutes due to a blockade by some protesters, Sharma said Chief Minister Channi has double standards.

On the one hand, the Channi government makes lathi-charge on protesting employees and teachers but the CM says he could not have used force to remove those blocking the road on which Prime Minister was travelling, said Sharma.

"As a political party, doesn't BJP have the right to hold rallies?” he asked adding: “Democracy is in danger today in Punjab."

Sharma said in Dina Nagar, even food items of workers headed for the Ferozepur rally were snatched by some miscreants.

On the Ferozepur- Jalalabad road, a police vehicle blocked the road, hampering the movement of buses of BJP workers. Same scenes were witnessed on many other routes, he alleged that at some places, BJP workers were also beaten up.

On the Amritsar-Tarn Taran road, hundreds of buses were stranded, he further said.

"Buses coming from Pathankot, Gurdaspur were stopped by erecting police barricades on Kathunangal road. In Ludhiana too, buses were stopped. They had deployed entire police to stop the BJP workers from reaching the venue," he alleged.

The Union Home Ministry has sought an immediate explanation from the state government on the PM's security breach, saying it did not ensure the requisite deployment.

Home Minister Amit Shah too has warned that such dereliction of the security procedure during the prime minister's visit is totally unacceptable and the accountability will be fixed.

Chief Minister Channi has denied any security lapse or political motive behind it and said his government is ready for an inquiry. 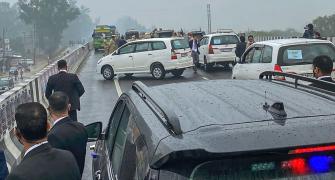 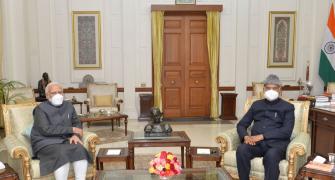 SC to hear plea on PM's security breach on Friday