Prime Minister Narendra Modi on Sunday rechristened Kolkata Port Trust after Jan Sangh founder Syama Prasad Mookerjee, drawing criticism from the opposition camp, which said he was more of a 'name-changer' than a 'game-changer'. 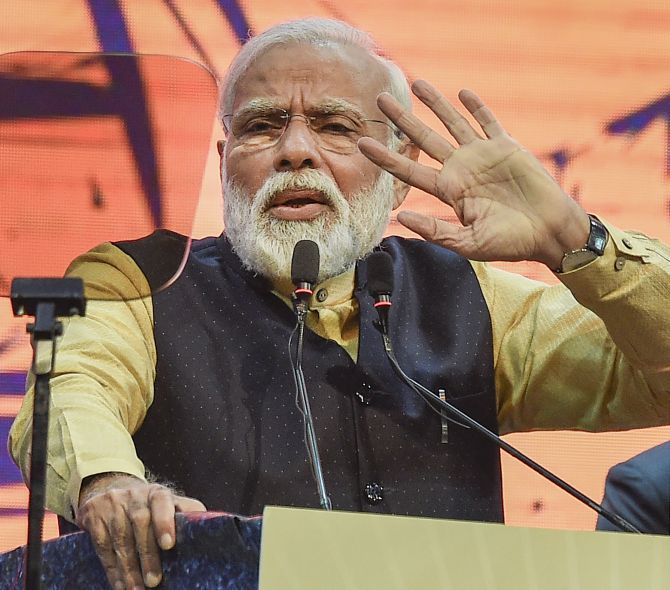 Modi, while addressing the 150th anniversary programme of Kolkata Port Trust, invoked Mookerjee and B R Ambedkar and said their contributions had led to the development of the country post Independence, but suggestions made by them were not implemented after they resigned from the government.

"I announce that the Kolkata Port Trust will now be known as Dr Syama Prasad Mookerjee Port. He was the father of industrialisation in India, a man who made sacrifices for one nation and one Constitution," Modi said, while addressing the ceremony at Netaji Indoor Stadium in Kolkata.

Hinting at a change of guard in 2021 assembly polls, he said the West Bengal government was not implementing central schemes as it did not help 'syndicates' (cartels), but people in this state would not have to miss out on the benefits for long.

West Bengal Chief Minister Mamata Banerjee, who was scheduled to attend the port trust programme, was conspicuous by her absence. None of the Trinamool Congress ministers were also present at the event.

"When there is no syndicate or cut money involved, why would someone implement central government schemes? I don't know whether they (state government) would give approval for central schemes such as Ayushman Bharat Yojana, PM Kisan Samman Nidhi, but if they do, people of Bengal will be able to enjoy their benefits," he said.

The prime minister also claimed that he was pained to see that the poor in the state was not getting the benefits of the Centre's welfare schemes. "Eight crore farmers across the country are getting benefited (due to the central schemes). But there will always be pain in my heart (about the schemes not being implemented in Bengal). I will always pray to god for the welfare of farmers and poor patients. May god give them (Bengal government) good sense...

"However, I have a feeling that the people of West Bengal will not remain deprived of central schemes for long," he insisted.

Modi, who released a commemorative stamp on the occasion, said his government at the Centre was making every possible effort to develop Bengal, its poor, underprivileged and exploited sections.

He also inaugurated and laid foundation of infrastructure projects for the expansion and modernisation of the Kolkata Port. "Development of waterways has improved Kolkata Port Trust's connectivity with industrial centres in east India, made trade easier for our neighbouring countries, Bhutan, Myanmar and Nepal.

"Our country's coasts are gateways to development, the (central) government has started the Sagarmala programme to improve connectivity," Modi added.

Criticising the prime minister's move to rename the port, Communist Party of India-Marxist politburo member Mohammed Salim said Modi had turned into a 'name-changer' rather than being a 'game- changer', contrary to what the saffron camp had claimed when it came to power in 2014.

"When Narendra Modi came to power, we thought his government will be a game-changer. Now we see that the government is more of a name-changer. This name-changing, however, will not have any material impact on the port's performance," Salim said.