Launching a fresh tirade against Prime Minister Narendra Modi, West Bengal Chief Minister Mamata Banerjee on Sunday said he was "peddling lies to mislead the voters" in the poll-bound state. 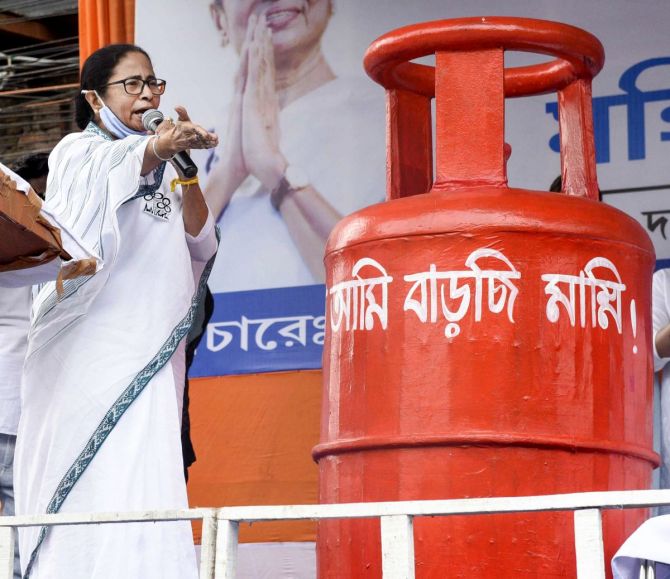 IMAGE:West Bengal Chief Minister Mamata Banerjee speaks during a protest rally against the hike in fuel and LPG prices, in Siliguri. Photograph:PTI Photo

Banerjee, addressing a rally in Siliguri following her protest march over LPG price hike, said the prime minister made many "empty" promises over the years, and people no longer trust him.

She sought to know "why the PM has not yet deposited Rs 15 lakh in the bank accounts of every citizen, as promised by him before 2014 Lok Sabha polls".

"You have made many empty promises. People will not accept your falsehood every day. We demand you make LPG cylinder affordable to every citizen of the country. You have made LPG cylinders inaccessible for the common man," Banerjee said in her address.

The CM also said that Modi should be "ashamed of his habit of telling lies".

"He gives speech in Bangla, but the script in always written in Gujarati, and kept under a transparent sheet of glass before him. He just pretends that he knows Bangla well," she said.

"Your party had vandalised Vidyasagar's bust. Your party dishonoured Birsa Munda. Your party wrongly said Rabindranath Tagore was born in Santiniketan. This shows your depth of knowledge about Bengal and its culture," she said.

Asking people to raise their voice against the "riot-mongering Bharatiya Janata Party," Banerjee said, "People of Bengal, who had been living in peace casting aside barriers of community and language, would come under grave threat if a divisive force such as the saffron party comes to power in the state."

Earlier in the day, the PM, during his mega rally in Kolkata, accused Banerjee of "betraying and insulting" the people of the state who trusted that she will bring about a change after the Left rule.

"Bengal chose you in role of 'Didi' (elder sister) but you preferred being 'bua' (aunt) to your 'bhatija' (nephew Abhishek Banerjee)," he said. 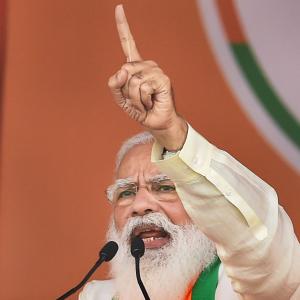