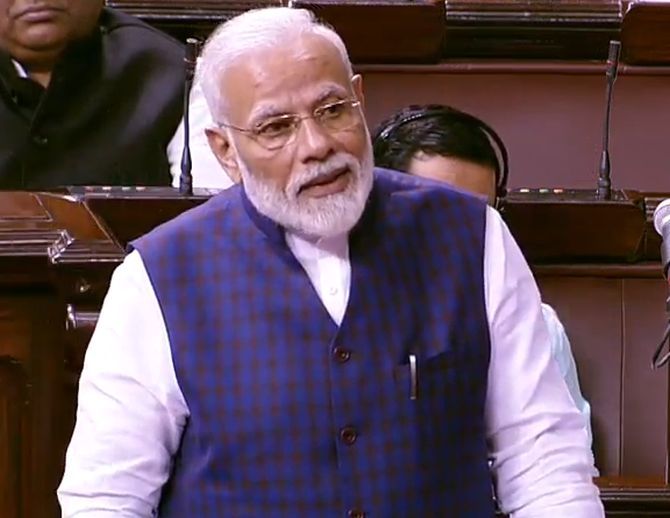 With disruptions in Rajya Sabha in the past hindering passage of crucial legislations, Prime Minister Narendra Modi on Monday said the Upper House of Parliament was essential for checks and balance in democracy but a distinction needs to be drawn between checking and clogging.

Speaking on the occasion of the landmark 250th session of Rajya Sabha, he lauded Sharad Pawar's Nationalist Congress Party and the Biju Janata Dal for never rushing to the well of the House to raise their issues and yet raising their points effectively.

"The Rajya Sabha is about checks and balances. This is absolutely essential for our democracy. Debates have to be many and effective. But, there is also a difference between checking and clogging (and between) balance and blocking," he said.

With some within the ruling party questioning the effectiveness of Rajya Sabha as crucial legislative work got stalled because National Democratic Alliance lacked majority in the House, Modi recalled the then Prime Minister Atal Bihari Vajpayee's words that the Upper House 'may be the second house but no one
should think of it as a secondary house'.

"Today, I echo the sentiments of Atal Ji and add that the Rajya Sabha must be a vibrant supportive House for national progress," he said, adding makers of the Constitution envisioned a bicameral legislative framework and this vision has enriched the democracy.

He, however, wanted the House to function and not disrupt work.

"Today I want to appreciate two parties -- NCP and BJD. These parties have wonderfully adhered to Parliamentary norms. They have never ventured into the well. Yet, they have made their points very effectively. Much can be learnt from these practices," he said.

"Our Constitution inspires us to work for a Welfare State. It also motivates us to work for the welfare of states. The Rajya Sabha, as the Council of States, enables us to further the spirit of cooperative federalism," he said.

Recalling the work done by Rajya Sabha, Modi said none can forget the role of the House when Bills pertaining to Articles 370 and 35(A) were passed.

"This House has worked to further unity."

"Whenever it has been about national good, the Rajya Sabha has risen to the occasion and made a strong contribution. It was believed that the Bill on Triple Talaq would not pass here but it did. Even GST became a reality after it was passed in the Rajya Sabha," he said.

The prime minister said the Rajya Sabha gives an opportunity to those away from electoral politics to contribute to the nation and its development.

"Who can forget that it was through the Rajya Sabha that a stalwart like Dr Babasaheb Ambedkar could contribute even more to national progress," he said, adding Ambedkar was never allowed to be elected to the Lok Sabha.

He said two things about the Rajya Sabha stand out -- its permanent nature and it being representative of India's diversity.

"I can say that it is eternal... This House gives importance to India's federal structure," he said.

Source: PTI© Copyright 2021 PTI. All rights reserved. Republication or redistribution of PTI content, including by framing or similar means, is expressly prohibited without the prior written consent.
Related News: Rajya Sabha, Upper House of the Parliament, Narendra Modi, India
SHARE THIS STORY
Print this article 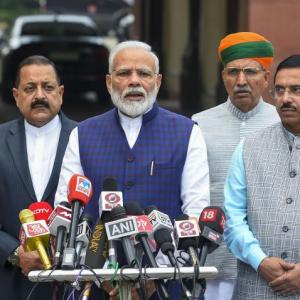