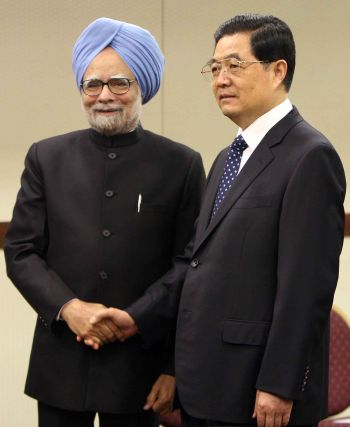 Singh met Hu in Brasilia on the sidelines of the India-Brazil-South Africa and Brazil-Russia-India-China Summits and the two leaders are understood to have discussed ways to further cooperation in issues of global interest.

Welcoming Singh, Hu shook hands with him and posed for photographs.

The Chinese president said he will warmly welcome his Indian counterpart Pratibha Patil when she visits Beijing next month. Singh also conveyed India's grief over the death of 617 people in the devastating earthquake in China on Wednesday.

"People of India have learnt with great sorrow the destruction caused by the earth quake which has led to loss of lives of Chinese citizens. On behalf of the people of India, I convey deep condolences," he said.

"Well we have the border problem and that problem has to be resolved. We are working very hard to find to have a practical, pragmatic solution to that problem," he said.

On the overall Sino-India relations, he had said the economic content of the relationship has increased significantly, with China today being India's largest trading partner.