PM hunts for chiefs of IB, RAW and CBI

Prime Minister Manmohan Singh is all set to have a new team of advisors in intelligence organisations.

With an idea of sprucing up of the 125-year-old Intelligence Bureau and the 46-year-old Reasearch and Analysis Wing, Dr Singh has begun consultations to identify new heads of IB, RAW and the Central Bureau of Investigation by January.

Dr Singh also has to fill up another two top sensitive posts in the next four months. An immediate urgency is to find successors to Chief Information  Commissioner Habibullah Wajahat and Prasad Rao, head of the National Technical Research Organisation, which handles cyber terrorism, as they retire this month end.

The prime minister has to also look for successor to Cabinet Secretary K M Chandrasekhar, 62, who was given a fourth extension until next June in view of the Commonwealth Games he is overseeing and also explore the possibility of taking a younger face in place of his Principal Secretary T K A Nair, a Punjab cadre IAS officer who was pulled out of retirement to serve him since 2004.

Dr Singh is moving cautiously in making the new appointments to avoid the kind of criticism he faced in selection of the Central Vigilance Commissioner earlier this month as Lok Sabha Opposition leader Sushma Swaraj, a member of the selection committee, made an issue over appointing Telecom Secretary P J Thomas to the post.

Insiders say Dr Singh has quietly consulted three governors who were at the helm of affairs in government until recently as he wanted their inputs on who can be the best candidates for the top posts.

CIC selection tricky: Wajahat, the first CIC under the Right to Information Act, had resigned last August to be the first CIC of his home state of Jammu and Kashmir, but his resignation was kept in abeyance. He, however, cannot be given any extension as the RTI Act fixed the upper age limit of 65 that he reaches on September 30.

The prime minister's worry is that Swaraj is also a member of the three-member selection committee that includes himself and the Law Minister Veerappa Moily and as such there will be fireworks if consensus is not found on the appointment of a new CIC.

Informal consultations have already begun but those pushing the files are under strict warning not to speak to the media.

Since the RTI Act gives immense powers to the CIC to put the government into difficulty, sources said the prime minister had a meeting with Sonia Gandhi to explain to her that she should not go by her NGO advisers to press for someone from the civil society and not a former bureaucrat to occupy the position.

Retired hand for NTRO? Both serving and retired Intelligence Bureau officials are in the race to head NTRO. Former IB Chief P C Haldar, who is now the government's interlocutor in talks with Assam's extremist outfit ULFA since after retirement in 2008, and N C Padhi, an operational spy man of IB who retired three years ago, are looking forward to be rehabilitated in this technology intelligence organisation.

Padhi could have become the IB chief but for then National Security Adviser M K Narayanan's objections. Narayanan has moved out to the Kolkata Raj Bhawan and hence Padhi hopes to get a chance, though insiders say Narayanan is among the governors the PM still consults while making appointments to sensitive positions.

If the government prefers to put NTRO under a serving police official with enough intelligence experience, there are three serious contenders. Topping the list is Sardar Nischal Sandhu, who is IB's special director, and competing with him is his colleague Ajit Lal. Sandhu, a 1973 batch IPS officer of the Bihar cadre, has vast experience of serving in IB and RAW and is known as an operations man with a grip on the ground realities in Jammu and Kashmir.

He would have been the first head of the National Investigation Agency but that was scuttled because it would have brought him in clash with IB Chief Rajiv Mathur as both have equal standing in the IPS cadre. R V Raju got the NIA post as he is two years junior to Mathur and thus does not destabilise the hierarchy balance.

Ajit Lal is junior to Sandhu so far as the cadre goes as he belongs to the 1974 batch of the Himachal cadre. He is due for retirement in September next year while Sandhu retires only in January 2012.

New IB chief: There is, however, speculation that the PM would prefer a retired hand to handle NTRO and in that eventuality Sandhu, who is No 2 in the IB, is all certain to be its new director in the new year as present incumbent Rajiv Mathur, a 1972 batch Bihar cadre IPS, retires in December.

In that eventuality, Ajit Lal would have retired at least four months before Sandhu's due retirement age, while Sandhu may continue in the agency with two years of extension like those in other key posts in the government. Even Mathur is reported to be trying for extension.

Cadre man for RAW? The Research and Analysis Wing Secretariat is always headed by the IPS officers but there is excitement among the RAW Allied Service officers that successor to their secretary K C Verma may come from their cadre for the first time. Verma is due for retirement in January.

Though the vacancy occurs only three months from now, lobbying has already begun to grab the post. Ranjit Mathur and his junior Sanjiv Tripathi, both belonging to the RAS cadre, are vying for the top post.

Sanjiv is son-in-law of Gauri Shankar Bajpai, who was RAW secretary in 1991-92.

The prime minister has been advised by the three governors, two of them former IB chiefs, to tread carefully in deciding the RAW boss as they point out how seven RAS cadre seniors had gone on a protest leave in when IPS officer Avadhesh Mathur (1975) was shifted from IB to RAW as its special director general. The protest was over an "outsider" and that too a junior being thrust upon them while at least three of them, P M Hablikar, Sharad Kumar and Chakru Sinha, were seniors as they belonged to 1973 batch of RAS.

CBI who? The post of the CBI chief will also be falling vacant around the same time as Ashwani Kumar hits the retirement age January end.

There are at least three contenders to occupy his chair from within the agency. They include Balwinder Singh, an Andhra cadre IPS who may lose the chance because of the charges of bias levelled on him recently by Gujarat IPS officer Geeta Johari embroiled in the Sohrabuddin killing probe. A P Singh, who is also with the CBI and belongs to Bihar cadre, is tipped to get the coveted post. 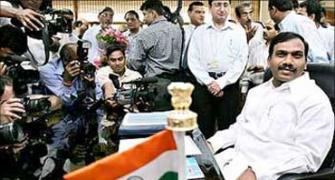