Daman Singh, the writer daughter of Prime Minister Manmohan Singh, is planning to write a bookabout her parents which will "explore the experiences that make them what they are".

"I see this (the book) as a way to try and understand them as individuals, not merely as my parents," says Daman, the second of Singh's three daughters. For Daman, whose second novel The Sacred Grove released last week, her father is her favourite politician."I admire his integrity the most," she told PTI in an interview.

Asked whether her father reads her books, she says, "We are three sisters, and all three of us have written books. My father has certainly read portions of them, but he does not have time to read them from cover to cover. I am quite sure he thinks our work is wonderful. Of course, he is biased."

Daman, in her mid-40s, says that as daughters and professionals, the three daughters often give suggestions to their parents. "But they are pretty independent too. So they usually ignore our advice," she maintains.

The sisters do not necessarily consult their parents for their writings. "They have always encouraged us to be independent, especially in our respective fields of work. So I don't think my sisters or I would consult them in our writing."

The prime minister's eldest daughter Upinder is the head of the history department at Delhi's St Stephen's College and the youngest Amrit is a lawyer in New York. The Sacred Grove is a story about growing up in troubled times. The story is told by Ashwin, a young boy, and explores the issue of religious prejudice. "As a parent, there was a time when I was consumed with anxiety. About my child, about the way I was bringing him up, and about the society in which he would have to survive on his own one day...What I needed to do was to step into his shoes, to see the world through his eyes. This is what I tried to do in The Sacred Grove," Daman, whose first novel was titled Nine by Nine says.

According to her, it is not at all easy to write novels."It takes me many months to work out the story in my head. Once I actually start writing, I am tempted to tell the story as quickly as possible. It takes a lot of discipline to slow myself down, and pay attention to characters, places, and details in the story," she says.

Zafri Mudasser Nofil in New Delhi
Source: PTI© Copyright 2021 PTI. All rights reserved. Republication or redistribution of PTI content, including by framing or similar means, is expressly prohibited without the prior written consent.
SHARE THIS STORY
Print this article 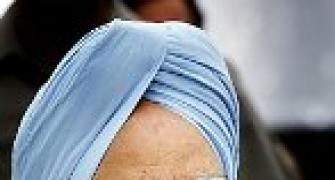