Ahead of the state assembly polls and amid talks of him taking the electoral plunge, Yuva Sena chief Aaditya Thackeray on Thursday launched his 'Jan Ashirwad' Yatra from Jalgaon and made a pitch for creation of a "new Maharashtra". 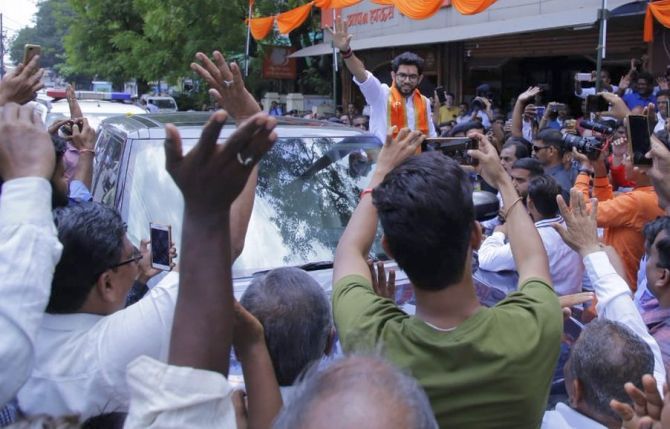 Addressing the inaugural rally of the yatra, a public outreach programme, Aaditya also asked the party's rank and file to gear up to win the hearts of the people and the state.

Aaditya, however, maintained the mass outreach initiative was not a campaign to seek votes eyeing the polls, due in September-October, but a "tirth yatra" (pilgrimage) for him.

Shiv Sena leader Sanjay Raut, who spoke to reporters separately before the launch of the yatra, lavished praise on Aaditya, dubbing him as the state's "promising leadership", and added that the Yuva Sena leader will be the chief minister in case the post goes the saffron party's way.

Shiv Sena is currently sharing power with the Bharatiya Janata Party at the Centre and also in Maharashtra. It will contest the assembly election in alliance with the Amit Shah-led party.

Aaditya would be the first in the Thackeray family if he contests the election.

"This yatra is not part of any campaigning to seek votes. I consider this as my tirth yatra... this yatra is to create a New Maharashtra," Aaditya told the gathering. 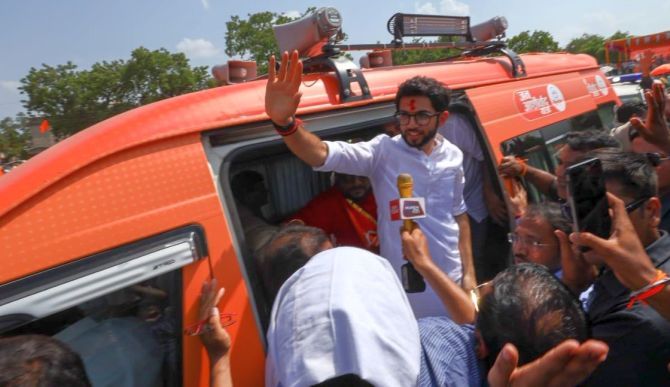 He said he wants to thank each person who voted for the Shiv Sena in the Lok Sabha polls held earlier this year.

The Yuva Sena leader said had Shiv Sena founder and his grandfather Bal Thackeray been alive, the latter would have also asked him to thank the people who voted for the party.

"Accordingly, I have undertaken this yatra without seeing any muhurat (auspicious time)," Aaditya said.

The Uddhav Thackeray-led party won 18 seats in the Parliamentary election.

"We should try to see each voter votes for the Shiv Sena. Only then will we be able to create a New Maharashtra," Aaditya said. 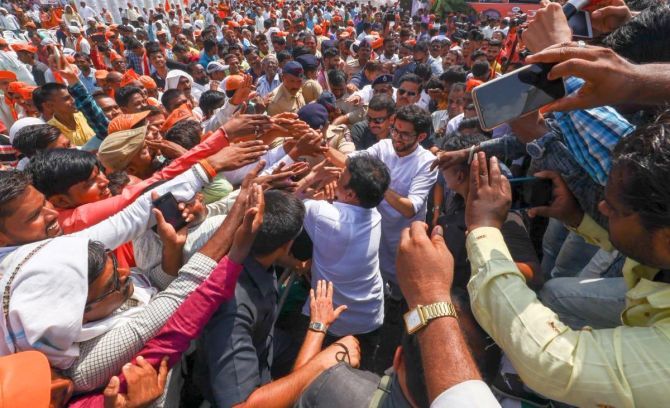 Meanwhile, Raut said Maharashtra required a new face to be led by and added that leadership was present in the form of Aaditya.

"I think the chief minister's post going to Shiv Sena means it is going to Aaditya Thackeray. He has those leadership qualities acceptable to Maharashtra," Raut said in response to a question.

During the yatra, Aaditya is scheduled to cover Dhule, Nashik and Ahmednagar districts, besides Jalgaon.

As per the schedule, he will hold a rally in Malegaon in Nashik district on July 19 and two rallies in Nashik city on July 20 and 21, before moving to Ahmednagar on the same day.

On the last day of his tour, Aaditya will hold three rallies in Ahmednagar, Shrirampur and Shirdi assembly constituencies respectively.

The Shiv Sena had won 63 seats in the 2014 state assembly polls.