'I don't think there will be many problems after the assembly election results.' 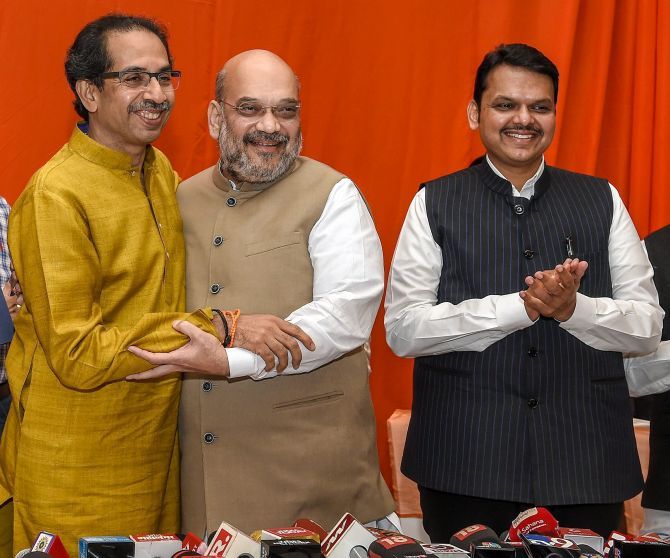 Buoyed by the success of the Shiv Sena-Bharatiya Janata Party alliance in the Lok Sabha election in Maharashtra, Sena MP Sanjay Raut tells Sunil Gatade that the forthcoming assembly elections are a "one-sided affair" as there is no Opposition party worth the name.

How do you look at the assembly polls this time as you are contesting the polls with the BJP, unlike in 2014, when you had fought bitterly with them?

We contested the Lok Sabha polls together and we scored even more than the last time.

It seems there is virtually a direction from the people that we contest together.

So both parties have now started meetings on seat sharing and related issues.

If you look at the voting in the Lok Sabha polls, it shows that the Sena and the BJP are ahead in 220 of the 288 assembly segments.

I am not saying we will win because we are ahead in 220 seats.

We have to work hard because the result of the Lok Sabha polls is different than that of assembly.

We saw it in Odisha that witnessed simultaneous polls.

There were two trends of voting.

The BJP being more favoured in the Lok Sabha and Naveen Patnaik's ruling Biju Janata Dal in the assembly.

This is not going to happen in Maharashtra.

For us, every seat is important.

Don't you feel that the Sena could face problems while reaching out to people as it played the role of the Opposition even while sharing power in the state?

We have fought the Lok Sabha polls together.

Sometimes, even if you are in power, you have to raise certain issues aggressively in the cabinet or in the ruling front, taking into consideration the interests of the state, nation or people and without bothering about the consequences.

We have done that.

It is in the grain of the Shiv Sena that it speaks out if it disagrees with a certain thing.

Seat sharing in the state will be 50:50 between the BJP and the Sena as per general discussion between (BJP national President) chief Amit (Anilchandra) Shah and (Sena President) Uddhav Thackeray.

This has been decided.

I don't think there will be many problems after the results.

But what about the issue of chief ministership?

It covers everything, all posts and positions.

So you are suggesting there are no differences on the key issue?

Anyone might say anything, but there are no differences between us.

We are reassured as this has been decided by Sena Chief Thackeray and Shah. It is said that youth is the flavour of this political season, so would Aaditya Thackeray be contesting the polls?

We feel Aaditya should contest the polls.

He is not only fresh, but is known for his innovative ideas and studious nature.

He should be the youth face of Sena and lead Maharashtra.

The emergence of the Vanchit Bahujan Aghadi is changing politics in the state as it is openly using the caste card by announcing the caste of its candidate. How do you see this?

In Maharashtra so far, candidature was not distributed based on caste.

There were no such instances even when Dr B R Ambedkar's Republican Party of India was present in the state or even before that.

But the VBA set up by Prakash Ambedkar and Asaduddin Owaisi in the Lok Sabha polls showed the caste of the candidate along with his name.

But people of these castes have been made candidates by all political parties and also represented in the government.

Maharashtra that has given Mahatma Phule, B R Ambedkar and Shahu Maharaj as also Yashwantrao Chavan and Bal Thackeray has not done much caste politics.

That is why Maharashtra has remained united.

Who is your main opponent in the assembly polls? Incidentally, besides the Congress and the Nationalist Congress Party, there is also Raj Thackeray's Maharashtra Navnirman Sena that campaigned for the Opposition but did not contest the Lok Sabha polls.

If you look at the results of the Lok Sabha polls, the Opposition parties have almost become invisible in Maharashtra.

The Congress has no leader in the state and its condition is really pitiable.

The NCP has got demoralised and has been severely hit on the ground.

But it looks like Sharad Pawar is still in a combative mood.

Pawar had also geared up for the battle in the Lok Sabha polls.

No doubt, he is a stalwart.

At this age, he looks like a lone ranger putting up a fight not only for the NCP, but for the Congress too.

The fact is the Opposition parties have been rejected by the people of Maharashtra as they have not played their role properly.

So how do you see the fight in the polls?

It will be a one-sided affair.

What would be the issues as the Opposition is alleging that the last three years of the Fadnavis government has witnessed 12,000 suicides by farmers? The state is also witnessing severe water scarcity as also drought.

The Opposition might be making claims about suicides, but it is incorrect to say that so many deaths have occurred in the last four years.

Reasons for the suicides also include nature's fury.

At every place possible, the chief minister and Uddhav Thackeray have reached out and offered succour.

But what can be done if there are no rains? The drought is worse than that in 1971.

Still, cattle camps have been set up in every district and taluka.

We are helping farmers who are migrating.

The government is carrying out massive rehabilitation.

But there is a feeling that Gujarat has surged ahead of Maharashtra...

You must have seen in the last five years... It depends on the power and support one gets from the Centre.

Gujarat and Maharashtra have not been much different rather have been dependent on each other.

In fact, the economy of Gujarat is dependent on Mumbai even today.

We do not subscribe to the view that Maharashtra has been relegated and Gujarat has surged ahead. But the question remains about who between the Shiv Sena and the BJP is the 'elder brother' because till 2014 it was considered that the Sena is the 'elder' in the state.

They (Sena and BJP) are twins. 28 years back when the alliance took birth, there was no senior, no junior.

What will happen on the issue of the next CM?

At this moment, there is no dispute between us on any issue including the chief ministership.

But who will be projected as the CM candidate?

At present, Fadnavis is the CM.

After the results, his party would decide whom to make the CM.

In our party, we will decide whom to make CM.

We will decide together.

When we say that Aaditya Thackeray should lead the state, that leadership is of political nature. 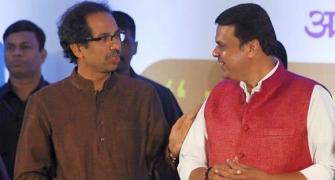