News
Business
Movies
Sports
Cricket
Get Ahead
Money Tips
Shopping
Sign in  |  Create a Rediffmail account
Rediff.com  » News » And the winner of the Wildlife Photographer of the year is...

And the winner of the Wildlife Photographer of the year is... 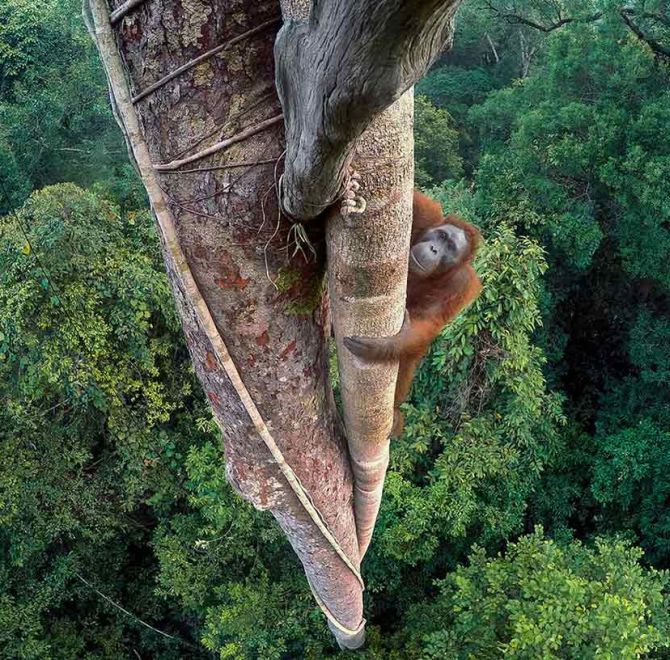 If you love the wild and animals, this is one feature you mustn’t miss.

The Wildlife Photographer of the Year, developed and produced by the Natural History Museum, London, announced its winners for 2016 and we guarantee you that these images will blow your mind.

This year’s competition was one of the fiercest to date, attracting almost 50,000 entries from professionals and amateurs across 95 countries. A young male orangutan makes the 30-metre (100-foot) climb up the thickest root of the strangler fig that has entwined itself around a tree emerging high above the canopy. The backdrop is the rich rainforest of the Gunung Palung National Park, in West Kalimantan, one of the few protected orangutan strongholds in Indonesian Borneo. The orangutan has returned to feast on the crop of figs. He has a mental map of the likely fruiting trees in his huge range, and he has already feasted here. Tim knew he would return and, more important, that there was no way to reach the top -- no route through the canopy -- other than up the tree. But he had to do three days of climbing up and down himself, by rope, to place in position several GoPro cameras that he could trigger remotely to give him a chance of not only a wide?angle view of the forest below but also a view of the orangutan’s face from above. This shot was the one he had long visualised, looking down on the orangutan within its forest home. Photograph: Tim Laman/Wildlife Photographer of the Year 2016 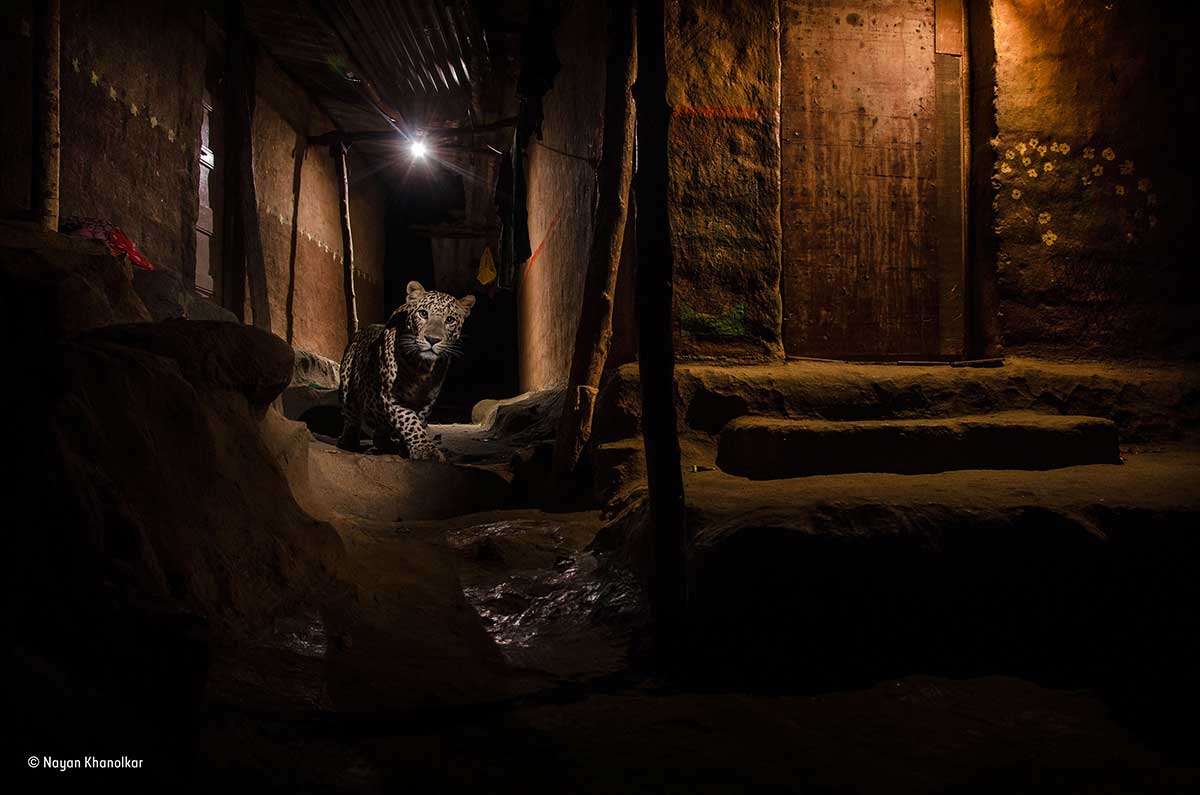 At night, in the Aarey Milk Colony in a suburb of Mumbai bordering SanjayGandhiNational Park, leopards slip ghost-like through the maze of alleys, looking for food (especially stray dogs). The Warli people living in the area respect the big cats.

Despite close encounters and occasional attacks (a particular spate coinciding with the relocation of leopards from other areas into the park), the cats are an accepted part of their lives and their culture, seen in the traditional paintings that decorate the walls of their homes. The leopard is not only the most versatile of the world’s big cats but possibly the most persecuted. With growing human-leopard conflicts elsewhere grabbing the headlines, Nayan was determined to use his pictures to show how things can be different with tolerance and planning. Once he had convinced the Warli people of his plan, they supplied him with valuable information, as well as keeping an eye on his equipment. Photograph: Nayan Khanolkar/Wildlife Photographer of the Year 2016 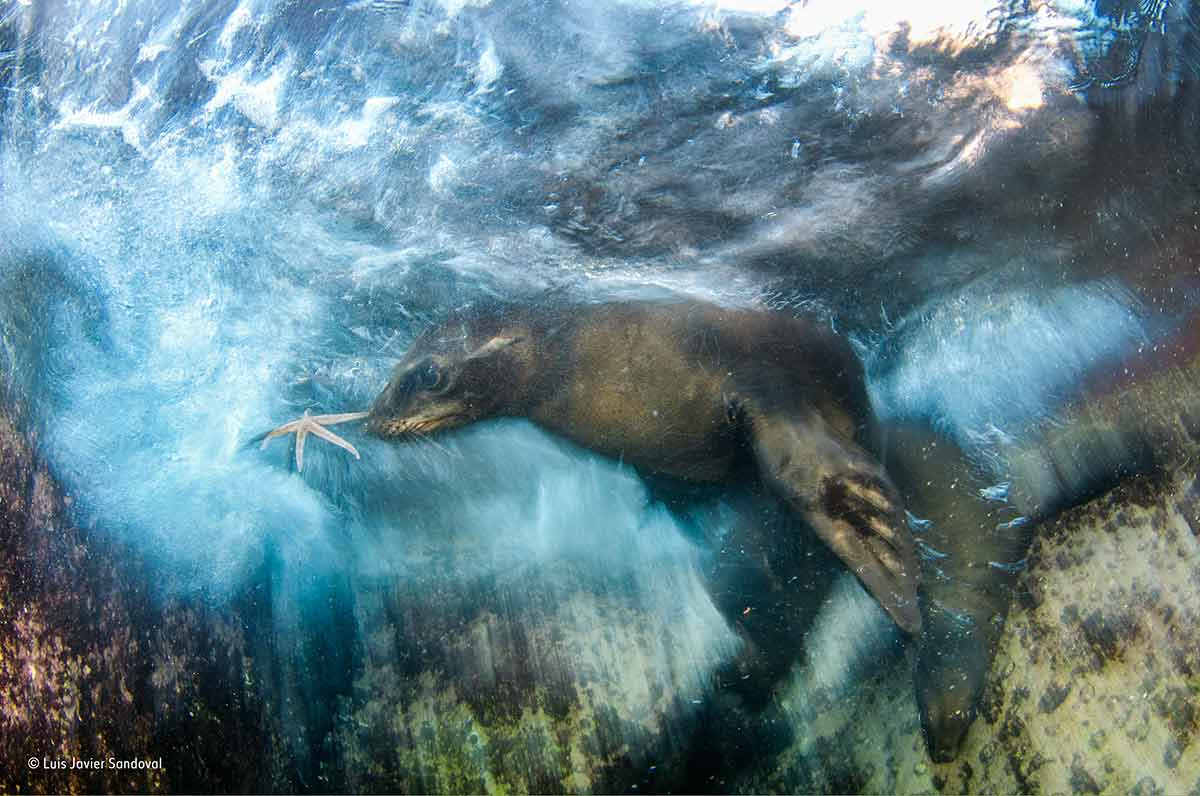 As soon as Luis slipped into the water, the curious young California sea lions came over for a better look. He had arrived the night before at the island of Espíritu Santo in the Gulf of California, sleeping aboard his boat so that he would be ready to dive at sunrise. He had in mind a picture that needed warm light, a slow shutter speed and friendly subjects. One of the pups dived down, swimming gracefully with its strong fore-flippers (sea lions are also remarkably agile on land, since they can control each of their hind?flippers independently). It grabbed a starfish from the bottom and started throwing it to Luis. ‘I love the way sea lions interact with divers and how smart they are,’ says Luis. Photograph: Luis Javier Sandoval/Wildlife Photographer of the Year 2016 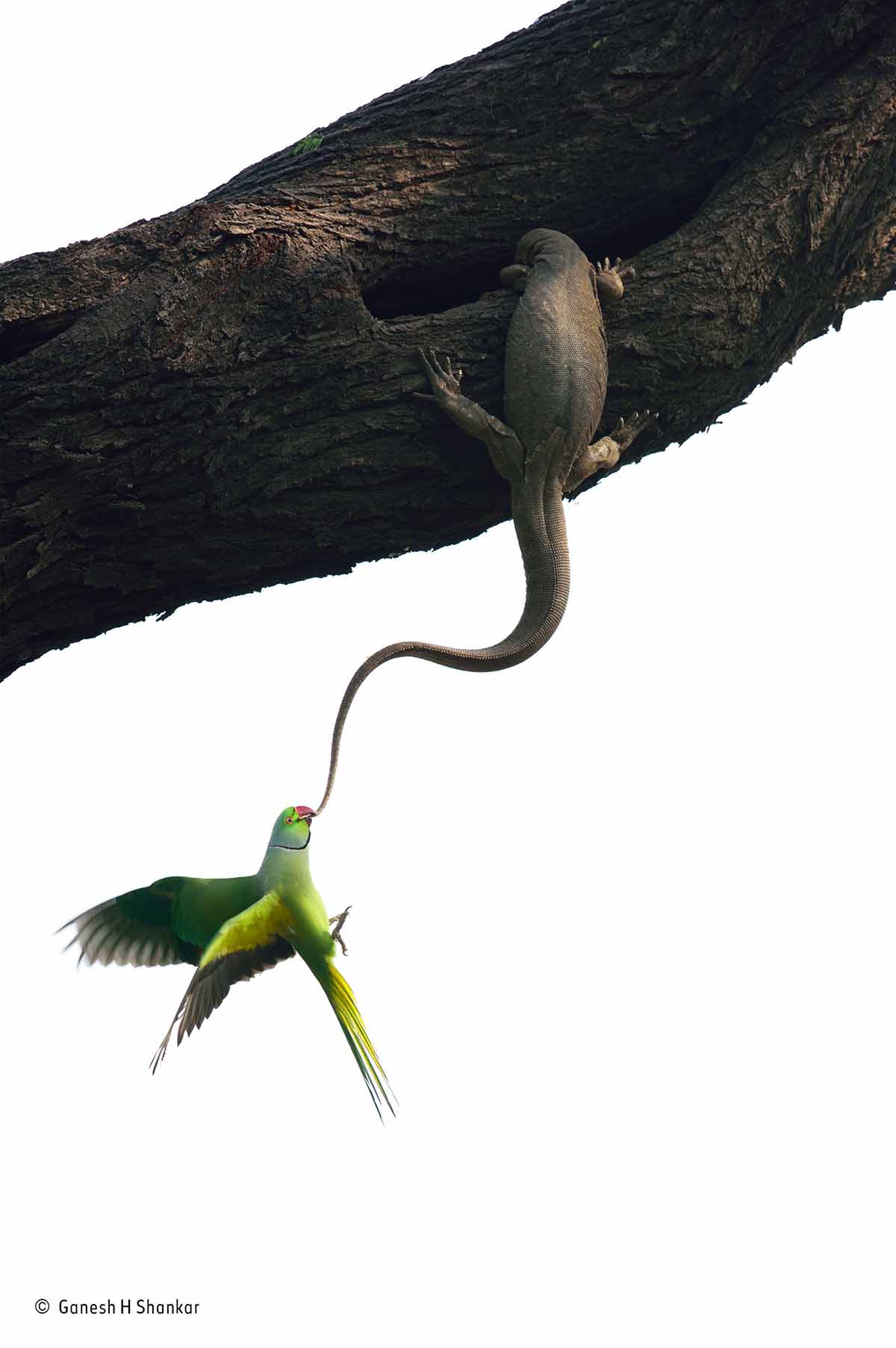 These Indian rose-ringed parakeets were not happy. They had returned to their roosting and nesting hole high up in a tree in India’s KeoladeoNational Park (also known as Bharatpur Bird Sanctuary) to find that a Bengal monitor lizard had taken up residence. The birds immediately set about trying to evict the squatter. They bit the monitor lizard’s tail, hanging on for a couple of seconds at a time, until it retreated into the hole. They would then harass it when it tried to come out to bask. This went on for two days. But the action only lasted a couple of seconds at a time and was fast-moving. The branch was also high up, and Ganesh had to shoot against the light. Eventually the parakeets gave up and left, presumably to try to find another place to rear their young. Photograph: Ganesh H Shankar/Wildlife Photographer of the Year 2016

The moon and the crow
Gideon Knight, UK
Winner, Young Wildlife Photographer of the Year 2016 A crow in a tree in a park: a common enough scene. It was one that Gideon had seen many times near his home in London’s ValentinesPark, which he visits regularly to take photographs. But as the blue light of dusk crept in and the full moon rose, the scene transformed. The spindly twigs of the sycamore tree silhouetted against the sky ‘made it feel almost supernatural, like something out of a fairy tale,’ says Gideon. Photograph: Gideon Knight/Wildlife Photographer of the Year 2016 Every day in early spring, Mats walked in the forest near his home in Bashult, southern Sweden, enjoying the company of a pair of Eurasian pygmy owls -- until the night he found one of them lying dead on the forest floor. Pygmy owls, with their distinctive rounded heads and lack of ear tufts, are the smallest owls in Europe, barely 19 centimetres (7½ inches) long, though with large feet that enable them to carry prey almost as big as themselves. They also hunt in the day. Nesting in tree cavities, especially in conifer woodland, they form pair bonds in autumn that last through to spring and sometimes for more than one breeding season. ‘The owl’s resting posture reflected my sadness for its lost companion,’ recalls Mats. Preferring to work in black and white – ‘it conveys the feeling better’ – he captured the melancholy of the moment, framing the solitary owl within the bare branches, lit by the first light of dawn. Photograph: Mats Andersson/Wildlife Photographer of the Year 2016 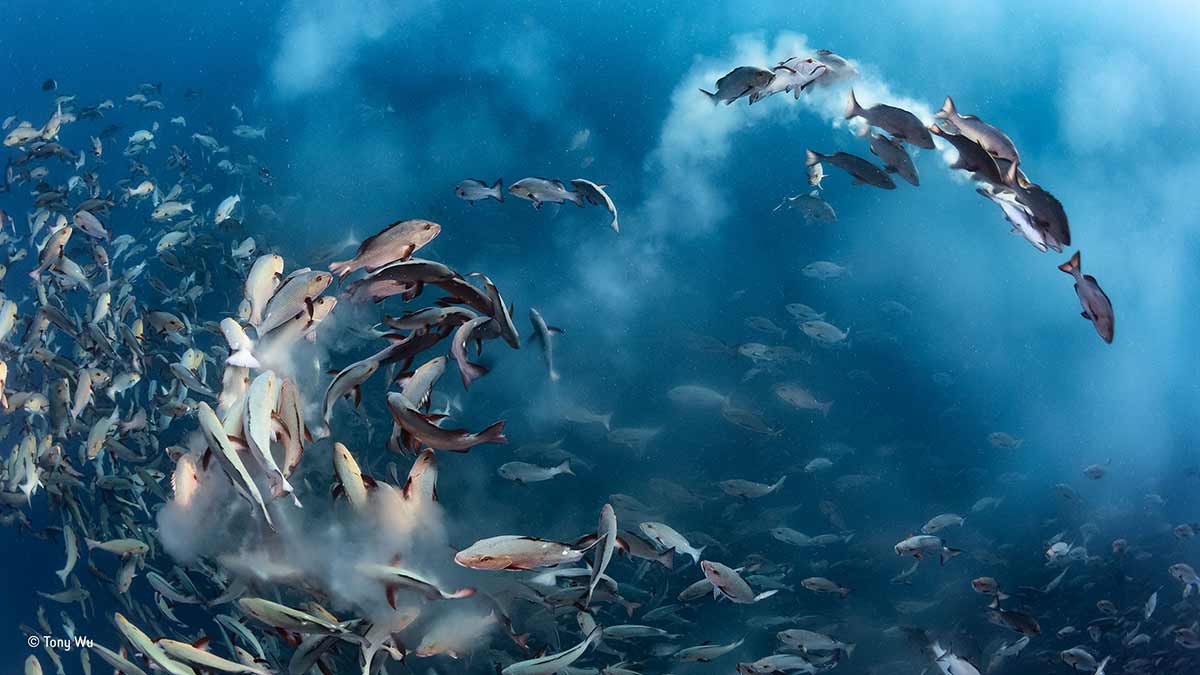 For several days each month (in tandem with the full moon), thousands of two?spot red snappers gather to spawn around Palau in the western Pacific Ocean. The action is intense as the fish fill the water with sperm and eggs, and predators arrive to take advantage of the bounty. Having read about the drama, Tony couldn’t understand why there were so few photos of it -- until he hit the water there for the first time, in 2012. The currents were unrelenting -- ideal for eggs to be swept swiftly away but a struggle for him to keep up with the fast?moving fish. Also, the light was low, and the water was clouded with sperm and eggs. That first attempt failed, but he has returned every year to try to capture the event. Noticing that the spawning ran ‘like a chain reaction up and down the mass of fish’, his success finally came when he positioned himself so that the action came to him. Rewarded with a grandstand view, he was intrigued to see that the fish rapidly changed colour during mating from their standard red to a multitude of hues and patterns. Photograph: Tony Wu/Wildlife Photographer of the Year 2016 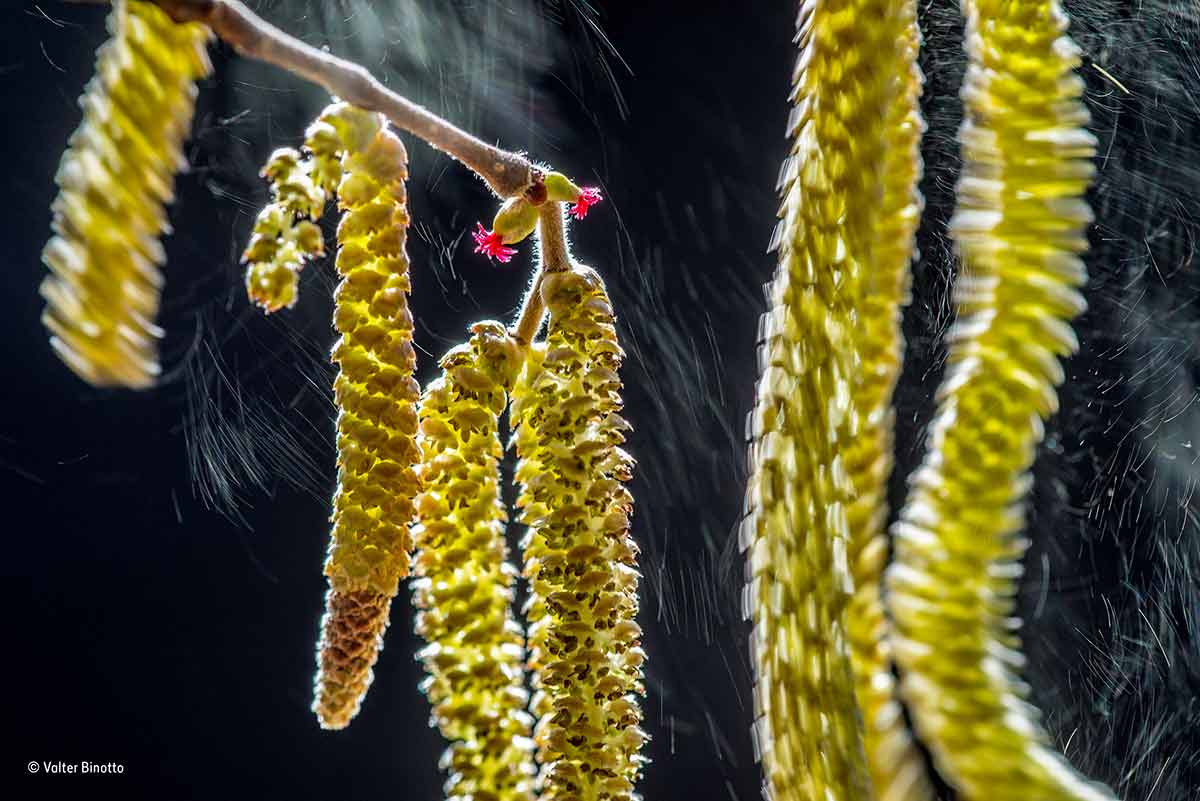 With every gust of wind, showers of pollen were released, lit up by the winter sunshine. The hazel tree was near Valter’s home in northern Italy, and to create the dark background, he positioned himself to backlight the flowers. Hazel has both male and female flowers on the same tree, though the pollen must be transferred between trees for fertilization. Each catkin comprises an average of 240 male flowers, while the female flower is a small bud-like structure with a red-tufted stigma. The pollen-producing catkins open early in the year, before the leaves are out, and release huge amounts of pollen to be carried away by the wind. And now recent research suggests that bees may also play a role. The catkins are an important source of pollen for early bees and have a bee?friendly structure, while the red colour of the female flowers may entice insects to land on them. Photograph: Valter Binotto/Wildlife Photographer of the Year 2016 Nothing prepared Paul for what he saw: some 4,000 defrosting pangolins (5 tonnes) from one of the largest seizures of the animals on record. They were destined for China and Vietnam for the exotic?meat trade or for traditional medicine (their scales are thought, wrongly, to treat a variety of ailments). Pangolins have become the world’s most trafficked animals, with all eight species targeted. These Asian victims, mostly Sunda pangolins, were part of a huge seizure -- a joint operation between Indonesia’s police and the World Conservation Society -- found hidden in a shipping container behind a façade of frozen fish, ready for export from the major port of Belawan in Sumatra. Also seized were 96 live pangolins (destined to be force-fed to increase their size), along with 100 kilos (220 pounds) of pangolin scales (formed from keratin, the same substance in fingernails and rhino horn) worth some $1.8 million on the black market, and 24 bear paws. Photograph: Paul Hilton/ Wildlife Photographer of the Year 2016 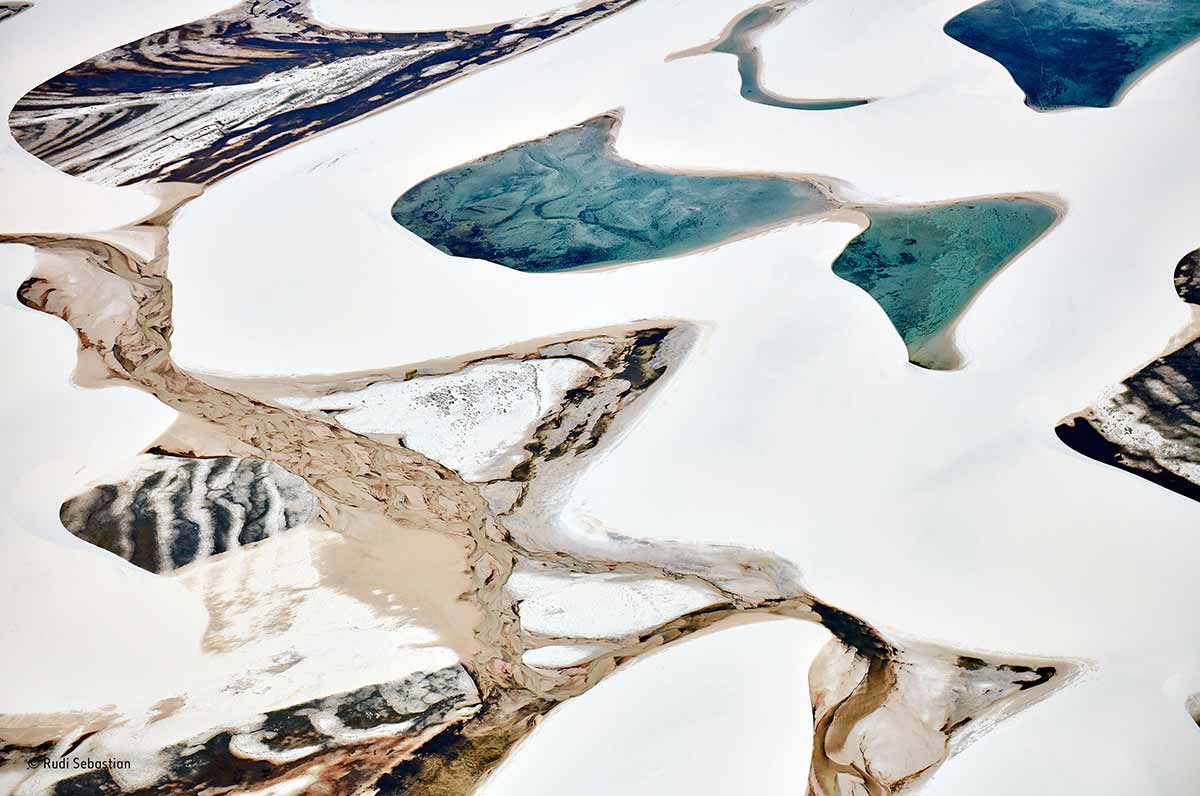 The pristine white sand of Brazil’s LençóisMaranhensesNational Park offers a blank canvas to the rain. In the dry season, sand from the coast is blown by powerful Atlantic winds as far as 50 kilometres inland, sculpting a vast expanse of crescent-shaped dunes up to 40 metres (130 feet) high. With the onset of the rains, the magic begins. An impermeable layer beneath the sand allows water to collect in the dune valleys, forming thousands of transient lagoons, some more than 90 metres (295 feet) long. Bacteria and algae tint the clear water in countless shades of green and blue, while streams carrying sediment from the distant rainforest make their mark with browns and blacks. Patterns appear as the water evaporates, leaving behind organic remains. Photograph: Rudi Sebastian/Wildlife Photographer of the Year 2016 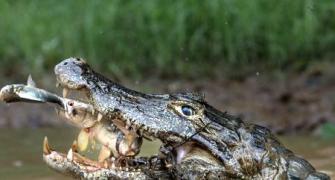 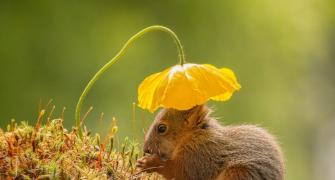 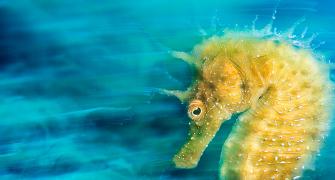 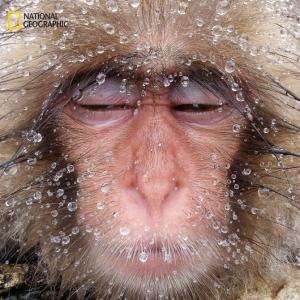