Polling will be held on Monday to elect Maharashtra and Haryana assemblies with the Bharatiya Janata Party and its allies seeking to retain power in the two states on the back of the recent Lok Sabha polls victory, while the opposition is hoping to turn the tide by taking advantage of any anti-incumbency. 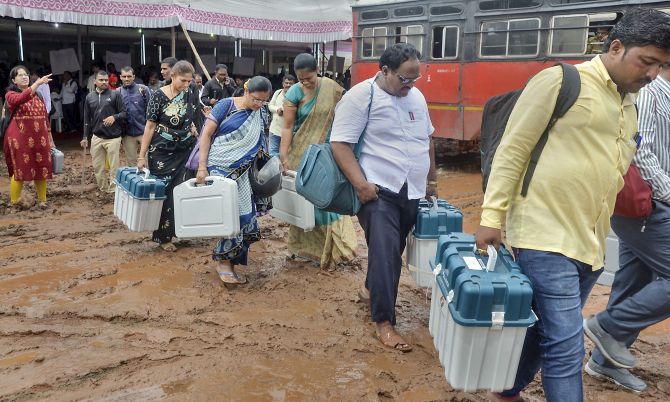 IMAGE: Election officials walk through a damp field as they leave for their respective polling stations from a distribution centre, on the eve of Maharashtra assembly elections in Sangli. Photograph: PTI Photos

Bypolls will also be held to 51 assembly seats and two Lok Sabha constituencies spread across 18 states.

In Maharashtra, where the 'Mahayuti' alliance of BJP, Shiv Sena and smaller parties is against the 'Maha-agadhi' led by the Congress and the Nationalist Congress Party, a total of 8,98,39,600 people, including 4,28,43,635 women, are eligible to vote.

The ruling BJP is locked in a contest with the opposition Congress and the fledgling Jannayak Janata Party for the 90 assembly seats in Haryana which has over 1.83 crore voters, including 85 lakh women and 252 transgenders, while 19,578 polling stations have been set up.

Polling will be held from 7 am to 6 pm. Tight security arrangements have been made with deployment of more than three lakh personnel from state police and central forces in Maharashtra, while over 75,000 security personnel have been mobilised in Haryana.

Counting of votes will be on October 24. 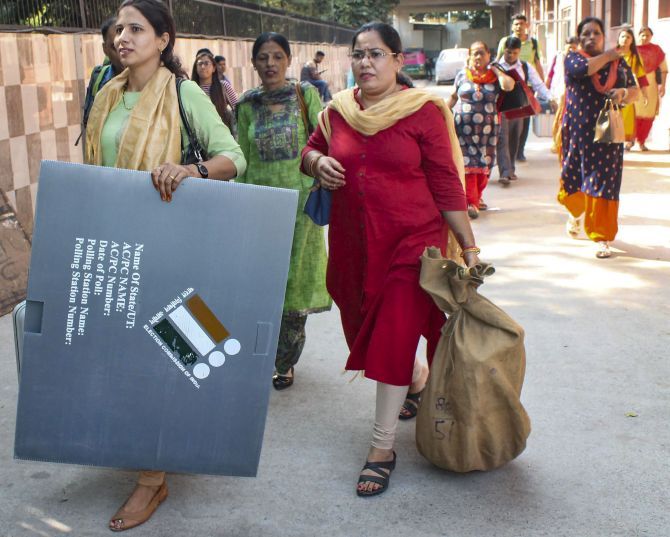 IMAGE: Polling officials carrying the Electronic Voting Machine and other necessary inputs leave for their poll duty on the eve of Haryana assembly elections in Sonipat. Photograph: PTI Photo

The high-voltage electioneering by the BJP saw participation of a galaxy of leaders led by Prime Minister Narendra Modi and his cabinet colleagues Amit Shah and Rajnath Singh, as it continued to aggressively raise the nationalism plank by focusing on scrapping of Article 370 provisions on special status to Jammu and Kashmir and targeted the opposition on national security and corruption.

The opposition tried to corner the BJP governments at the Centre and in the states on the handling of the economy with Congress leader Rahul Gandhi blaming the ruling party for the economic slowdown and unemployment and highlighting issues like "failure" of demonetisation and GST rollout.

The BJP, which is seeking a second straight term under Chief Minister Devendra Fadnavis in Maharashtra, is contesting 164 seats, which include candidates of smaller allies contesting on its lotus symbol, while Sena has fielded candidates on 126 seats.

On the other hand, the Congress has fielded 147 candidates and the ally NCP 121.

The opposition campaign was, however, lacklusture as both the Congress and the NCP were plagued by infighting and desertions in the run-up to the polls.

The bypoll for Satara Lok Sabha constituency will also be held on October 21. Former NCP leader and sitting MP Udayanraje Bhosale is in the fray from the seat on a BJP ticket against Shriniwas Patil of the Congress-NCP combine.

Voting will also be held in bypolls to Samastipur (Bihar) Lok Sabha seats which was held by Ram Vilas Paswan's Lok Janshakti Party, a constituent of the National Democratic Alliance.

The campaign in Maharashtra was marked by personal attacks and sharp exchange of barbs between the chief minister and NCP chief Sharad Pawar, who hit the hustings at the age of 79 and addressed a number of rallies.

However, the Congress and NCP failed to hold even a single joint rally.

The campaign also saw an undertone of jostling for supremacy between the BJP and the Sena, which had fought the last assembly elections separately, winning 122 and 63 seats respectively. The Congress had bagged 42 and the NCP 41 seats. 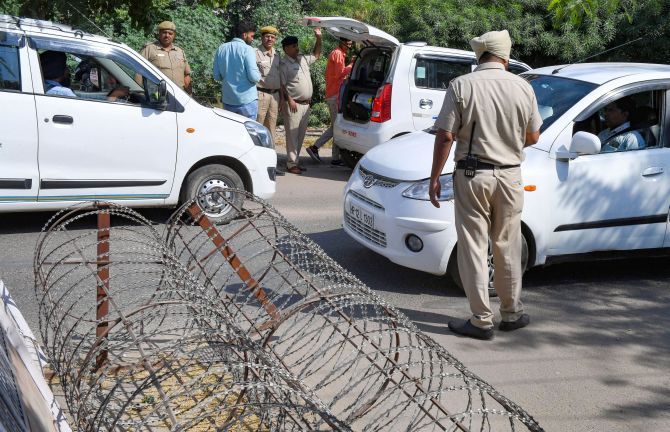 In the April-May Lok Sabha elections, the BJP-Sena alliance won 41 of the 48 Lok Sabha seats in Maharashtra, while the Congress won one and NCP four seats.

Prominent candidates in the fray are Chief Minister Fadnavis and his predecessors from Congress, Ashok Chavan, who is in fray from Bhokar in Nanded district, and Prithviraj Chavan seeking re-election from Karad South in Satara district.

Yuva Sena chief Aaditya Thackeray, son of Uddhav Thackeray, is contesting from Worli in Mumbai. The 29-year-old is the first from the Thackeray family to make debut in electoral politics.

In Haryana, the Congress is hoping to make a comeback following a change in guard in the state, while the BJP led by Chief Minister Manohar Lal Khattar has set a target of winning 75 seats out of 90 in which 1,169 candidates of various political outfits are contesting.

Currently, the BJP has 48 members in state assembly.

The Dushyant Chautala-led JJP, a breakaway faction of the Indian National Lok Dal, is also hoping for an improvement in its prospects following the Lok Sabha debacle. The party had emerged on the scene following a feud in the Chautala clan in Decamber last year.

The BSP, AAP, INLD-SAD combine, Swaraj India and the Loktantra Suraksha Party have thrown their hat into the ring, though none of them is fighting on all 90 seats.

In the 2014 assembly polls, the BJP for the first time came to power in Haryana winning 47 seats. It won the Jind bypolls earlier this year, taking its total strength in the state assembly to 48. The INLD had 19 MLAs while the Congress has 17 legislators. The BSP and the SAD had bagged one seat each in the last polls while five were Independents.

Voting will also be held in bypolls to 51 assembly seats spread across 17 states.

The BJP and its allies had nearly 30 of these assembly seats, while the Congress had won 12 and the rest were with regional parties.

Among the states ruled by the BJP and its allies, the maximum 11 seats will have bypolls in Uttar Pradesh, followed by six in Gujarat, five in Bihar, four in Assam and two each in Himachal Pradesh and Tamil Nadu.

The other states where bypolls will be held are Punjab (4 seats), Kerala (5 seats), Sikkim (3 seats), Rajasthan (two seats) and one seat each in Arunachal Pradesh, Madhya Pradesh, Odisha, Chhattisgarh, Puducherry, Meghalaya and Telangana.

The exercise is coinciding with assembly elections in Haryana and Maharashtra, the first major elections after the BJP retained power in the Lok Sabha polls in April-May winning 303 seats out of 543.

In politically crucial Uttar Pradesh, the polls are seen as a litmus test for the Yogi Adityanath government which has completed 30 months in office.

It is a four-cornered contest with the BJP, Bahujan Samaj Party, Samajwadi Partyand Congress fielding candidates on all 11 assembly seats.

Eight of these seats were held earlier by the BJP and one by BJP ally Apna Dal (Sonelal). The seats of Rampur and Jalalpur (Ambedkarnagar) were held by the Samajwadi Party and Bahujan Samaj Party, respectively

The Congress is hoping to consolidate its thin majority in Rajasthan by wresting the two seats from the BJP and its ally RLP. Of the 200 assembly seats in Rajasthan, the Congress has 106 MLAs, including the six who defected to the party from the BSP recently

The AIADMK and DMK are locked in a keen contest in Vikravandi and Nanguneri Assembly seats in Tami Nadu.

Sikkim Chief Minister Prem Singh Tamang is contesting from Poklok Kamrang constitueny, one of the three seats where bypolls will be held in the state. Tamang aka Golay is the president of Sikkim Krantikari Morcha, which has tied up with the BJP. 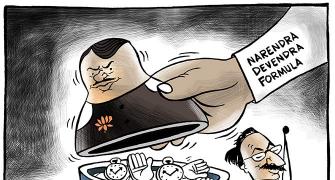 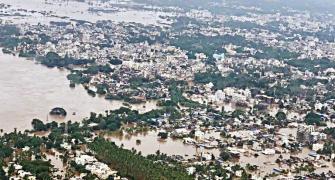 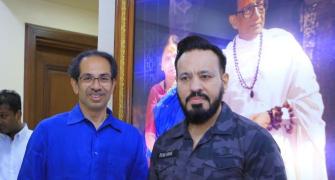 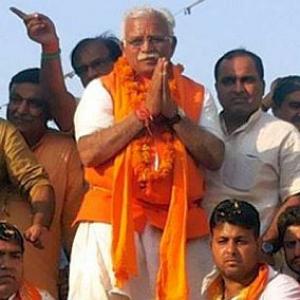