The major players in Maharashtra are the ruling alliance Bharatiya Janata Party-Shiv Sena, which also includes Republican Party of India-Athawale, and the Opposition alliance of Congress-Nationalist Congress Party.

The BJP-Sena alliance won the 2014 assembly elections in the state winning 185 seats in the 288-member assembly.

The Devendra Fadnavis-led government in the state is most likely to get another term.

Rediff Labs analysed the 2014 assembly election results to develop a Sentiment Meter for the 2019 battle in Maharashtra.

The below graph is based only on 2014 assembly elections data, which shows that the BJP-Sena combine is likely to return to power with a bigger margin in the absence of a major vote swing towards the opposition parties.

The Congress-NCP alliance doesn't seem to be able form a government even after a 10 per cent vote swing in its favour. 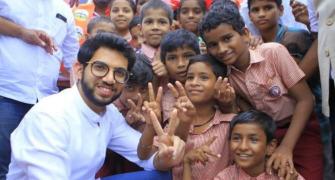