“Have a damn heart.”

This is how a student, one of the lucky survivors of the Parkland, Florida school massacre responded to United States President Donald Trump’s tweets, linking the incident to the Federal Bureau of Investigation’s failure to avert the tragedy and the agency doggedly pursuing the alleged Russian links to his 2016 election campaign. 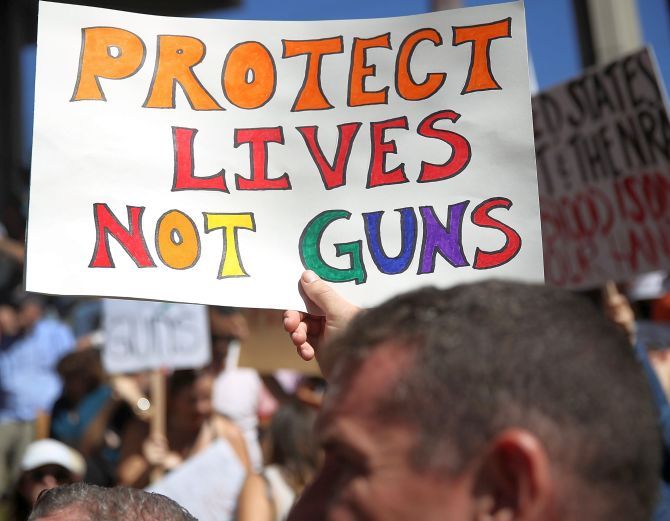 IMAGE: People join together after a school shooting that killed 17 to protest against guns on the steps of the Broward County Federal courthouse in Fort Lauderdale, Florida. Photograph: Joe Raedle/Getty Images

Trump tweeted, “Very sad that the FBI missed all of the many signals sent out by the Florida school shooter. This is not acceptable. They are spending too much time trying to prove Russian collusion with the Trump campaign - there is no collusion. Get back to the basics and make us all proud!”

Trump’s tweet on Saturday on the shooting incident caused considerable outrage online, including among apparent survivors of the shooting, US media reports said. 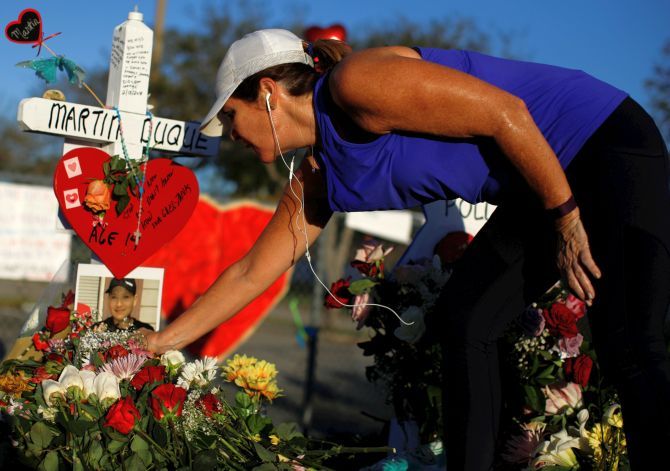 IMAGE: A woman puts flowers in a cross placed in front of the fence of the Marjory Stoneman Douglas High School to commemorate Martin Duque, one of the victims of the mass shooting, in Parkland, Florida. Photograph: Carlos Garcia Rawlins/Reuters

A 19-year-old former student, Nikolas Cruz, who was previously expelled from the school, has been charged with 17 counts of premeditated murder after killing 17 people at Marjory Stoneman Douglas High School in Parkland, Florida. He was armed with an AR-15 rifle, which he used to carry out the rampage.

The massacre, among the deadliest school shootings in US history, has once again sparked a debate about lax US gun laws and lawmakers’ continued inaction on gun control.

“We are losing our lives while the adults are playing around,” survivor Cameron Kasky said.

“Seventeen innocent people were brutally murdered at my school, a place where they should have felt safe. Their lives were gone in an instant. You are the President of the United States and you have the audacity to put this on Russia as an excuse. I guess I should expect that from you,” one student commented. 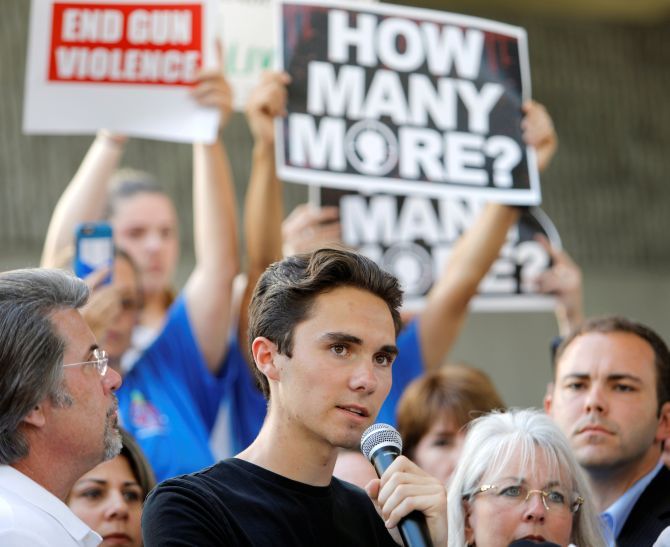 IMAGE: David Hogg, a senior at Marjory Stoneman Douglas High School, speaks at a rally calling for more gun control days after the shooting at his school, in Fort Lauderdale. Photograph: Jonathan Drake/Reuters

“My friends were brutally murdered and you have the nerve to make this about Russia. I can not believe this,” the tweet said.

“Oh my god. 17 of my classmates and friends are gone and you have the audacity to make this about Russia???!! Have a damn heart. You can keep all of your fake and meaningless ‘thoughts and prayers’,” another tweeted.

Several of the students’ responses went viral, getting thousands of retweets.

Many students who survived the Parkland shooting have been vocal about what they experienced, and about the action they want to see from those in power. 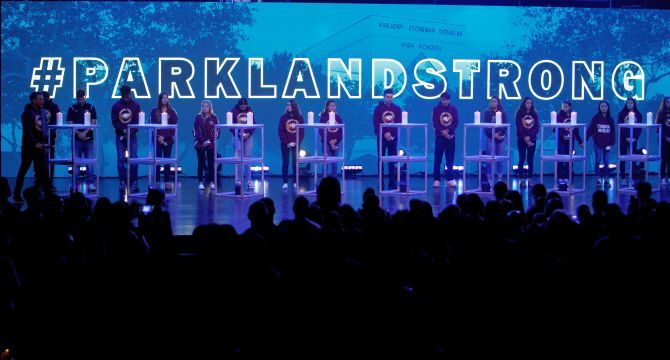 IMAGE: Local students, including some from Marjory Stoneman Douglas High School in Parkland, participate in a vigil for victims of the school shooting, at the Church By The Glades megachurch in Coral Springs, Florida. Photograph: Jonathan Drake/Reuters

Alex Wind, a survivor, told CNN that he did not plan to attend a listening session Trump has scheduled on Wednesday with high school students and teachers, and that the US President needed to reach out to the students.

“If Donald Trump wants to listen to us, he should have taken the first invitation,” Wind said. “We are not going to come to him. He is going to need to come to us.”

Emma Gonzalez said she suspected his scheduled listening session could be a sign Trump does not want to face outraged victims of the shooting. IMAGE: A protester is framed by signs calling for more gun control after the shooting claimed 17 lives. Photograph: Jonathan Drake/Reuters

“The fact that he has organised this just proves that he’s scared of us and that he doesn’t want to have to face us,” Gonzalez said.

Trump on Friday visited a Florida hospital where many of the victims were treated, as well as the sheriff’s office.

David Hogg, one of the students, spoke on NBC’s “Meet the Press” and issued an angry and passionate call for Trump to take action on the issue. 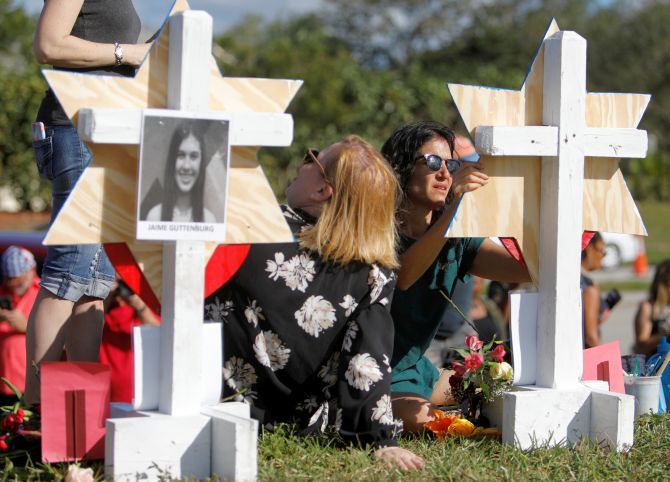 IMAGE: A woman  writes on a Star of David for one of the victims of the shooting at Marjory Stoneman Douglas High School at a memorial at the school. Photograph: Jonathan Drake/Reuters

“You’re the President,” Hogg said. “You’re supposed to bring this nation together, not divide us. How dare you? Children are dying, and their blood is on your hands because of that.

“Please take action. Stop going on vacation in Mar-a-Lago. Take action. Work with Congress. Your party controls both the House and Senate. Take action, get some bills passed, and for God’s sake, let’s save some lives,” Hogg said.

Students who survived the mass shooting announced plans to march on Washington in a bid to “shame” politicians into reforming laws that make firearms readily available.

The ‘March for Our Lives’ will take place on March 24, with sister rallies planned across the country.

They pledged to make Wednesday’s slaughter in Parkland, Florida a turning point in America’s deadlocked debate on gun control. 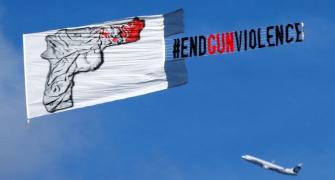 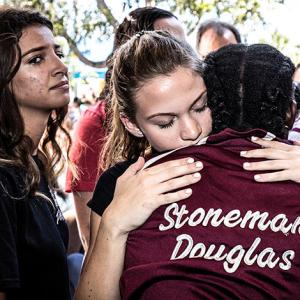 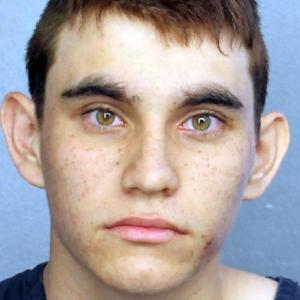