Hundreds of migrant labourers gathered on an approach road to Bandra Terminus in Mumbai on Tuesday before the departure of a Shramik Special train for Bihar, leading to chaos in the area for some time. The crowd was later dispersed by police, a Western Railway official said.

The incident occurred over a month after hundreds of migrant workers had assembled near the Bandra station demanding transport for their repatriation to their native places in the wake of the coronavirus-enforced lockdown.

In a video clip of Tuesday's incident that went viral on social media, a large number of migrants were seen carrying their luggage and running towards the gate of the Bandra Terminus.

The crowd started gathering in the area around 11 am, sources said.

The Western Railway in a statement later said a Shramik Special train was scheduled for Purnia from the Bandra Terminus in which passengers registered with the state authorities were to travel.

However, many people, who were not registered and not called by the state authorities, gathered on a road and a bridge near the station, it said. "The bona fide passengers were checked and allowed to enter the station by the state machinery. The train left the Bandra Terminus around 12 noon with 1,700 labourers and their families who were entitled to travel," Western Railway's Chief Public Relations Officer Ravinder Bhakar said.

The crowd outside the station was later dispersed by police, a railway official said.

Some migrants later said they had received calls on their phones a day earlier with the callers claiming to be police personnel who informed them that they were eligible to board the train. "I received a call on my mobile phone on Monday with a man saying that he was a police personnel. He told me that I could board the train on Tuesday. The caller said he would call back again to inform me about the timing of the train, but never got back," claimed Mohammed Ahmed, a migrant labourer.

Another labourer Sanjeev Kumar said he had completed the mandatory registration process and was informed over phone by 'policemen' about the timing of the train, which was to leave on Tuesday. "But when I reached the station, I wasn't allowed to board the train," he said.

A Railway Protection Force (RPF) official said that a word about the Shramik special train leaving for Bihar somehow spread among migrants who rushed to Bandra terminus with the hope of boarding it even without tickets.

An eyewitness said a group of migrants raised slogans against Bihar chief minister Nitish Kumar, but the police immediately dispersed them. Referring to the video clip, a senior RPF officer said it was of the roads outside the station premises which fall under the jurisdiction of the Mumbai Police.

"RPF personnel were deployed inside the station premises and we allowed the bona fide passengers with proper tickets to enter the station and board the train, making them maintain social distance," he said.

The WR has operated 582 Shramik special trains and ferried over 8.30 lakh migrants between May 2 and 18.

All photographs: Sahil Salvi
Source: PTI  -  Edited By: Roshneesh Kmaneck© Copyright 2021 PTI. All rights reserved. Republication or redistribution of PTI content, including by framing or similar means, is expressly prohibited without the prior written consent.
Related News: Bandra, SEE, Mumbai
SHARE THIS STORY
Print this article 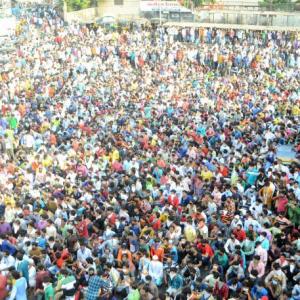