Prime Minister Narendra Modi on Saturday met Mahmoud Abbas on a historic visit to Palestine during which the Palestinian President sought India's support for a multi-country mechanism to achieve a "just and desired peace" with Israel in accordance with the two-state solution. 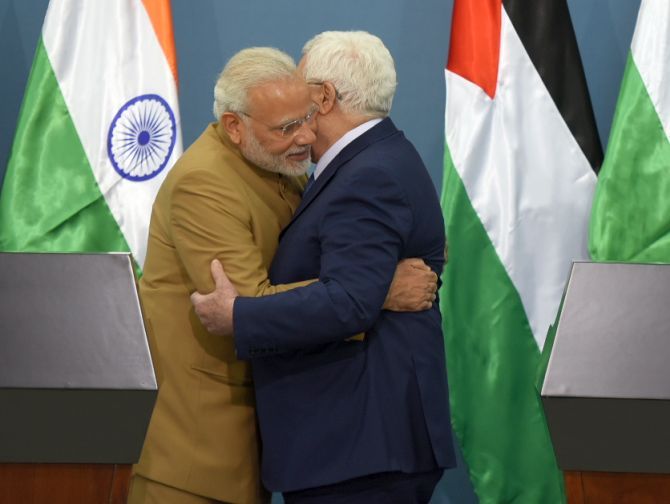 President Abbas accorded a red carpet welcome to Modi, the first Indian prime minister to make an official visit to Palestine, in an official ceremony at the presidential compound, also known as Muqata'a, in Ramallah -- the Palestinian seat of government.

They discussed the full range of India-Palestine ties following which the two sides signed six agreements worth around USD 50 million that includes setting up of a USD 30 million super speciality hospital in Beit Sahur.

Three agreements in the education sector worth USD 5 million, one MoU for procurement of equipment and machinery for the National Printing Press and one for construction of a centre for empowering women were also signed.

At a joint press statement with Modi, President Abbas acknowledged that the Indian leadership has always stood by peace in Palestine.

Abbas said he had "fruitfull and constructive" talks with Prime Minister Modi and he updated the Indian leader on the overall developing situation in Palestine and in the region.

"We have never rejected negotiations; we have been and are still ready for negotiations," he said. IMAGE: The two leaders discussed the full range of India-Palestine ties following which the two sides signed six agreements worth around USD 50 million

Abbas said the formation of a multi-lateral mechanism that is produced by an international peace convention is the most ideal way to broker negotiations with Israel, which is India's strategic partner and among its top arms suppliers.

"We rely on India's role as an international voice of great standing and weigh through its historical role in the Non-Aligned Movement and in all international forum and its increasingly growing power on the strategic and economic levels, in a way that is conducive to just and desired peace in our region," President Abbas said.

The two-state solution envisions independent Israeli and Palestinian states coexisting side by side peacefully. The Palestinians see East Jerusalem as their future capital.

"The support for Palestinian interests in our foreign policy has always been a priority -- continuous and steadfast," Modi said. 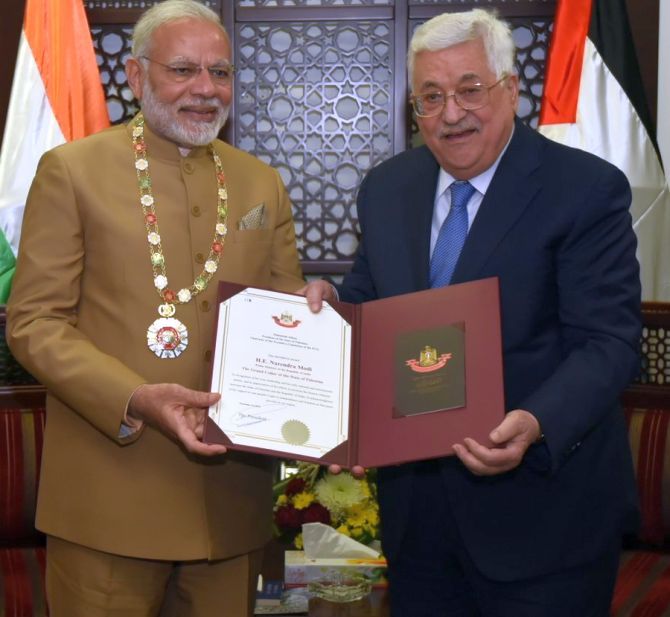 IMAGE: The PM was conferred with the 'Grand Collar of the State of Palestine' by President Abbas, recognising his key contribution to promote relations between India and Palestine.

"Friendship between India and Palestine has stood the test of time. The people of Palestine have shown remarkable courage in the face of several challenges. India will always support Palestine’s development journey," Modi said, adding that India is hopeful of peace and stability in the region.

India hopes for Palestine to soon become a sovereign and independent country in a peaceful environment through dialogue, Prime Minister Modi said, amid applause.

"We hope for peace and stability in Palestine, we believe a permanent solution is possible with dialogue. Only diplomacy and farsightedness can set free from violence and baggage of the past. We know it is not easy but we need to keep trying as a lot is at stake," Modi said, re-iterating New Delhi's well-known stand on the issue.

Though India has shied away from becoming a party in the Israel-Palestinian conflict, the Palestinian leader on several occasions has stressed on a possible role for New Delhi in the Middle East peace process.

India believes in a two-state solution in which both Israel and a future Palestinian state coexist peacefully.

Modi had hosted Israeli Prime Minister Benjamin Netanyahu last month and the two leaders had vowed to further strengthen the friendship between Israel and India.

His visit to Palestine comes amid heightened tensions in the region after US President Donald Trump recognised Jerusalem as the capital of Israel. 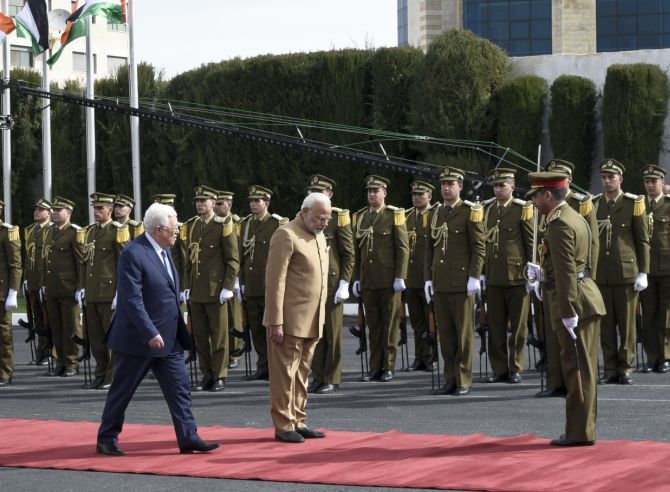 IMAGE: Modi at the ceremonial welcome at the presidential compound, also known as Muqata'a, in Ramallah -- the Palestinian seat of government.

The unilateral US decision to declare Jerusalem as the capital of Israel was challenged at the UN General Assembly where 128 nations, including India, voted to turn down the move as "null and void".

Trump's decision to declare Jerusalem as Israel's capital angered the Palestinians, sparked protests in the Middle East and raised concern that it could further destabilise the region, marred by decades of the Israeli-Palestinian conflict.

Prime Minister Modi had visited Israel in July 2017 to commemorate 25 years of diplomatic relations between the two countries, becoming the first Indian Premier to do so.

During his visit to Israel, Modi did not travel to Ramallah. His standalone visit to Israel had led to many analysts questioning the future of the Indo-Palestine ties.

This time Modi skipped Israel in a clear message that India is de-hyphenating its ties with Israel and Palestine.

The announcement regarding Modi's visit to Ramallah took many by surprise given the growing bonhomie around the Indo- Israel ties. However, senior sources in Israel said on condition of anonymity that India had sounded them off about it long time back, much ahead of Netanyahu's visit to Delhi. President Abbas also conferred the 'Grand Collar of the State of Palestine' on Prime Minister Modi, recognising his key contribution to promote ties between India and Palestine.

Modi, on his part, said, that bestowing the honour on him was a matter of proud moment for India. This was also the reflective of the friendship between India and Palestine.

Earlier, the two leaders exchanged hugs and stood for the national anthem of the two countries and then inspected the guard of honour before their bilateral talks. Archbishop of Catholic Church, Poulos Marcuzzo, and religious leaders of the Al-Aqsa mosque were also at the Muqata'a to greet Modi.

Modi flew in a Jordanian army helicopter straight from Amman to Ramallah, where he was received by his Palestinian counterpart Rami Hamdallah. Prime Minister Modi's chopper was escorted by choppers from Israel Air Force.

Soon after his arrival, Modi visited the Mausoleum of Yasser Arafat and laid a wreath at the grave of the iconic Palestinian leader. He also took a short tour of the Arafat Museum located adjacent to the mausoleum. 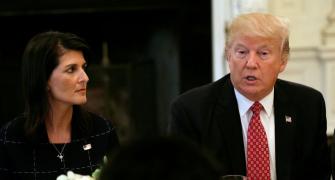 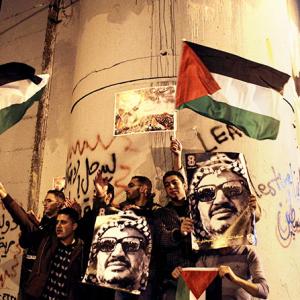