Heavy rains lashed Mumbai and its suburbs on Wednesday, causing flooding on roads and rail tracks and disrupting suburban train services as the south-west monsoon arrived in the city with a bang, while the India Meteorological Department (IMD) issued an alert for more downpour. 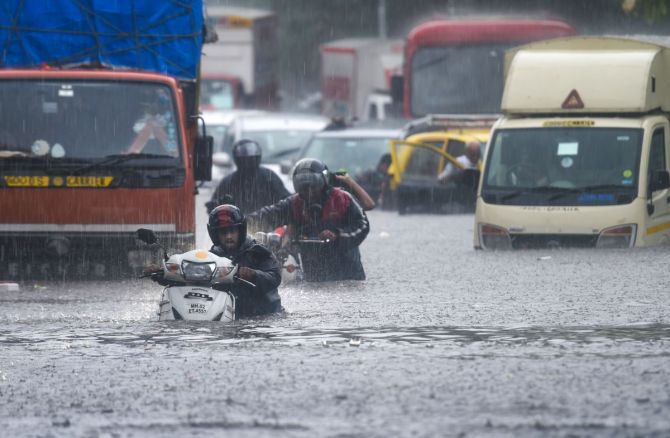 The IMD issued a 'red alert' for Mumbai, and neighbouring Thane, Palghar and Raigad districts, warning of very heavy to extremely heavy rainfall at isolated places there.

The first rains of this year's monsoon season in Mumbai caused water-logging in various parts of the city, prompting the traffic police to shut four subways and forcing motorists to abandon their vehicles on roads.

The heavy downpour also disrupted local train services, which are running only for personnel engaged in health and other essential services, and are out of bound for general commuters in view of the COVID-19 pandemic.

While there were fewer vehicles on the city roads amid the downpour, motorcyclists and other two-wheeler riders were unable to manoeuvre their vehicles at some of the flooded places.

The traffic police closed Milan, Khar, Andheri and Malad subways for motorists due to water-logging at these places.

"We have closed the subways due to water-logging of up to two feet at these junctions. However, traffic is smooth on the SV Road, Linking Road and the Western Express Highway.

Heavy rains caused low visibility and increased the risk of accidents, hence the traffic police personnel are on roads to prevent such incidents, the official said. 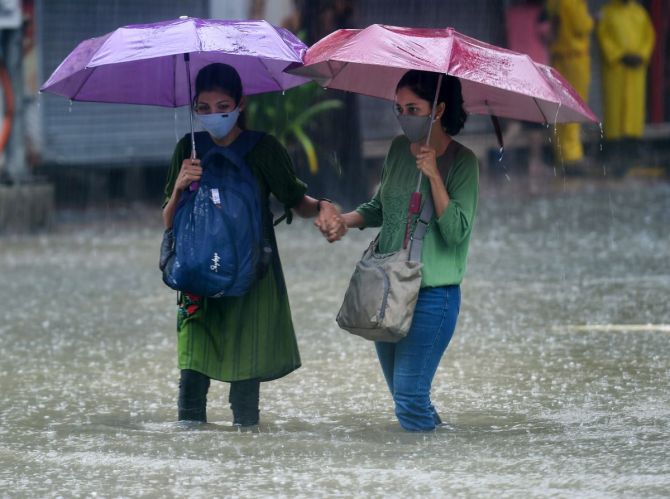 Cranes were used to clear roads on which motorists had abandoned their vehicles due to water-logging, he added.

The city police appealed to Mumbaikars not to step out of their homes unnecessarily and cautioned them against travelling to some of the inundated areas.

Mumbai and its suburbs experienced thunderstorms along with moderate to intense spells of rainfall during the day, it added.

Suburban train services from Mumbai's Chhatrapati Shivaji MaharajTerminus (CSMT) to neighbouring Thane and Vashi in Navi Mumbai were suspended due to water-logging on tracks, officials said.

Routes of some BEST buses, run by the city civic body's transport wing, were diverted to avoid flooded streets, they said.

According to the IMD, the western suburb of Santacruz recorded 164.8 mm rain in six hours from 8.30 am to 2.30 pm, while Colaba in south Mumbai) recorded 32.2 mm rain during the same period.

"It's monsoon arrival in Mumbai today," Dr Jayanta Sarkar, head of the IMD's Mumbai office, said in the morning.

The IMD said conditions are favourable for onset of the monsoon in remaining parts of Maharashtra in next two to three days. 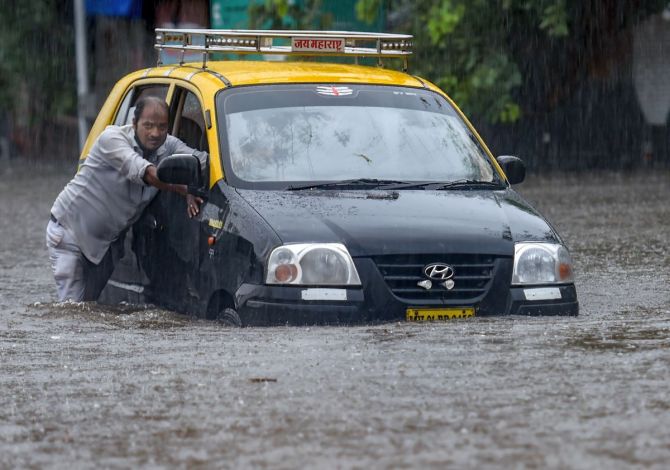 IMAGE: A taxi driver pushes his car as he tries to wade through a waterlogged street at Hindmata in Mumbai. Photograph: Shashank Parade/PTI Photo

There was inundation at several places in Mumbai, including on tracks near Sion and Chunabhatti stations on the Central Railway (CR) route.

The local train services were initially suspended on the CR's main line between CSMT and Kurla from 9.50 am.

"However, services on the Trans-Harbour line and BSU (Uran in adjoining Raigad district) lines are running smoothly. Also, shuttle services from Thane to Karjat/Kasara and Vashi-Panvel are operational," he said.

There was no disruption on the Western Railway route and its local train services were running normal, WR's chief spokesperson Sumit Thakur said.

Water pumps were being deployed to clear flooding, he said, adding drains and culverts were flowing smoothly. 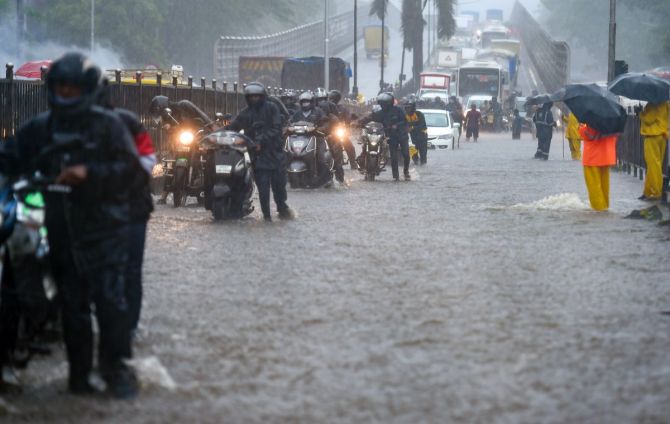 Maharashtra Chief Minister Uddhav Thackeray directed the administration to ensure the accumulated rainwater is drained out at the earliest and transport resumed.

Thackeray spoke to the control rooms in Mumbai and collectors of Thane, Raigad, Ratnagiri, Sindhudurg and Palghar districts as incessant rains led to the inundation of several areas, affecting the normal life.

The Chief Minister's Office (CMO) said the Met department has predicted medium to very heavy rains in the next three days.

'On Wednesday, the chief minister asked authorities to ensure that residents of the coastal belt are not inconvenienced and relief work be started wherever needed.

'The CM also told them to ensure that rains do not impact COVIID hospitals and also the patients being treated for other ailments.

'He directed authorities in Mumbai to keep the pumping stations functional to drain out rainwater expeditiously,' the CMO said.

Earlier in the day, the IMD issued a red alert for Mumbai, Palghar, Thane and Raigad districts, predicting 'thunderstorms accompanied with lightning/gusty winds and very heavy to extremely heavy rain at isolated place'.

The IMD also issued an orange alert for various districts in the Konkan region, including Mumbai, for next four days, barring Raigad for which there is red alert for Thursday and orange alert for the next three days. 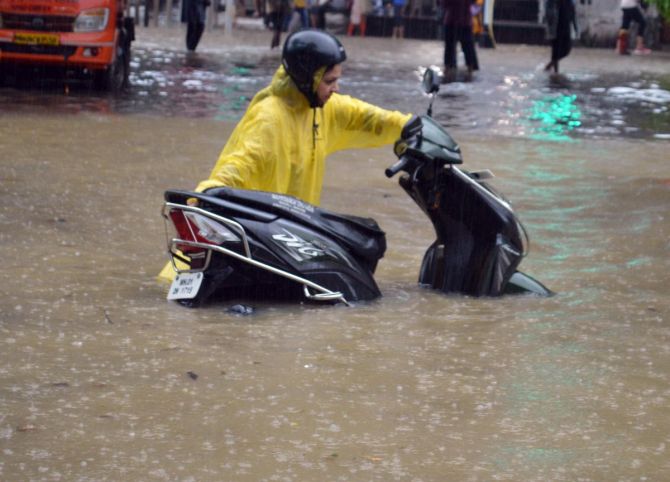 IMAGE: A woman pushes her bike as she tries to wade through a waterlogged street. Photograph: Sahil Salvi for Rediff.com

"Heavy to very heavy rain at isolated places," predicted in the districts on the Konkan belt during the orange alert days, the IMD said.

It also issued an orange alert for Pune, Satara and Kolhapur districts in western Maharashtra on Saturday and Sunday, and for Bhandara, Gondia and Gadchiroli districts in the Vidharbha region on Sunday.

The MeT department had on Saturday confirmed the arrival of the south-west monsoon in Maharashtra at Harnai in the coastal Ratnagiri district.

Shelar said the claim of the Shiv Sena-ruled BMC that 104 per cent work of cleaning nullahs, sewers and open drains has been completed before the monsoon has been exposed after heavy rains caused water-logging in various parts of the city and flooding on rail tracks.

Every year more than Rs 150 crore is allocated for cleaning of nullahs, sewers and open drains in the city, the former minister said.

However, an 'unholy nexus' between contractors, the ruling party and officers has led to 'looting' of Rs 1,000 crore from the civic exchequer in the last five years , he alleged.

"We have been demanding proof of silt taken out during the cleaning work, but the authorities have been backing contractors," he said. 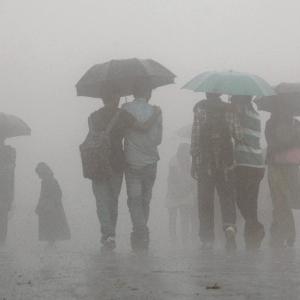