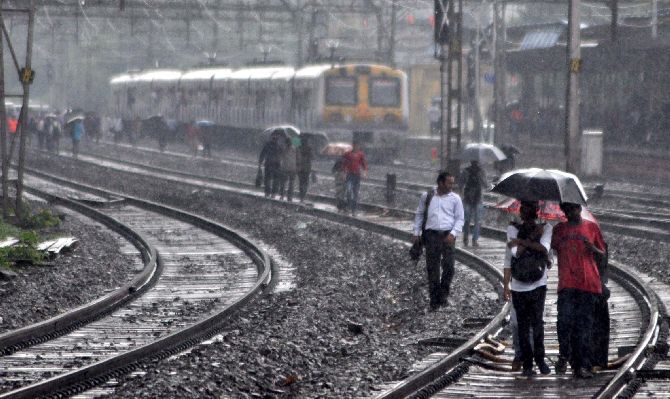 'At the first sign of rain, Mumbai's infrastructure begins crumbling.'
'The monsoon is the true test of the durability and effectiveness of any system.'
'What most don't realise is that the city is dead,' mourns N Suresh.

The arrival of the monsoon instantly gives us a true picture of Mumbai, India's so-called financial capital.

What most don't realise is that the city is dead. The monsoon is the true test of the durability and effectiveness of any system. Let us stop blaming the rain for all our troubles, including the drought or the collapse of Mumbai.

The Indian Railways is a central authority in a decentralised, state-driven country. So it is itself a contradiction of sorts. I remember how the formidable George Fernandes brought the railways to a crippling halt in 1974. Before every Railway Budget, Mumbaikars are on tenterhooks, hoping suburban rail fares won't be raised.

Passengers are told they are indebted to the central government for subsidised rail fares. The world over, public transport is subsidised and is expected to run at a loss. It is a public service, but because a facility is subsidised does not mean it has to lack in quality or that benchmarks have to be lowered.

Much worse, the authorities compromise on the public's safety.

Why is it that every single year, unfailingly, the authorities let down those very people who toil hard to sustain the city?

The less said about Mumbai's bus system, the better. Its very basic quality is way below the mark. It compromises on safety and puts the lives of commuters and road users at risk.

On watching the peak hour travelling conditions on Mumbai's trains at Churchgate station in 1996, James D Wolfensohn, the then World Bank chief, told a television channel that human beings here are treated like sardines. Had this occurred in Germany, its citizens would have rioted.

The lapse in security and the authorities' callous attitude in not providing foot overbridges, subways and other means of crossing the railway tracks means commuters' lives are always at risk. The wide gap between the trains and railway platforms have killed hundreds of commuters, low platforms have caused back injuries and crippled people.

It has taken countless public interest litigation from commuters and organisations to force the railways to provide minimum services. It has taken us 60 odd years to get a limited number of escalators at select Mumbai railway stations, instead of mass level implementation.

Security of women is also compromised. Women are still being thrown out of running suburban trains. Travelling at night is still unsafe for women and one is prepared for the worst.

The security is so compromised that the CCTV cameras/scanners at Mumbai's major railways stations have little or no impact. Most bags go unchecked and commuters are aware of the disaster looming over their heads.

The recent case of the theft of a battery from near Mahim station in north-central Mumbai crippled the entire railway system. That this is the third such theft in the area and in a metropolis like Mumbai should put the railway authorities to shame.

The authorities' attitude is piece-meal problem solving instead of realising that for the economy to run efficiently, the good health (physical and mental) of the millions of Mumbai's commuters is essential.

If commuters are given good services, their attitude too will change, their commitment levels increase and on a social and mass level there is a feeling of being accepted. 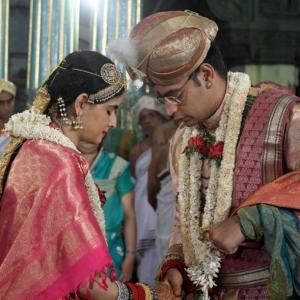