News
Business
Movies
Sports
Cricket
Get Ahead
Money Tips
Shopping
Sign in  |  Create a Rediffmail account
Rediff.com  » News » Will be great if Modi, Khan can 'work something' on Kashmir: Trump

Will be great if Modi, Khan can 'work something' on Kashmir: Trump

United States President Donald Trump said on Tuesday that it will be great if Prime Minister Narendra Modi and his Pakistani counterpart Imran Khan can "work out something" on Kashmir, distancing himself from any mediation between the two nuclear-armed neighbours. 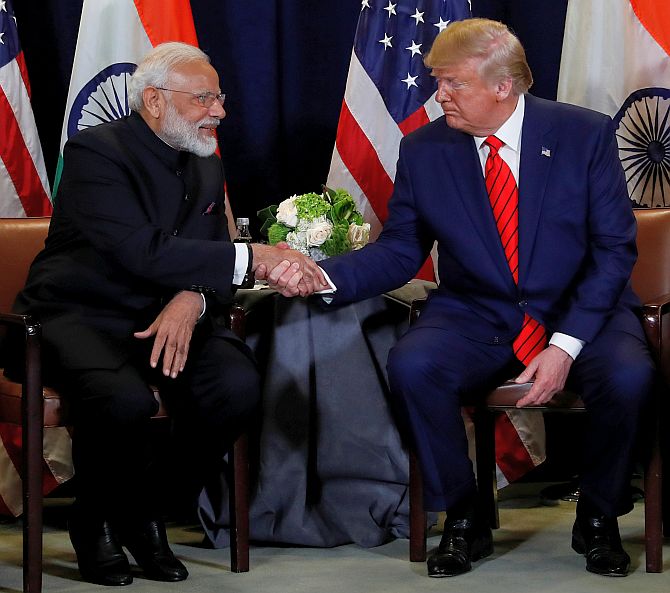 IMAGE: US President Donald Turmp meets Prime Minister Modi on the sidelines of the United Nations General Assembly session in New York -- their fourth meeting since Modi came to power for a second term in May this year. Photograph: Jonathan Ernst/Reuters

Trump made the remarks as he met Prime Minister Modi on the sidelines of the United Nations General Assembly session in New York -- their fourth meeting since Modi came to power for a second term in May this year.

"I really believe that Prime Minister Modi and Prime Minister Khan will get along when they get to know each other. I think a lot of good things will come from that meeting... It will be great if they can work out something on Kashmir," Trump said in response to a volley of questions.

His remarks came a day after he met Khan on Monday and once again offered to mediate between Pakistan and India on the Kashmir issue if both sides agree.

Tensions between India and Pakistan spiked after India abrogated provisions of Article 370 of the Constitution to revoke the special status of Jammu and Kashmir. 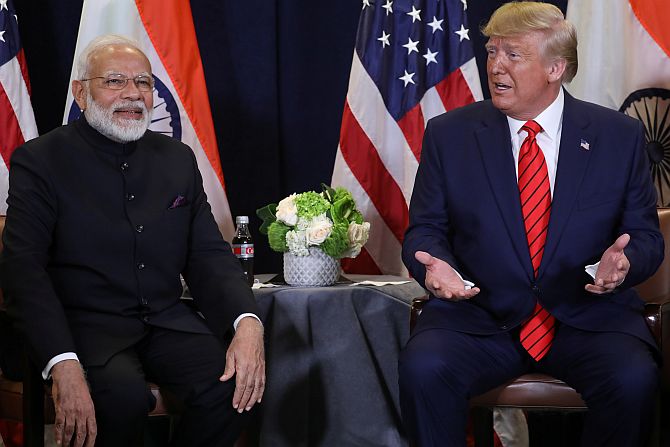 When asked about the terrorism emanating from the Pakistani soil and Pakistan Army's links to the militant groups, Trump said, "the Prime Minister (Modi) will take care of it".

"You have a great PM, he will solve all problem," Trump said, responding to another question from an Indian journalist.

Trump also said his country will soon have a trade deal with India to boost economic ties between the two nations.

"We are doing very well... I think very soon we will have a trade deal," Trump told reporters when asked if there is any trade deal is expected in the talks between India and the US.

WATCH: Trump says Modi may be the Father of India

The two countries are negotiating a trade package to iron out issues and promote the two-way commerce.

Their meeting comes two days after the two leaders met on Sunday in Houston and shared the stage at 'Howdy, Modi' gala event where they displayed a close friendship and a common vision on fighting terrorism.

Prime Minister Modi praised Trump as "a good friend of India" and expressed his happiness over the US President joining him at the 'Howdy, Modi' rally.

"I am thankful to Trump that he came to Houston. He is my friend but he is also a good friend of India," Modi said.

"They love this gentleman to my right. People went crazy, he is like an American version of Elvis," Trump said, referring to the 'Howdy, Modi' event.

Modi presented a framed photograph from the 'Howdy, Modi' event to US President Trump, who thanked him for the gesture. 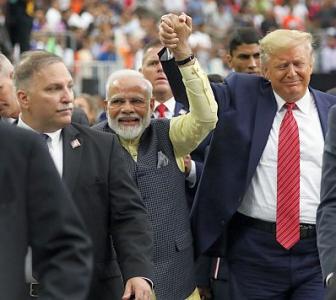 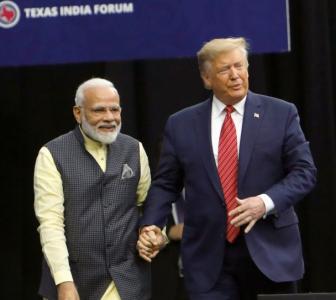