Launching his party's Lok Sabha poll campaign in three states, Prime Minister Narendra Modi on Thursday kept the focus on national security, terrorism and how his 'decisive' government showed the courage to conduct a surgical strike in all spheres -- land, sky and space. 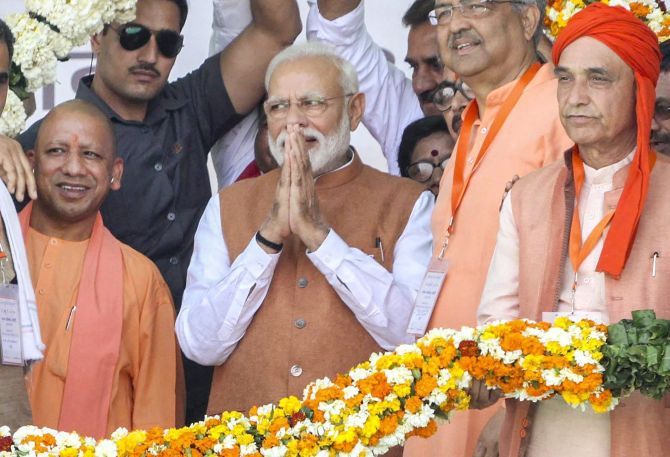 Modi addressed rallies in Meerut in Uttar Pradesh, Rudrapur in Uttarakhand and Akhnoor in Jammu and Kashmir--all part of Lok Sabha constituencies figuring in the first phase of the polls on April 11.

Modi also tore into the opposition parties by coining an acronym 'SaRaB' (alcohol) from the initial letters of the Samajwadi Party, Rashtriya Lok Dal and Bahujan Samaj Party alliance and urged people to 'stay away from SaRaB in the polls for the good health of Uttar Pradesh'.

The Urdu word for liquor is 'sharab'.

The remarks by Modi, who also termed the SP-RLD-BSP alliance in UP 'mahamilavat' (adulterated), drew a furious reaction from the Congress and the SP.

The Congress demanded an apology from Modi while SP chief Akhilesh Yadav accused him of spreading the 'intoxication of hatred', saying the prime minister didn't know the difference between 'sharab' and 'sarab' (mirage).

Continuing his attack on the Congress, Modi accused it of raising questions on the valour of the armed forces after the post-Uri surgical strikes in 2016 in Pakistan-occupied Kashmir and later the air strikes in Balakot inside Pakistan in February.

The contest is between a 'a decisive government and an indecisive past', Modi said at the Bharatiya Janata Party's Vijay Sankalp rally in the western UP town of Meerut, a day after announcing that India had demonstrated the anti-satellite missile capability by shooting down a live satellite to join an elite club of space super powers.

Calling himself the nation's 'chowkidar', Modi said, "It was this chowkidar's government that had the courage to conduct surgical strikes on land, sky and space. India should develop, India should be secure from enemies."

The country is, for the first time, witnessing a government that knows how to deliver, he said.

The prime minister, who launched the BJP's campaign from Meerut in 2014 too, said he will bring justice to all.

The contest this time will be between 'dumdaar BJP and daagdaar opposition', he said, driving home his point that his party is strong but opposition parties are tainted.

In his third rally of the day at Akhnoor in Jammu region near the Indo-Pak border, Modi said terrorists across the border are living in a state of fear.

In an apparent reference to the Balakot air strikes, Modi said those running the terrorist factory across the border are living under constant fear and the terrorists have been forced to think 100 times before sneaking into this side.

"Those running the terrorist factory across the border are afraid and are living under constant fear. This had happened for the first time that the terrorists are forced to think 100 times to intrude into this side to rattle India," Modi said at his first poll rally in Jammu and Kashmir.

Modi, who spoke in Dogri first and then switched over to Hindi, said when voters press the button of the electronic voting machine on April 11 and choose the lotus, it will not only unnerve the terrorists and their friends within the country but its bang would be heard across the border as well.

The prime minister also attacked Congress president Rahul Gandhi on his mocking tweet on Wednesday wishing him 'happy World Theatre Day' after his address to the nation announcing the success of the anti-satellite missile.

"You all saw how India created history yesterday by achieving a feat in space to ensure we emerge stronger globally and to ensure our safety. But see the kind of funny things people in the opposition have been saying."

"It is both worrying and funny... what do you say about someone who does not even know the difference between a theatre set and ASAT (anti-satellite)?" he said.

Playing on the words 'saboot' and 'sapoot', the Hindi words for proof and good son, Modi attacked the opposition for seeking evidence of the surgical strikes.

Alleging that the Congress's blood did not boil even after terrorists struck in the heart of Mumbai in 2008, Modi told a rally in Rudrapur that fear is something unknown to the 'chowkidar'.

"It is the Congress' job to cower in fear. The 'chowkidar' knows no fear. All he knows is put up a dour fight," he said.

In a blistering attack on the Congress for offering 'dole' to people for votes, he said the party gave the slogan of 'garibi hatao' decades ago and in this elections also it had nothing new to offer.

Alleging that the Congress was the very cause of poverty, he asked people to eliminate the party. "Remove the Congress and poverty will go away automatically."

"Will you send a party like this back to power?" he asked. 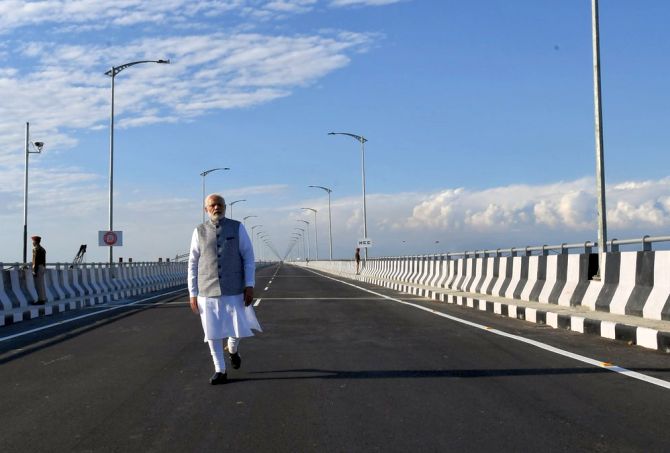