Meet the 3rd Indian-origin woman to go to space

After Kalpana Chawla and Sunita Williams, Sirisha Bandla will become the third Indian-origin woman to fly into space. 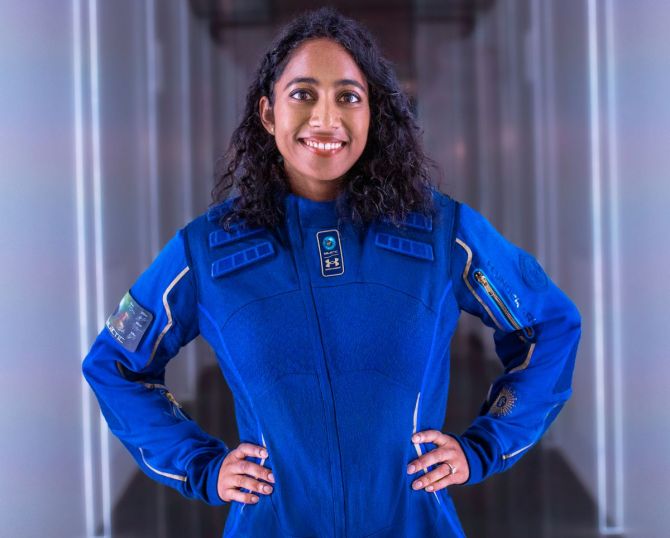 IMAGE: Sirisha will be astronaut no 004 and her flight role will be Researcher Experience. Photographs: Kind courtesy Virgin Galactic

Sirisha Bandla, a 34-year-old aeronautical engineer, is set to become the third Indian-origin woman to head to space when she flies as part of Virgin Galactic's first fully crewed flight test on Sunday.

Bandla, who was born in Guntur district in Andhra Pradesh and brought up in Houston, Texas, will join Sir Richard Branson, the company's billionaire founder, and five others on board Virgin Galactic's SpaceShipTwo Unity to make a journey to the edge of space from New Mexico.

Bandla will be astronaut no 004 and her flight role will be Researcher Experience, according to her profile on Virgin Galactic.

She will become the third Indian-origin woman to fly into space after Kalpana Chawla and Sunita Williams.

"When I first heard that I was getting this opportunity, it was just. I think that that probably captured it very well, I was speechless. This is an incredible opportunity to get people from different backgrounds, different geographies and different communities into space," she said in a video posted on Virgin Galactic Twitter on July 6.

Bandla, a Purdue University alumna, will be evaluating the human-tended research experience, using an experiment from the University of Florida that requires several handheld fixation tubes that will be activated at various points in the flight profile, a statement on the Galactic website said. 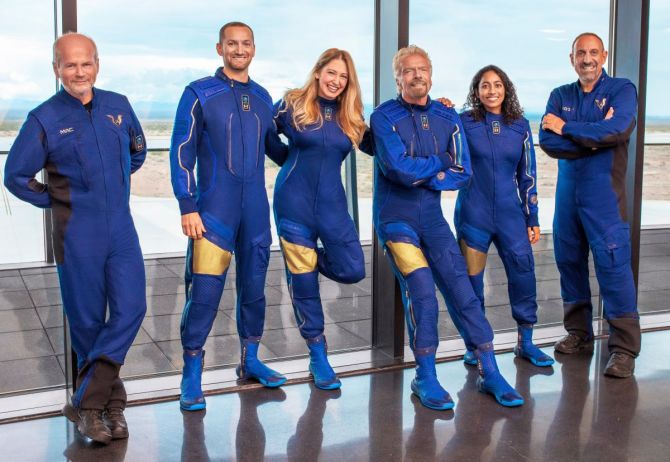 IMAGE: Sirisha with Sir Richard Branson and her other Unity22 crew members.

Bandla started in her role as the Vice President of Government Affairs and Research Operations at Virgin Galactic in January 2021, the university said in a statement.

Bandla grew up in Houston, near NASA's Johnson Space Center, and always wanted to become an astronaut. But poor eyesight meant she could not meet the requirements to become a pilot or an astronaut, derailing her high-school plan to go the Air Force-to-NASA route, she said in the statement.

"I've had fond memories of my time at Purdue,” Bandla said in 2021, “being part of a group of passionate individuals... Purdue built a strong foundation of technical and programmatic principles we all carried into our successful careers.

The flight window for the next rocket-powered test flight of its SpaceShipTwo Unity opens July 11, pending weather and technical checks, Galactic said in a statement.

The “Unity 22” mission will be the twenty-second flight test for VSS Unity and the company's fourth crewed spaceflight. It will also be the first to carry a full crew of two pilots and four mission specialists in the cabin, including the company's founder, Sir Branson, who will be testing the private astronaut experience, it said.

"I've always been a dreamer. My mum taught me to never give up and to reach for the stars. On July 11, it's time to turn that dream into a reality aboard the next @VirginGalatic spaceflight," Branson tweeted following the announcement on July 2.

Building on the success of the company's most recent spaceflight in May, Unity 22 will focus on cabin and customer experience objectives. 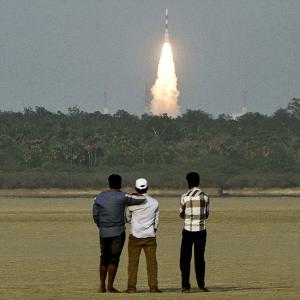