A massive fire engulfed a hotel in central Delhi's congested Karol Bagh area in the early hours of Tuesday, killing 17 people, including two people who jumped off the building in a desperate bid to save themselves, officials said. 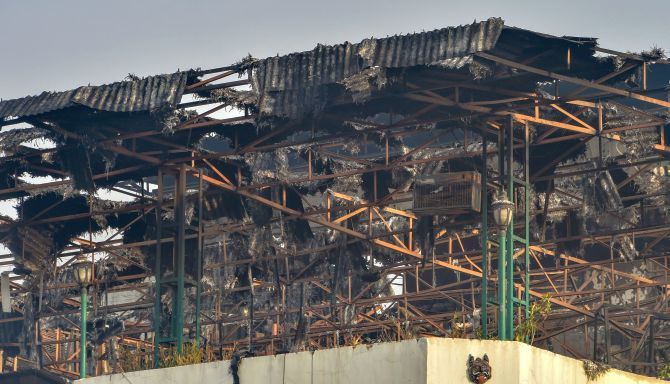 IMAGE: A view of charred remains on the rooftop of Karol Bagh's Hotel Arpit Palace where a massive fire broke out, in New Delhi. Photograph: Shahbaz Khan/PTI Photo

Two staffers of hotel Arpit Palace also died. Kumar and the hotel cook, Tara Chand, jumped off the building in a desperate bid to escape but died.

A 33-year-old Myanmar national, Chan Chan, also jumped off the over 25-year-old structure but survived with a fracture in her leg.

Prime facie, the cause of the fire was suspected to be a short-circuit, the police and fire officials said.

According to hospital authorities at least four others were injured. However, the police said only one other person was injured.

The police said that out of 17 people killed, 15 have been identified. Autopsy was conducted on five bodies which were handed over to their families. Initially, the fire officials said a child had died in the blaze but later the police said it was the body of an adult male victim which had charred and shrunk beyond recognition. 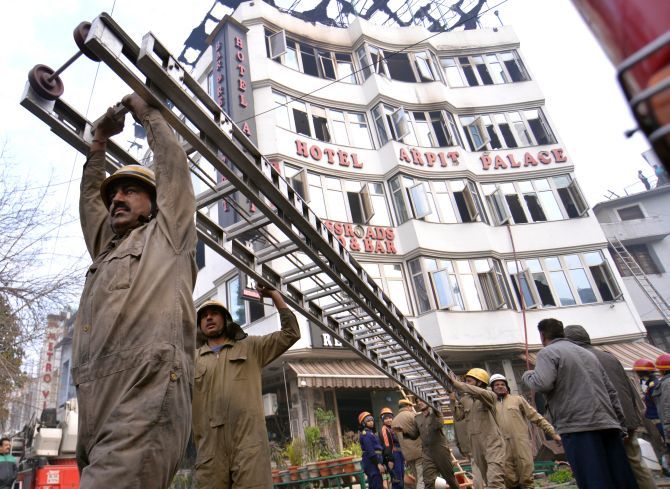 According to a statement issued by the Kerala government, three of the deceased belonged to the state and three others were from Tamil Nadu.

The police said one victim belonged to Gujarat.

In a late evening development, the police arrested hotel's general manager Rajender and manager Vikas on the charges of culpable homicide not amounting to murder.

"A case has been registered against the two and the hotel owner who is absconding since the incident," DCP (Central) Mandeep Singh Randhawa told reporters.

According to the fire department, they received a call at around 4.35 am about the incident following which 24 fire tenders were rushed to the spot.

It took nearly four hours for them to douse the fire that had swept through all the floors of the five-storey building which had a terrace kitchen in violation of rules. Flames resurfaced by noon, but were later doused.

Dilip Trivedi, 58, a resident of Ahmedabad who came to Delhi for a business deal, had a miraculous escape.

"At around 4 am, I heard cries of people shouting for help. When I opened my door, I saw very dense smoke in the corridor area. Then I took my bag and rushed downstairs," said Trivedi who was occupying a room on the first floor of the hotel. Bhupendra Rajput, an eyewitness who helped in rescue operation, said, "We were inside my room at a hotel nearby the incident happened. People were shouting for help and we immediately rushed to the spot."

Different agencies pointed out several violations on the part of the hotel's management, including closure of the emergency exit gates at the time of fire, which trapped the victims inside the establishment.

The hotel was first granted a licence in October 2005 and was renewed every year. The last renewal was done on May 25, 2018 and was valid till March 31, said an official of North Delhi Municipal Corporation. 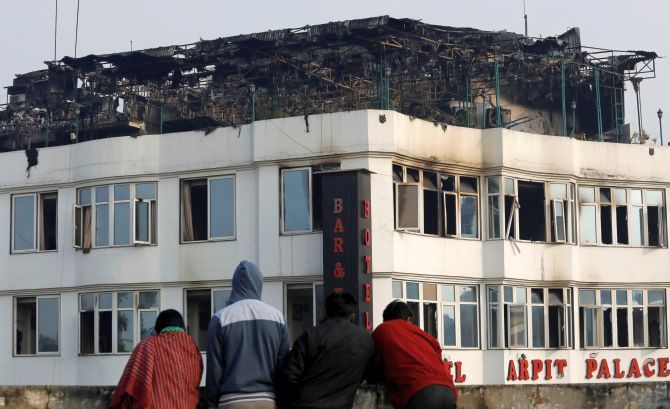 IMAGE: According to eyewitnesses, most deaths were caused due to suffocation. Photograph: Anushree Fadnavis/Reuters

"The stamped happened as the stairs were narrow. We pulled them out and helped clear the way for other," Rajput said.

The roads were blocked near the spot due to which the fire tenders took time to reach there. The first tender that reached the spot did not have adequate water. If that fire tender had enough water, it would have taken less time to control it, Rajput added. 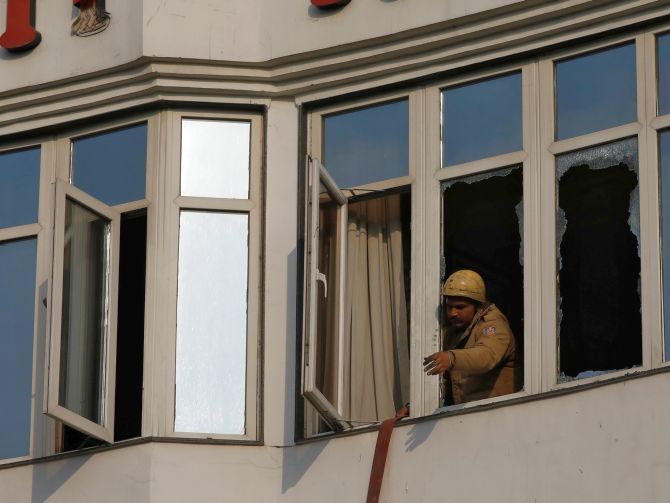 IMAGE: A fireman looks out of a window of the hotel where a fire broke out in New Delhi. Photograph: Anushree Fadnavis/Reuters

According to Alphons, the emergency exit of the hotel was 'too narrow' and also locked.

The Delhi government ordered a magisterial probe into the incident and announced Rs 5 lakh for the next of those killed in the fire. 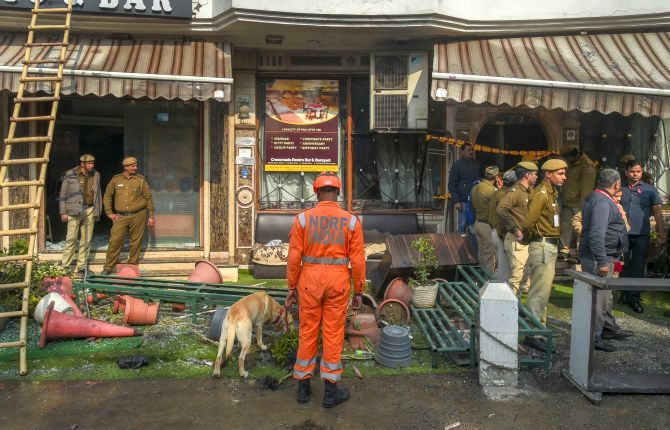 Following the incident, the Aam Aadmi Party government also cancelled an event that was to be held on Tuesday to mark the fourth anniversary of the AAP dispensation.

'Deeply saddened by the loss of lives due to a fire at Karol Bagh in Delhi. I convey my condolences to the families of those who lost their lives,' he tweeted.

The hotel had a canopy on its terrace with chairs and tables laid out, indicating that there was an open restaurant operating there, fire officials said, adding that there was wooden panelling in the rooms that could have helped the fire spread.

It was a nightmare without end, said Somshekhar, who had come to Delhi from Kerala with his family to attend a wedding Ghaziabad and was staying in the hotel.

He lost three members of his family. They were residents of Ernakulam district in Kerala and were getting ready to go to Haridwar when the fire started.

"Ten of us were rescued by police and fire teams. We had booked four rooms in the hotel. We were all ready early morning to go to Haridwar when suddenly there was a power cut. They switched on the generator and there was a heavy smoke," he said. 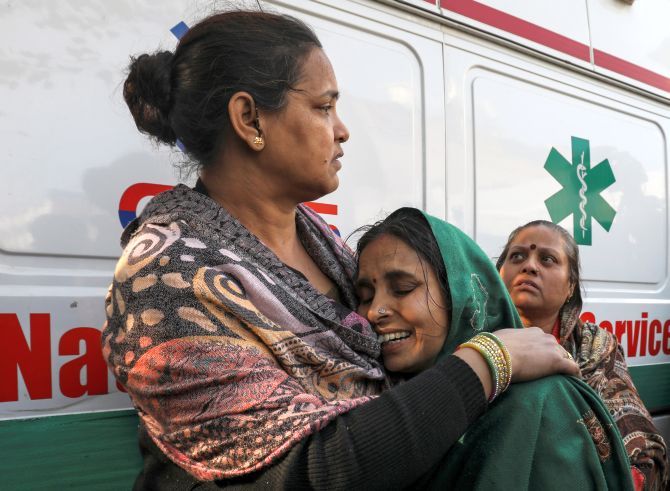 IMAGE: A woman cries as she cannot find her relative who was staying in the hotel where the fire broke out. Photograph: Anushree Fadnavis/Reuters

His sister Jayashree alerted them to the smoke and rushed out to check what was happening, he said. She was later found dead. 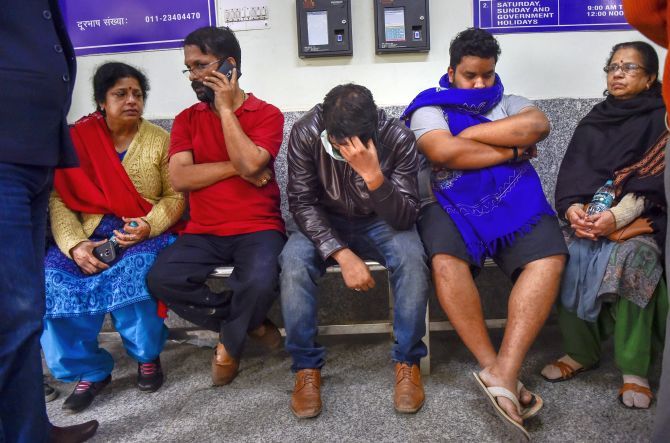 "The entire pathway was full of smoke. My mother and brother were along with my sister at the time.

"I immediately came to the room and opened the room for fresh air and we managed to escape. We were at the second floor of the hotel," he said. 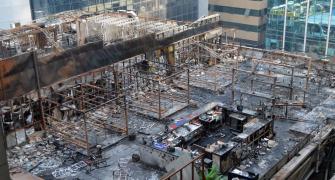 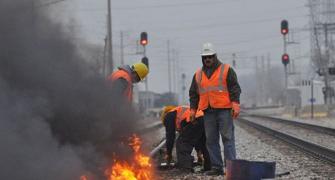 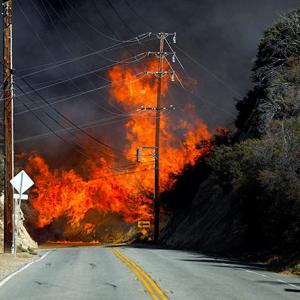