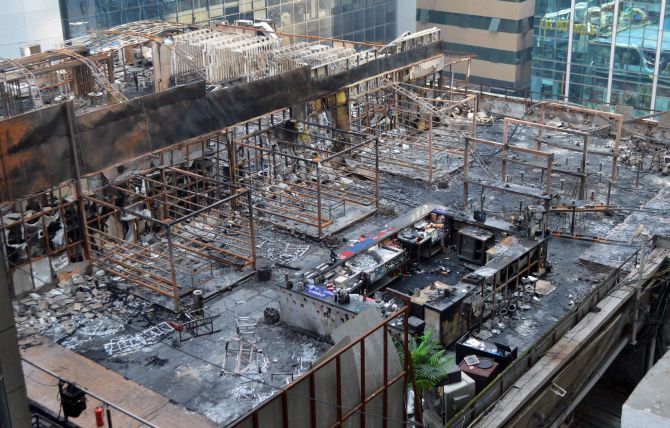 IMAGE: Visuals of the gutted '1 Above' restaurant a day after the massive blaze at Kamala Mills complex in Mumbai's Lower Parel area. Photograph: Sahil Salvi

The Friday fire at Kamala Mills in Lower Parel area of central Mumbai has made Vinayak Sawant, a 42-year-old executive in a private firm operating out of this complex, a worried man.

"I wonder how would fire engines enter the complex if anything happens during peak hours, as roads have bumper to bumper traffic," said Sawant.

For about a century, central Mumbai’s Parel and Elphinston area was best known for textile mills. They started the transformation into a commercial and F&B hub in the past one-and-half decade.

While the major chunk of the 900-acre mill land in this area gave rise to skyscraper office complexes and posh restaurants, the century-old infrastructure, good enough to take only a few thousand cars per day, didn’t get an upgrade.

Though Kamala Mills based in the area is not counted among grade-A office complexes, the number of restaurants and pubs here nearly doubled in the past one year to over 35.

Niranjan Hiranandani, chairman at Hiranandani Communities, wondered why one office complex had 35 restaurants, while places such as Nariman Point and Ballard Estate in south Mumbai don’t have many.

"More areas should be opened up for restaurants to avoid congestion in one area," he said.

Sakshi Sakhlani, who works for a PR firm in the same area, rejoiced when her office shifted from Nariman Point to Lower Parel. But the joy was short lived.

It takes her 15 minutes to climb up and down the stairs at the Parel station, where the September 29 stampede killed at least 22 people.

Besides, she has to spend another 15 minutes to stand in the queue to get in a cab to reach her office.

"Though my train travel has reduced, new problems cropped up after we shifted to Lower Parel," Sakhlani said.

Sawant and Sakhlani are not isolated cases. It is the same challenge for many who commute to Lower Parel for work.

According to estimates, the total office space in the mill land of this area was less than 3 million sq ft in 2005.

Property consultant JLL expects the total office space would go up to 16 million sq ft by 2021.

"There is no place to walk on the roads. Cars are parked. I do not know how fire engines will move in case of an emergency," said Raja Seetharaman, director at Propstack, a property data analytics firm.

Chandrashekhar Prabhu, a housing activist, said, “When the mill-land were allowed to be redeveloped into commercial complexes, the authorities didn’t visualise its impact on the city’s infrastructure. No studies were done before granting permissions.”

Prabhu has written several letters to the government on the issue but no action has been taken.

"Suddenly, 900 acres was foisted on the city. It is like putting 500 kg bag on the back of a 90-year-old. Large disasters are waiting to happen," he said. 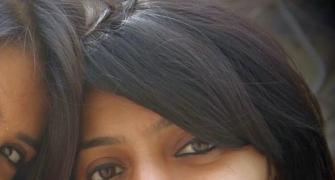 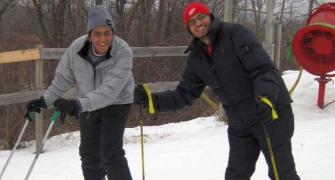 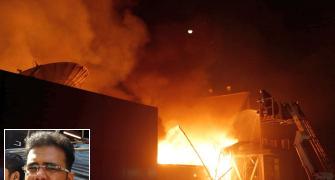