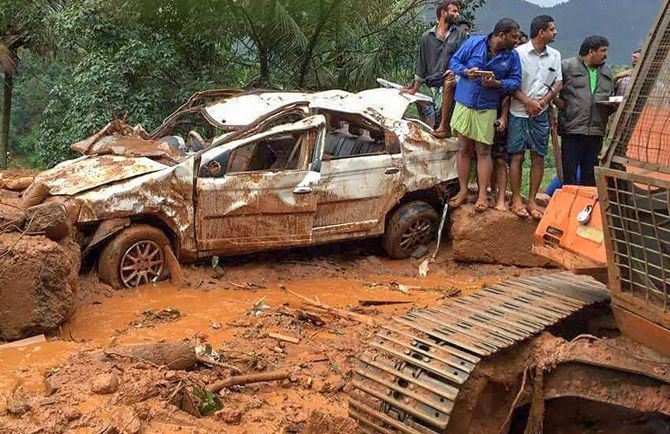 The Indian Army and National Disaster Response Force have been deployed in affected areas in Idukki, Kozhikode, Waynad and Malappuram districts to assist the civil administration in the rescue operations, officials said.

State Disaster Control Room sources said 26 people have died in rain-related incidents since Wednesday with 17 of them being killed in landslides in Idukki and Malapuram districts. 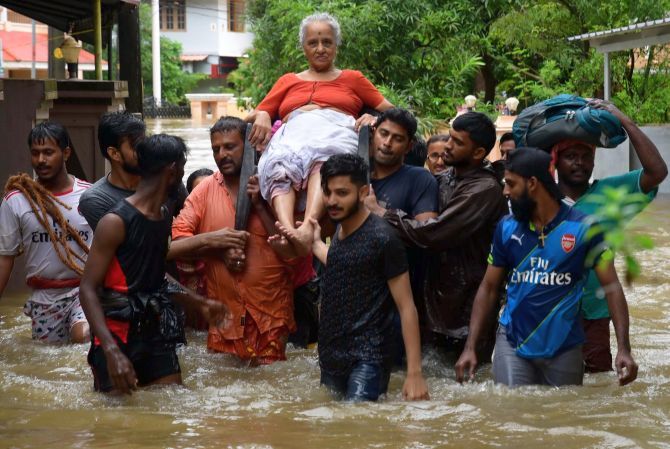 With several rivers in spate following the incessant rains, as many as 24 dams in different parts of the state have been opened in an ‘unprecedented’ development.

A red alert has been sounded ahead of the impending release of water from the Idukki Reservoir, the largest arch dam in Asia.

More than 10,000 people have been shifted to 157 relief camps across the state in the last two days, the government said.

It has asked tourists not to go to high range areas and dam sites in the state. 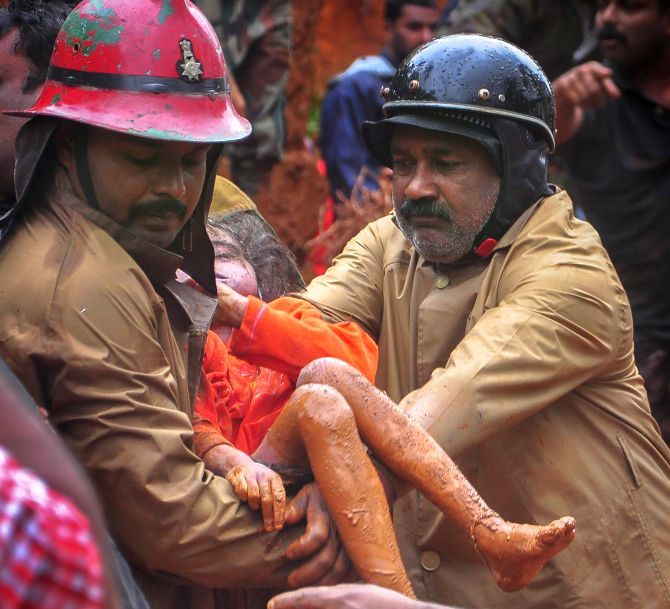 The incessant rains also disrupted landing operations at the international airport in Kochi for nearly two hours in view of the possible inundation in the airport area following a rising water level in the Periyar river, flowing nearby.

The arrival operations were resumed from 3.05 pm on Thursday evening, a spokesperson of the airport said. 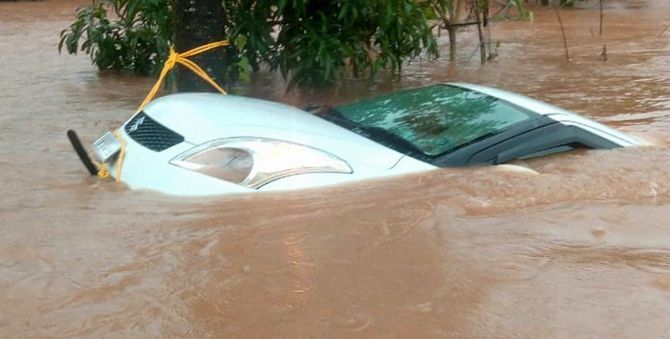 IMAGE: A car is seen submerged in flood water after heavy rainfall, at Vythiri in Wayanad district of Kerala. Photograph: PTI Photo

The Kerala State Electricity Board, which maintains the Idukki dam, issued the red alert saying the shutters of the reservoir would be opened at 6 am on Friday and asked people living downstream to be “extremely vigilant”.

Talking to reporters after a review meeting, the chief minister said the flood situation was “very grim” and it was for the first time in the history of the state that 24 dams have been opened at a time following the water level reaching their respective maximum.

“Twenty four dams have been opened so far which is unprecedented and is telling of the seriousness of the situation. People living in downstream areas of these dams
must be cautious,” a tweet by the Chief Minister’s Office said later. 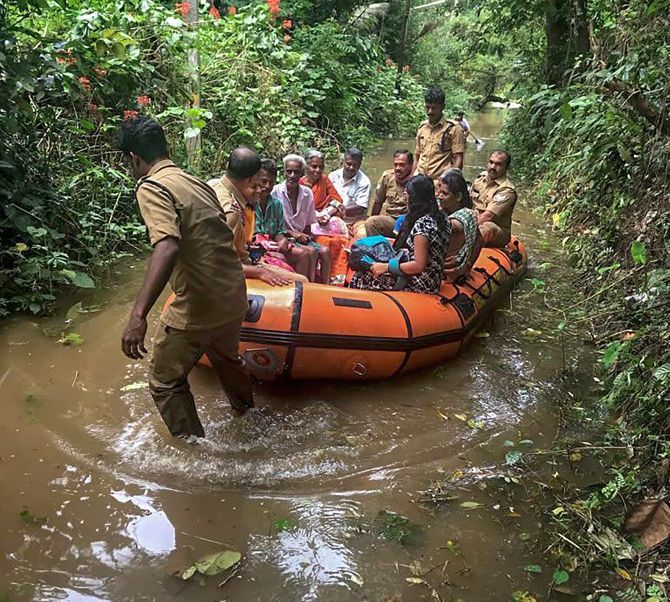 According to the Indian Meteorological Department, the South west monsoon has been vigorous over Kerala with Nilambur in Malappuram district receiving “exceptionally heavy rainfall”of 40 cm and Mananthavadyin Waynad 31 cm in the last 24 hours ending 8 am on Thursday. A red alert has been sound in Waynad district, which has received 39.87 cm rains in the last two days, causing severe
damage, according to district administration sources.

The Cheruthoni Dam, part of Idukki reservoir, the largest arch dam in Asia was opened after 26 years.

The water level in the Idukki dam stood at 2,399.58 feet (in relation to mean sea level) at 4.30 pm on Thursday against the full reservoir level of 2,403 feet, prompting the authorities to issue the red alert, officials said.

Water from the dam would be let into Cheruthoni and Periyar rivers. 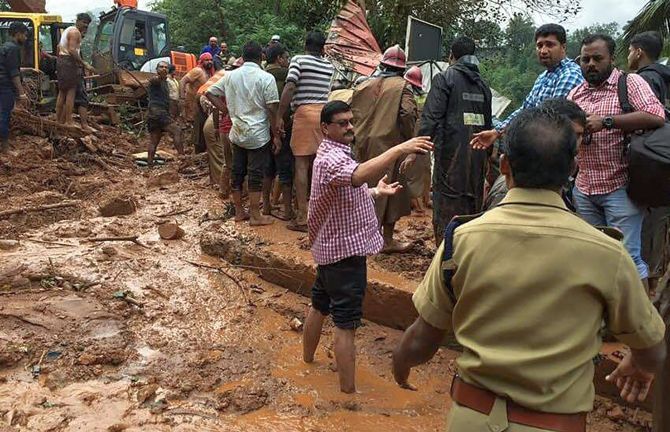 The casualty in Idukki district included five members of a family in Adimali town.

Two persons were pulled out alive from the debris by the locals and police in a nearby town, they said. 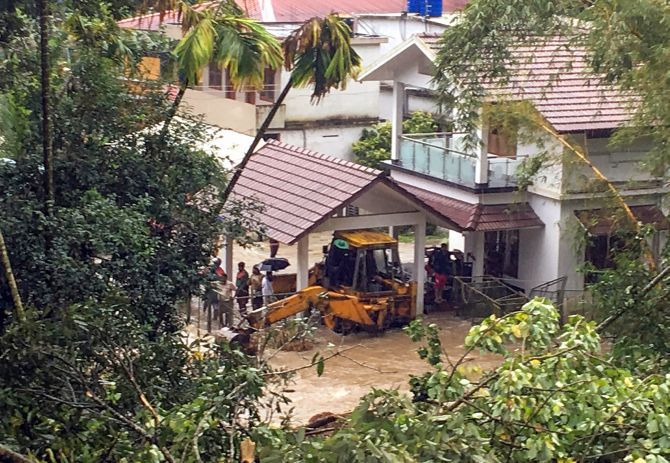 Vijayan said the annual Nehru Trophy boat race, scheduled to be held at PunnamadaLake in Alappuzha district on August 11, has been postponed due to floods.

“There is a possibility of water level increasing in Kuttanad in the district in the event of the Kakki reservoir lifting shutters. So, the boat race has been postponed. The new date will be announced later,” he said.

“The flood has caused large-scale damage across the state. Water levels in rivers are on the rise. Thus, there is a need to open the shutters of many dams,” the chief minister said. 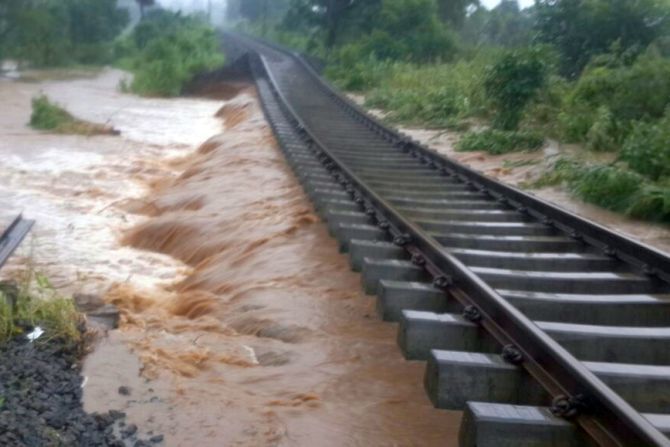 IMAGE: Heavy rain and subsequent waterflow damaged a section of the track (B-line) between Kanjikode and Walayar. Photograph: ANI

A 24x7 monitoring cell has been set up at the Secretariat to co-ordinate the relief works with various district collectors.

Ernakulam District administration officials said over 2,300 people living on the banks of Periyar river have been shifted to 38 camps opened in view of rising water level following release of water from Cheruthoni and Idamalayar dams. 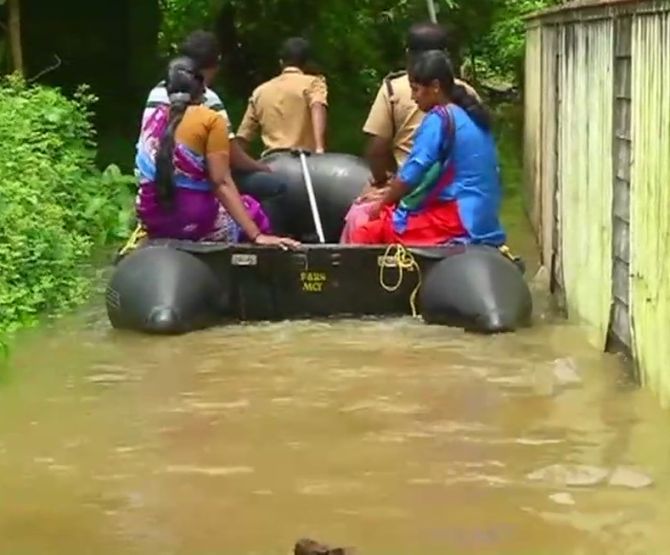 IMAGE: Shutters of at least 22 reservoirs in the state have been opened to drain out excess water. Photograph: ANI

Members of the central team, who are in the state to assess the damage caused by the rains since the onset of the monsoon on May 29, held a meeting with the chief minister on Thursday morning.

Vijayan said the state would submit a detailed memorandum to the Centre seeking financial assistance for taking up relief works. 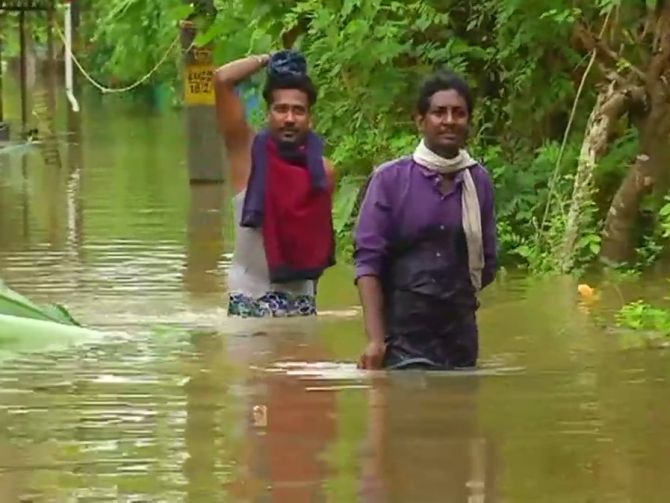 IMAGE: The flood has caused large-scale damage across the state. Photograph: ANI

The monsoon has so far claimed over 175 lives, besides causing destruction to crops and dwellings, officials said.

PM speaks with Kerala CM, offers assistance to those affected

IMAGE: A view of houses submerged in water following a flash flood, triggered by heavy rains, at Palakkad in Kerala. Photograph: PTI Photo

Prime Minister Narendra Modi spoke with Kerala Chief Minister Pinarayi Vijayan in the wake of heavy rains and floods in the state, and offered all possible assistance to those affected.

“Spoke to Kerala CM Shri Pinarayi Vijayan and discussed the situation arising due to floods in various parts of the state. Offered all possible assistance to those affected. We stand shoulder to shoulder with the people of Kerala in the wake of this calamity,” the PM said in a tweet. 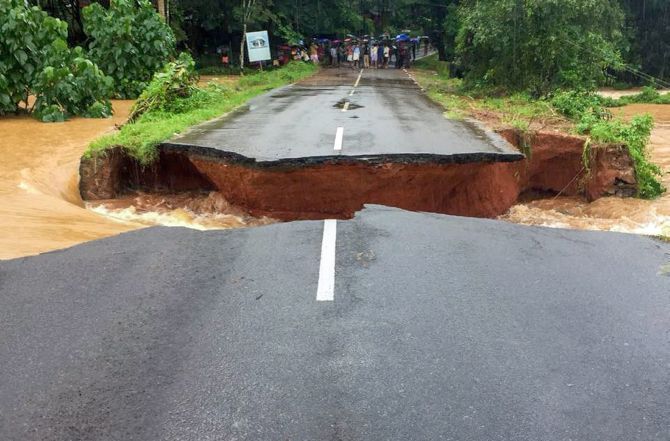 IMAGE: A section of Nilambur- Karad road is seen washed away following a flash flood, triggered by heavy rains, at Malappuram in Kerala. Photograph: PTI Photo

Minister of State for Tourism K J Alphons told the media earlier in the day that personnel from the army, the navy and air force will reach Kerala shortly to assist in the rescue and relief operations.

An inter-ministerial team of the central government is also visiting the flood-affected areas in Kerala, while army troops are being mobilised from Bengaluru for deployment in the rain-battered southern state. 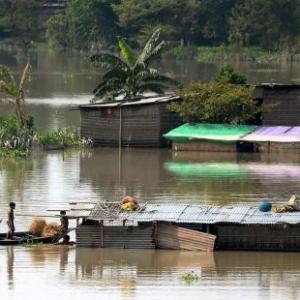