Investigators on Saturday recovered the Digital Flight Data Recorder and Cockpit Voice Recorder, also called the black box, from the ill-fated Boeing 737 that could provide vital clues in the crash of the Air India Express flight in heavy rain in Kozhikode as the toll rose to 18 with a passenger succumbing to injuries. 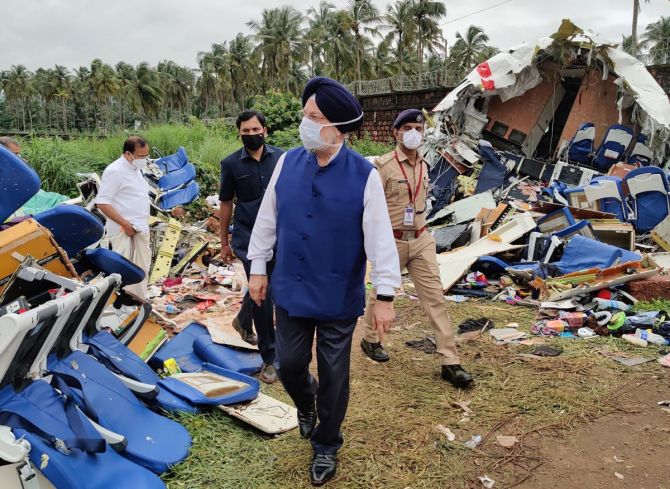 The AIE flight(IX-1344) from Dubai with 190 people on board including a 6-member crew overshot the table-top runway on Friday night while landing at the international airport in Karipur, about 30 km from Kozhikode, in neighbouring Malappuram district and fell into a valley 35 feet below and broke into two portions.

Of the 149 people who are injured and are in various hospitals, 23 of them are in critical condition while another 23 have been discharged after initial medical assistance, an official said.

An official of aviation regulator DGCA said the DFDR and the CVR will be taken to Delhi for further investigations by the AAIB. 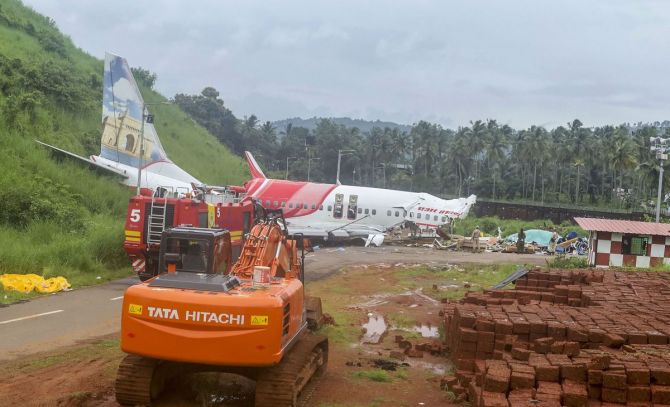 The CVR keeps a recording of all the conversations that takes place in a plane's cockpit and along with DFDR that has a record of flight data such as airspeed, altitude and fuel flow can help in finding out the cause of the crash, the official said.

The aircraft's pilot Captain Deepak Vasant Sathe, 58, and co-pilot Captain Akhilesh Kumar, 32, were among the dead.

Puri, who rushed to Kozhikode, told reporters that Sathe, a former Wing Commander of the Indian Air Force (IAF), was one of the most experienced commanders with more than 10,000 flying hours and had landed aircraft 27 times at the Karipur airport including this year. Kumar had a total flying experience of 1,723 hours.

All the four cabin crew on board are safe, an official said. 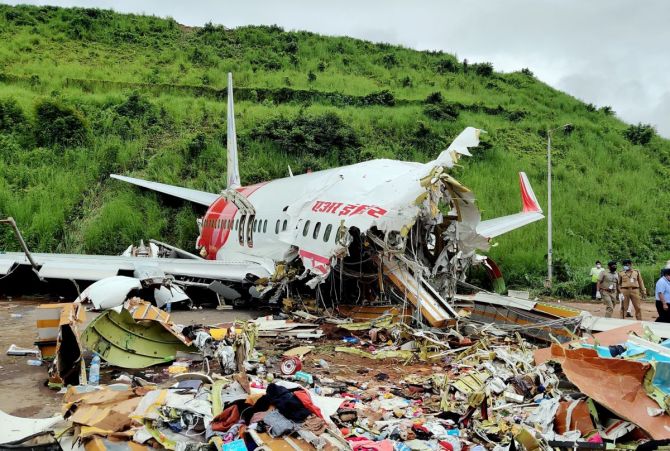 The flight was part of the Centre's 'Vande Bharat' Mission to bring back Indians stranded abroad in the coronavirus pandemic.

As investigators carried out the probe, an AAI spokesperson said runway 28 was in use and in the first landing attempt the pilot could not sight the runway and requested for runway 10. 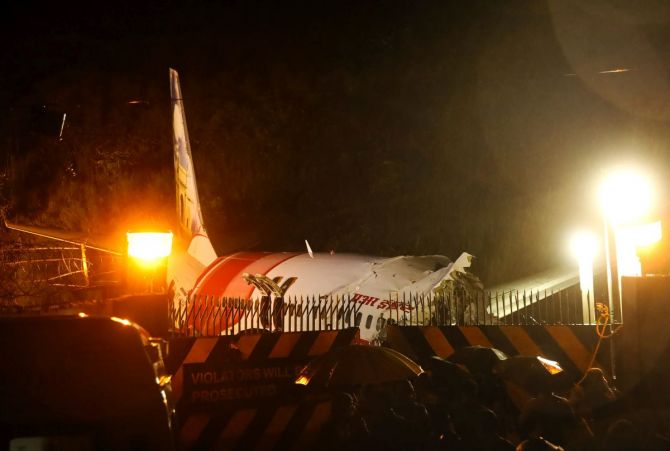 IMAGE: The black box of the ill-fated flight was recovered on Saturday. Photograph: PTI Photo

Aviation safety expert Captain Ranganathan, who had earlier flagged concerns about Kozhikode airport runway, said the DGCA should not allow landing of flights during monsoon on runway 10 at the aerodrome.

"Death due to an accident is something which happens when you don't know but when you knew the danger existed and you were warned about it and you took no action and an accident takes place, then it is definitely murder," Ranganathan told PTI.

In 2011, he had warned that flights landing on runway 10 in tailwind conditions in rain at the Kozhikode airport endanger the lives of people onboard those flights. 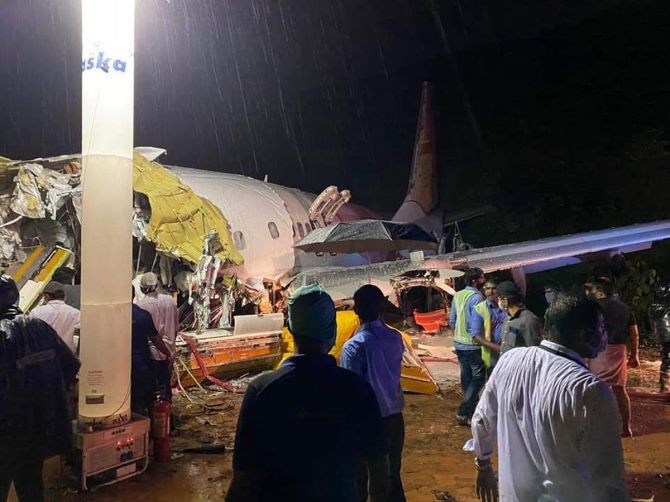 While the toll was put at 17 on Friday, it rose to 18 with the death of one more person, Malappuram District Collector K Gopalakrishnan said.

According to the official list released by him, four of the deceased were children -- three girls and a one-year old boy -- and seven men and an equal number of women. Two girls were aged two and the other was five.

"Currently, 149 people are in various hospitals of Malappuram and Kozhikode, out of which 23 are in critical condition. Earlier, 23 were discharged after being provided initial medical assistance," Chief Minister Pinarayi Vijayan said. 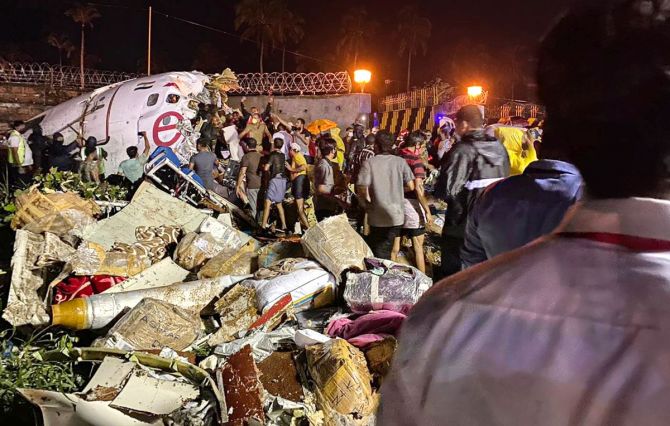 IMAGE: The civil aviation minister announced Rs 10 lakh interim relief for each of the deceased, Rs 2 lakh for the seriously injured and Rs 50,000 for those who suffered minor injuries. Photograph: PTI Photo

Minister Puri announced Rs 10 lakh interim relief for the kin of each of the deceased, Rs 2 lakh for the seriously injured and Rs 50,000 for those who suffered minor injuries.

The Kerala government said Rs 10 lakh each would be given as compensation to the families of the deceased. The medical expenses of those under treatment will be borne by the government, Vijayan told reporters.

The chief minister along with state Governor Arif Mohammad Khan visited the injured at the Kozhikode Medical College hospital.

Amid the tragedy, coroanvirus scare too surfaced with samples of a passenger who died in the mishap testing positive for the pathogen while state Health Minister K K Shailaja asked all those engaged in rescue operations to go on self-quarantine and get themselves tested.

Vijayan, who held a high-level meeting here in which Governor Khan also participated, told reporters that all the crash victims would be tested for COVID-19. "So far, only one victim has tested positive for coronavirus," he said.

IMAGE: The pilot of the flight -- IX-1344 -- could not sight the table-top runway in the first landing attempt due to heavy rains. Photograph: PTI Photo

Puri, responding to queries from reporters on the cause of the accident, appealed to the media not to speculate as all the data required for the probe will be in the black box, and the cause of the contributing factors for the mishap will be revealed through the enquiry.

Earlier, Puri along with his ministerial colleague V Muraleedharan visited the accident site.

Muraleedharan, Minister of State for External Affairs, arrived in Kozhikode on Saturday morning from New Delhi on the directive of Prime Minister Narendra Modi and was briefed by officials of Air India and AAI, which operates the Karipur airport.

The airline also said three relief flights had been arranged to assist passengers and their family members affected in the accident that also brought back memories of the crash of Air India Express flight IX 812 on May 22, 2010 at Mangaluru International Airport.

IMAGE: Rescue operations were completed around midnight and airport operations resumed at 3 am on Saturday morning. Photograph: PTI Photo

As top officials rushed here for investigations, it emerged the aviation regulator had issued a show-cause notice to the director of the Kozhikode airport on July 11 last year after it found "various critical safety lapses".

The DCGA had pointed to cracks on the runway, water stagnation and excessive rubber deposits among other lapses in its show-cause notice, an official said. IMAGE: The Boeing 737-800 aircraft while landing overshot the runway and went down 35 feet into a slope before breaking up into two pieces. Photograph: PTI Photo

It had conducted the inspection after an Air India Express flight coming from Dammam in Saudi Arabia had a "tail strike" while landing at the airport here on July 2 last year, the official said.

Air India also tweeted that its Chairman and Managing Director Rajiv Bansal, and Air India Express Chief Executive Officer K Shyam Sundar and others 'rushed' to the accident site 'to take stock of the situation and are being briefed by experts'. 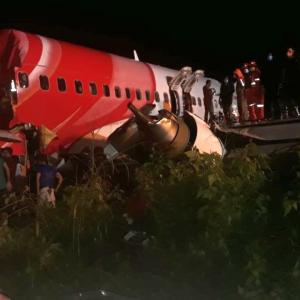 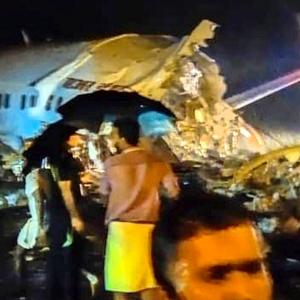