Speaker Ramesh Kumar said the motion of confidence would reach finality on Monday and it would not be prolonged further under any circumstances, to which the government agreed. Tottering on the brink collapse, the Janata Dal-Secular-Congress coalition government in Karnataka on Friday ignored the Governor's deadline twice for proving the majority on the floor of the state assembly, setting off a constitutional crisis and a fresh legal battle.

As the assembly failed to take up the voting on the confidence motion to decide the fate of the 14-month-old government, the unending political drama sparked by the resignation of 15 MLAs of the ruling coalition a fortnight ago is set to spill over to next week with Speaker K R Ramesh Kumar adjourning the House till Monday.

All eyes are now on Governor Vajubhai Vala on his next course of action.

Before adjourning the house towards the fag end of the day, the Speaker made it clear that a finality would be put to the motion of confidence moved by Chief Minister H D Kumaraswamy on Monday and the matter would not be prolonged further under any circumstances, to which the government agreed. Kumaraswamy and the Congress moved the Supreme Court accusing the governor of interfering with the assembly proceedings when the debate on the trust vote was underway and sought clarification on its July 17 order causing hindrance in issuing whip to the legislators.

The court had held that the MLAs cannot be compelled to participate in the assembly proceedings.

In his second missive to Kumaraswamy, the governor expressed his "prima facie satisfaction" that the government has lost its majority confidence of the house.

"When the allegations of horse-trading are widely made and I am receiving many complaints, it is constitutionally imperative that the floor test be completed without any delay and today itself.

"I, therefore, require you to prove your majority and complete and conclude the floor test procedure today," Vala told Kumaraswamy in the second letter since Thursday.

The governor said he was receiving various reports about the attempts being made for horse-trading.

"This can be averted only if the exercise of conducting the floor test is conducted at the earliest and without any delay," the governor said. 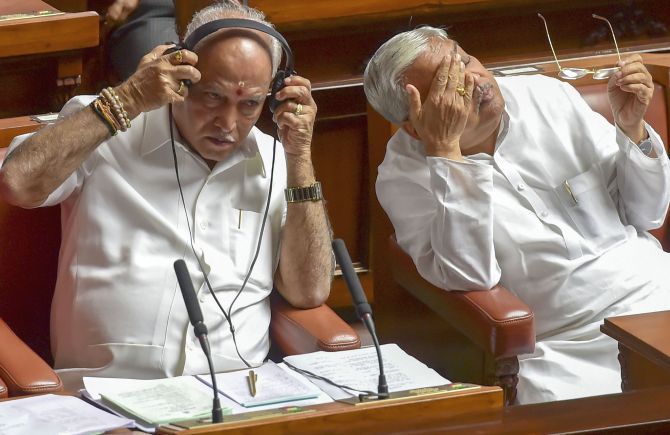 As he was speaking on the confidence motion, Kumaraswamy said, "I have received the second love letter" from the governor. He has got 'gnanodaya' (awareness) now. Governor talks about horse-trading in the letter... was he not aware of it till now."

"Let us do politics...we are also here...we will not fear and run away. Why couldn't the governor see horse-trading when the MLAs were resigning."

Governor Vala fixed a second deadline asking the chief minister to complete the floor test shortly after the 1.30 pm deadline set on Thursday night for the JD-S leader to prove his majority ended without the assembly taking up voting.

The House was also locked in an intense debate on when the trust vote process should be completed.

"Lot of discussion has happened; I want to close it (trust motion process) today," the speaker said.

"Caesar's wife should be above suspicion; I cannot be guilty of dragging proceedings."

Kumaraswamy said, "I have made preliminary submission; we can conclude (the process) on Monday." The ruling coalition appeared to be in no hurry to face the trust vote with Congress Legislature Partyleader Siddaramaiah earlier in the day saying the debate may go on till Monday after which the voting would take place since many MLAs have given their names to participate in the debate.

As the deadline neared, the ruling coalition members vociferously questioned the governor's power to issue such a direction with Kumaraswamy citing a Supreme Court verdict that a governor cannot act as ombudsman of the legislature.

Kumaraswamy said he would not criticise the governor and requested the speaker to decide whether the governor can set a deadline.

Allegations of bribery flew thick and fast as the debate progressed with the ruling coalition ministers and members targeting the BJP for its alleged toppling game.

"Legislators were offered Rs 40-50 crore to lure them; whose money is it?" asked Kumaraswamy, hitting out at the BJP even as the opposition members remained unruffled apparently to ensure there was no disorder that would disturb voting.

JD-S MLA Srinivas Gowda alleged he was offered Rs 5 crore bribe by BJP to defect to bring down the government.

Minister Sa Ra Mahesh alleged Vishwanath (JD-S former state president) had told him that he needs money as he has election-related loan of Rs 28 crore.

Krishna Byre Gowda alleged hundreds of crores of were being pumped in to bring down the government. 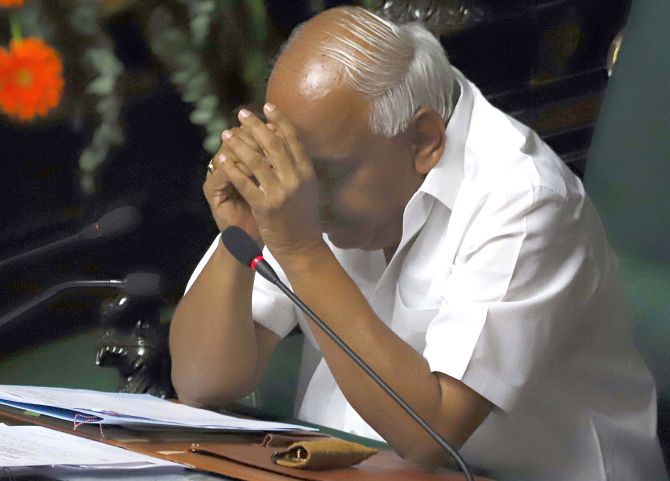 In his speech, Kumaraswamy accused BJP of resorting to ways to circumvent the anti-defection law.

He asked BJP why it is in a hurry to end the trust vote debate in one day if it was sure of its numbers.

"Why is the BJP in a hurry, if they have the numbers... why the hurry to end the debate in one day.... I know it is not easy to get your MLAs," Kumaraswamy said looking towards Yeddyurappa.

As the clock in the assembly struck 1.30 pm, the BJP insisted on a division on the confidence motion moved by Kumaraswamy Thursday in accordance with the letter by the governor sent to him.

As many as 16 MLAs -- 13 from the Congress and three from JD-S -- had resigned, while independent MLAs R Shankar and H Nagesh have withdrawn their support to the coalition government, putting the government on the edge.

If the resignations of 15 MLAs (12 from Congress and 3 from JDS) are accepted or if they stay away, the ruling coalition's tally will plummet to 101, (excluding the Speaker) reducing the government to a minority.