As hostilities between Israel and Palestine continue to escalate, rocket sirens are going off across southern and central Israel while dozens of explosions have also been reported. 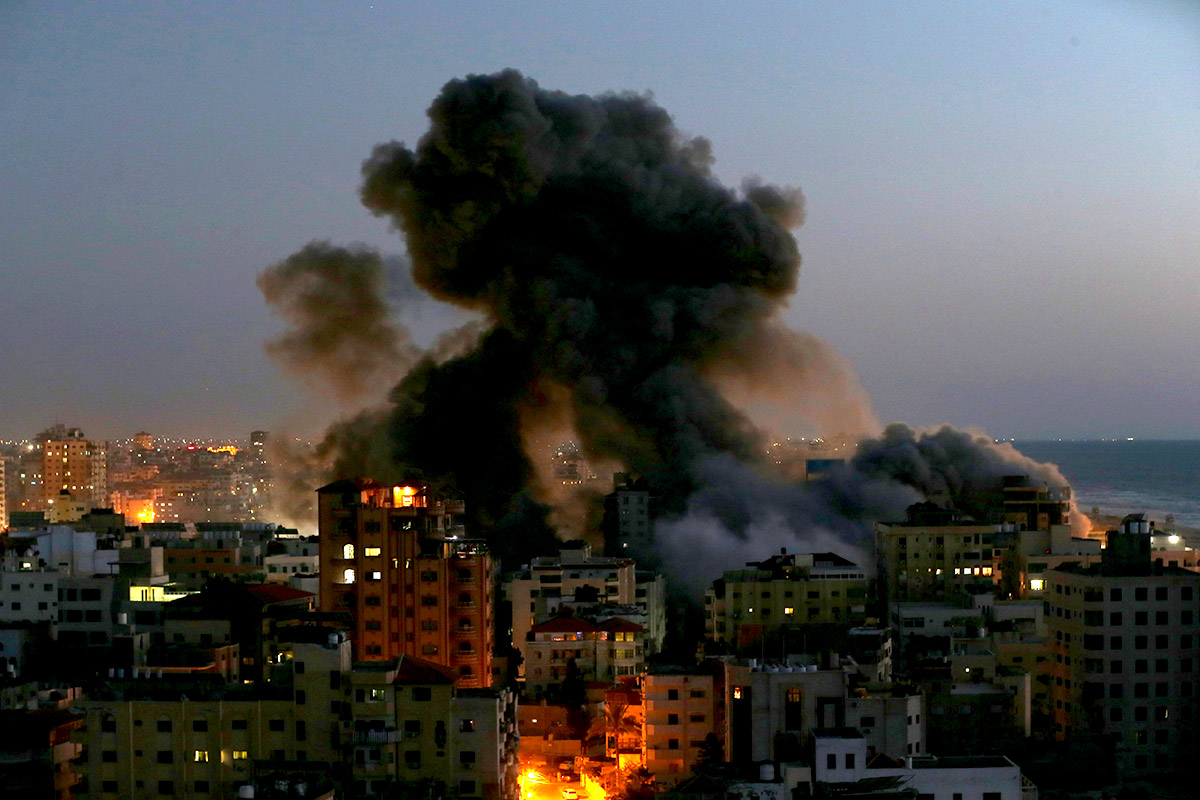 IMAGE: Smoke rises from a building after it was destroyed by Israeli air strikes amid a flare-up of Israeli-Palestinian violence in Gaza. Photograph: Ibraheem Abu Mustafa/Reuters

The health ministry run by the Hamas group reported that so far, 32 Palestinians have been killed and 220 people injured in Israeli airstrikes in Gaza since the outbreak of hostilities, The Times of Israel reported.

Meanwhile, sirens went off in communities near Gaza, in Beersheba where dozens of explosions were reported.

Loud booms were reported near Tel Aviv as Hamas launched a massive barrage of rockets at the city.

Amid the escalating conflict, the Hamas' military wing said it has launched 110 rockets at the city and at the nearby Ben Gurion airport. 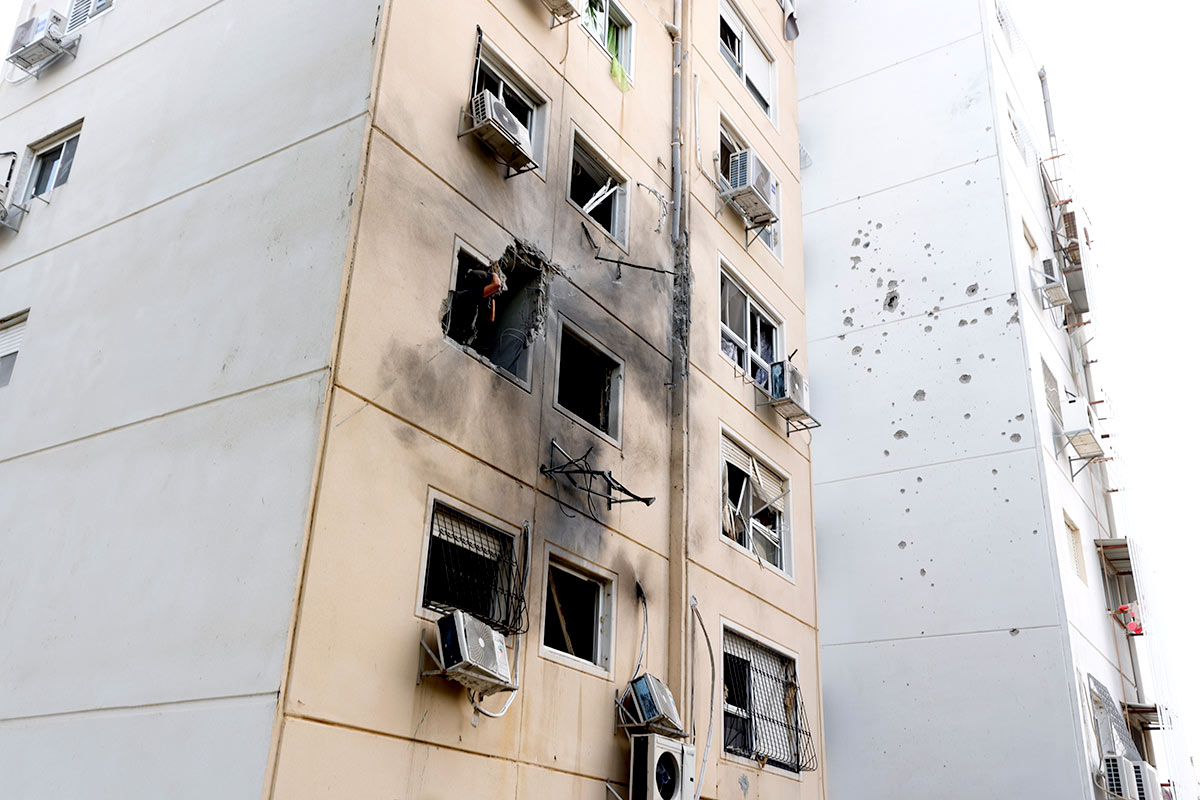 IMAGE: An Israeli police bomb disposal expert looks out from the window of a residential building that was damaged after it was hit by a rocket launched from the Gaza Strip in Ashkelon, southern Israel. Photograph: Amir Cohen/Reuters

Two people were seriously injured when a rocket hit their home in the city of Lod.

The house has been completely destroyed while the wounded have been shifted to a hospital. 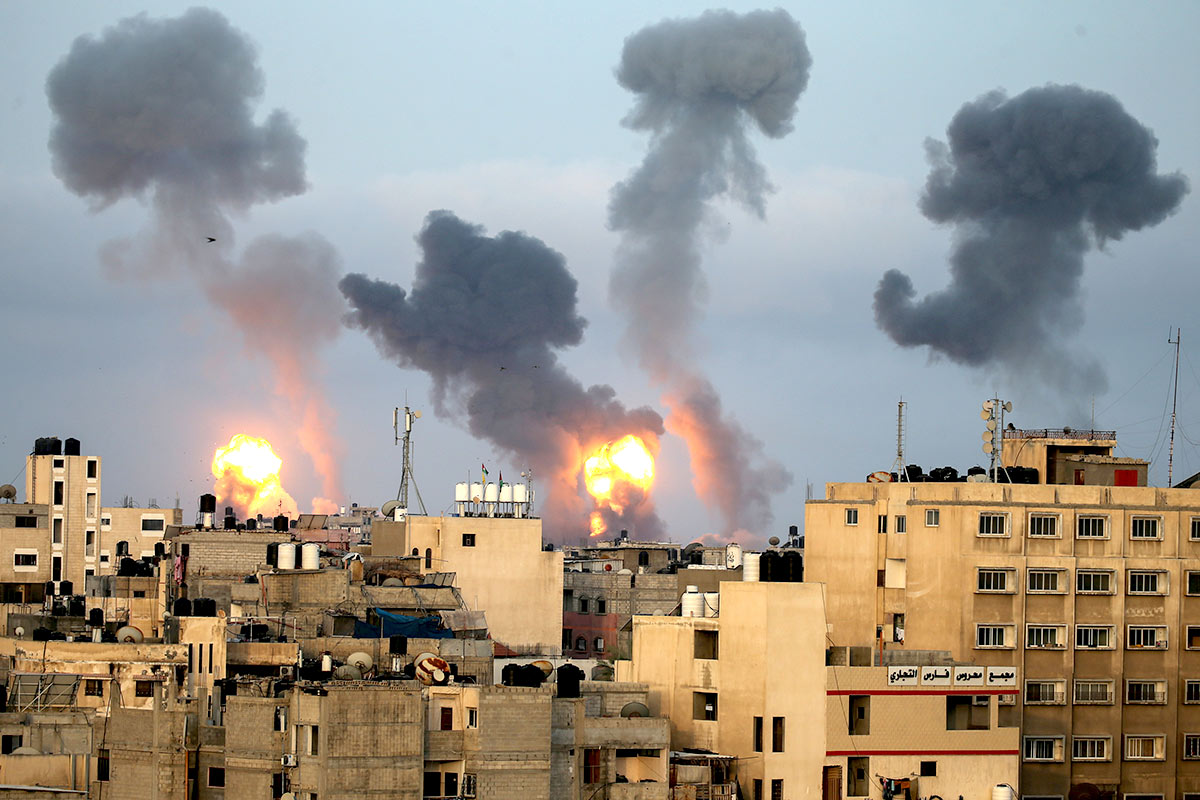 On the other hand, the Israel Defence Forces said it has attacked "a number of significant terror sites and terrorists across the Gaza Strip", reported The Times of Israel.

"It is 3 am and more rockets are being fired at Tel Aviv. Families are being woken up and rushed to bomb shelters," it tweeted. 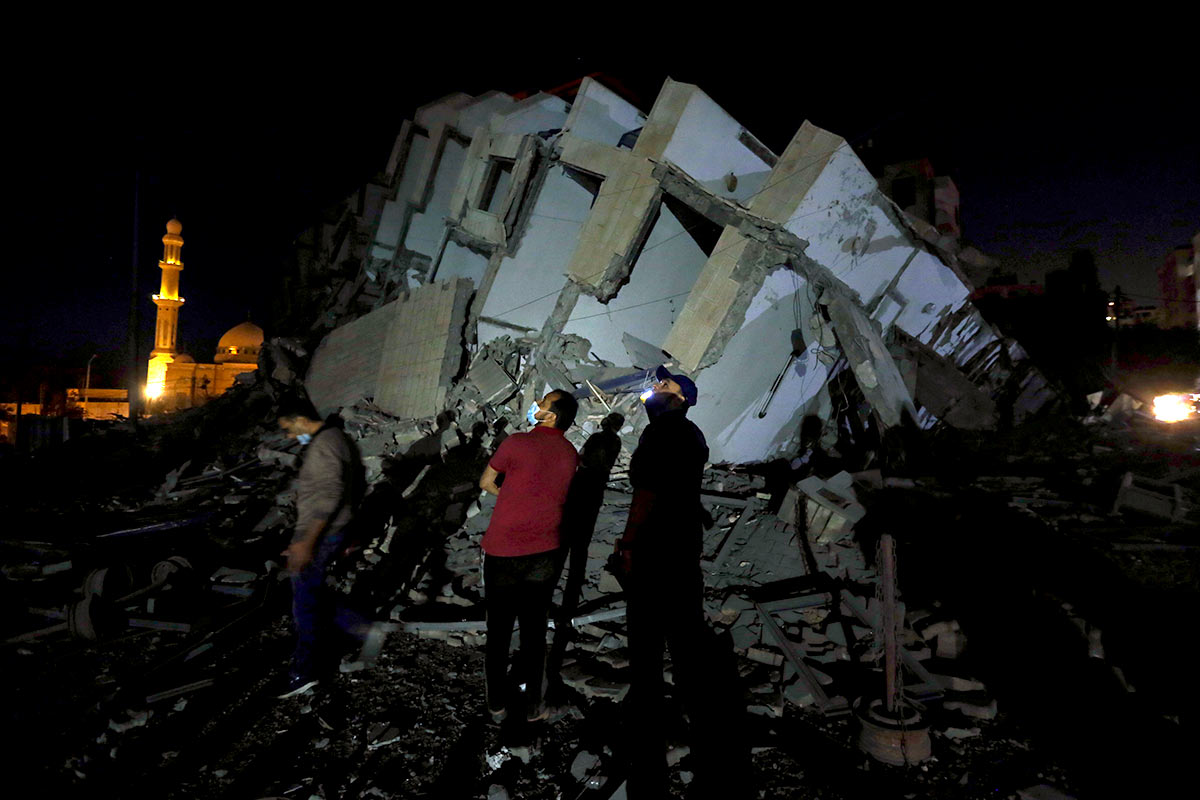 IMAGE: Palestinians look on as they stand at the site where a building was destroyed by Israeli air strikes amid a flare-up of Israeli-Palestinian violence in Gaza City. Photograph: Ibraheem Abu Mustafa/Reuters

Israeli Prime Minister Benjamin Netanyahu, who declared a state of emergency in Lod as intense rioting has erupted in the Arab-Jewish city, is set to visit the area after midnight (local time).

"I have been receiving updates all day on what is happening here in the city and I view it extremely gravely. It is anarchy from rioters that we cannot accept," he said, while promising to restore law and order. The Assaf Harofeh hospital said it is treating 12 people wounded in the clashes in Lod, including two in serious condition, The Times of Israel reported. 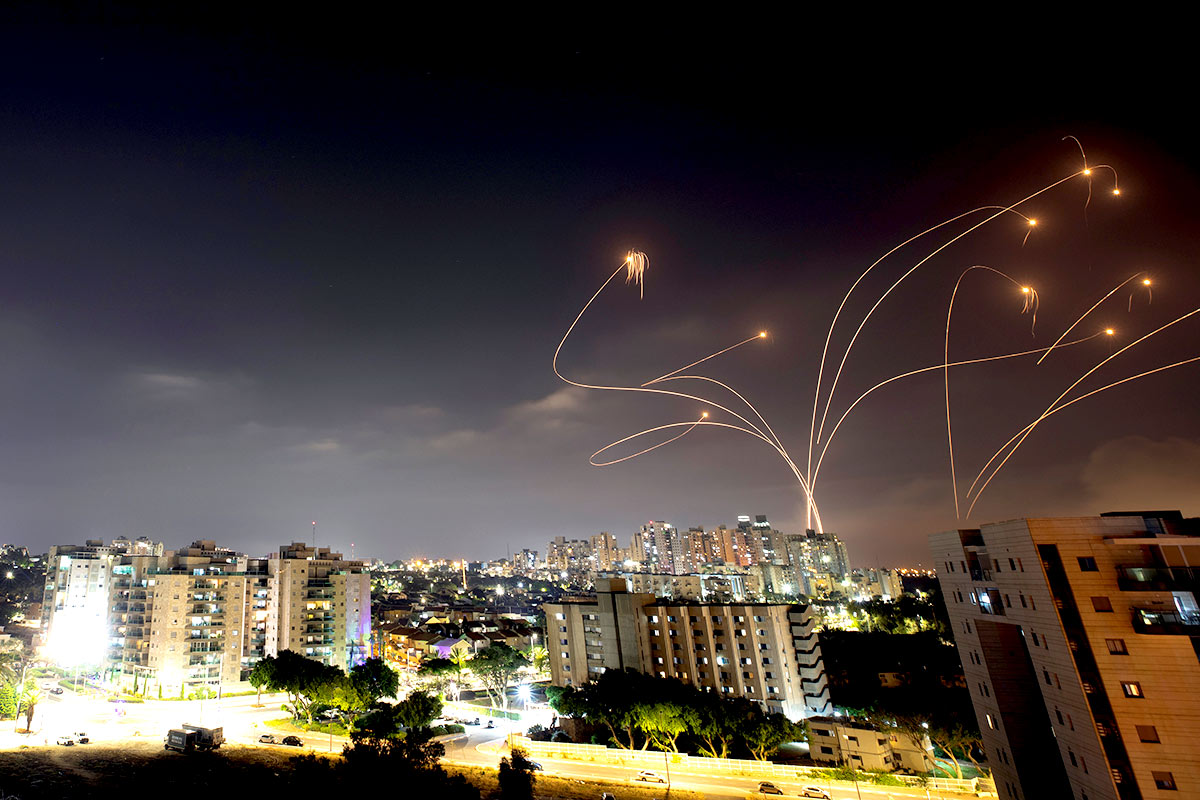 This comes as the tensions between Israel and Palestine are rapidly escalating, with ramping up of rocket attacks and airstrikes from both sides.

Three people have been killed in rocket strikes from Gaza towards Tel Aviv.

The United States has expressed serious concern over the ongoing conflict between Israel and Palestine, calling for de-escalation of tensions between both countries by establishing a two-state solution. 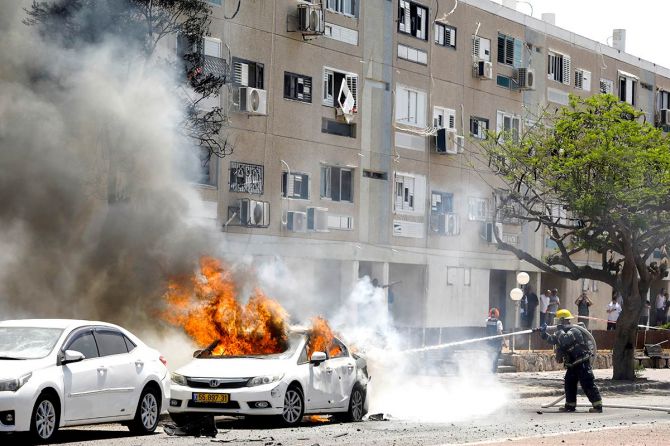 IMAGE: Israeli firefighters extinguish a car which caught on fire after a rocket was launched from the Gaza Strip in Ashkelon. Photograph: Nir Elias/Reuters

Over 630 rockets were fired at Israel from Monday evening through Tuesday afternoon, 200 of which were intercepted by Iron Dome missile defence batteries while 150 others fell short of their targets and landed inside the Strip, according to the army.

The country has been embroiled in conflict over the impending eviction of dozens of Palestinians from East Jerusalem's neighbourhood. 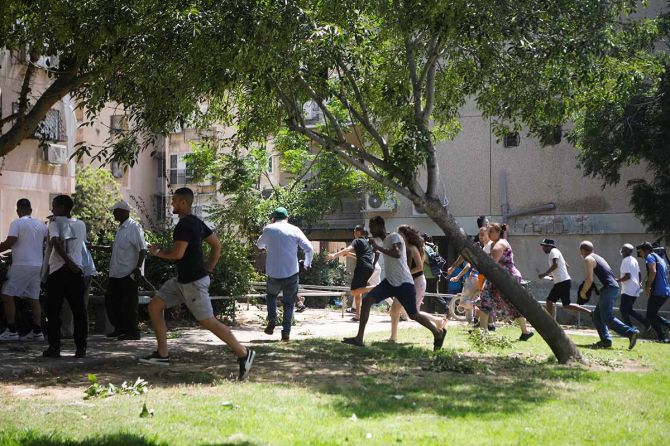 Over 70 Palestinians in total are set to be evicted from Sheikh Jarrah in the coming weeks to be replaced by right-wing Jewish Israelis.

The Palestinians live in houses built on land that courts have ruled were owned by Jewish religious associations before the establishment of Israel in 1948. 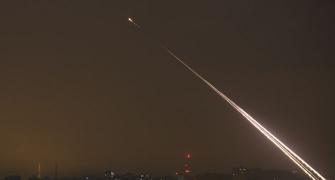 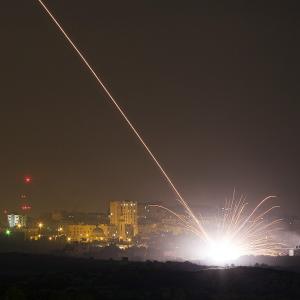 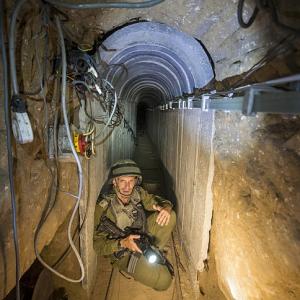