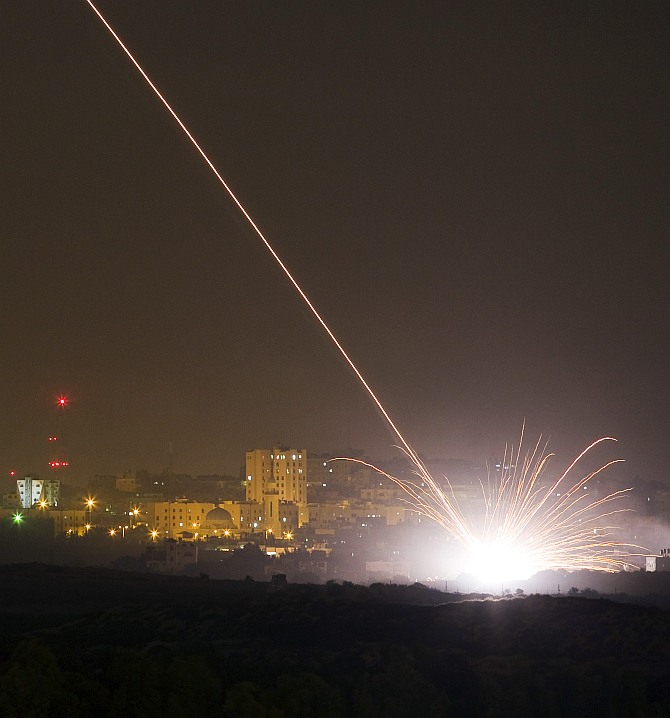 Israel has launched its first massive ground offensive in the Hamas-ruled Gaza Strip in five years, after 10 days of bombardment from the air and sea killed nearly 260 Palestinians but failed to stop the militants' rocket attacks on the Jewish state.

In a dramatic escalation of the conflict, Israeli forces backed by artillery and air strikes launched the ground offensive on Thursday night with the army saying the objective is to strike a "significant blow to Hamas' terror infrastructure."

Hamas, which has controlled the densely populated coastal Strip area since June 2007 after ousting rival Fatah in a bloody battle, warned that Israel would pay a "high price" for the ground incursion.

"Following 10 days of Hamas attacks by land, air and sea, and after repeated rejections of offers to de-escalate the situation, the IDF has initiated a ground operation within the Gaza Strip," a statement from the Israeli army said.

The Israeli Defence Forces said the goal was to "establish a reality in which Israeli residents can live in safety and security without continuous indiscriminate terror." 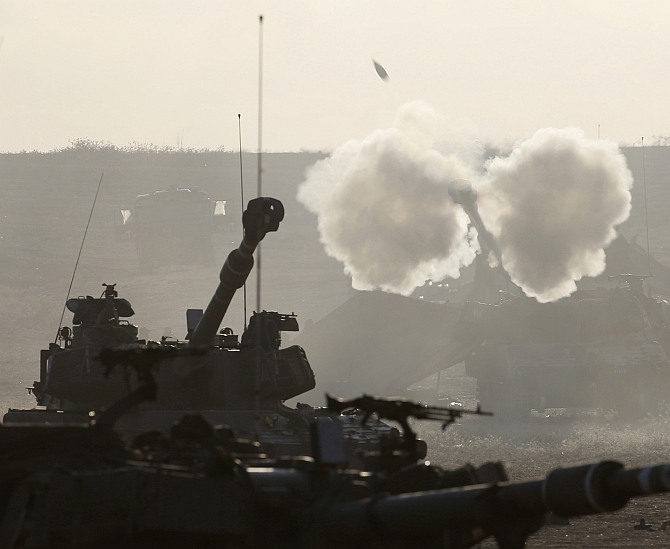 Israeli Army spokesman Gen Moti Almoz issued an appeal asking "the residents of Gaza to evacuate the areas in which the army is operating. This operation will be extended as much as necessary."

An Israeli soldier was killed in the northern Gaza Strip following a night of heavy fighting.

At least five Palestinians were killed after the ground offensive began, Palestinian sources said. They included a five-month-old in the town of Rafah, medics said.

Four Palestinians were killed in Khan Yunis, with another two slain in the northern town Beit Hanoun. The deaths raised the toll to 260. At least 1,920 Palestinians have also been wounded. Israeli jets have struck over 2,000 targets in Gaza.

In response, Palestinian militants fired more than 1,500 rockets since the fighting began, targeting all of Israel and killing one Israeli civilian and injuring four soldiers.

There had been a five-hour humanitarian truce on Thursday, but exchanges of fire resumed when it ended. 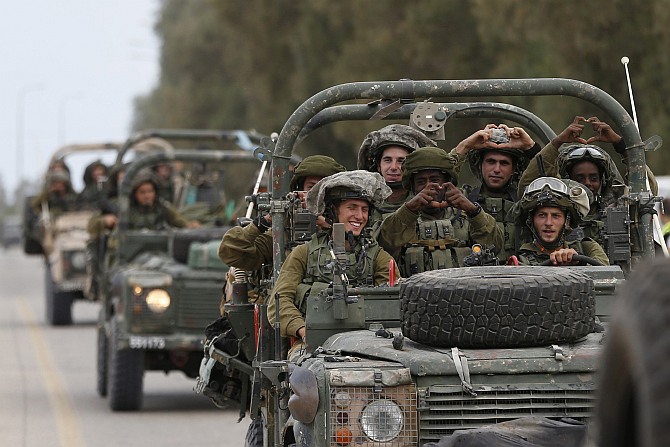 Israel withdrew ground troops from Gaza in September 2005, and last mounted a major ground operation in 2009.

Egypt, after failing to convince Hamas to agree to a ceasefire that Israel had accepted, sharply criticized the Islamist faction saying the group could have saved dozens of lives had it accepted a Cairo-mediated truce.

Hamas had rejected the ceasefire intended to start on Tuesday and continued firing rockets at Israeli cities.

"Had Hamas accepted the Egyptian proposal, it could have saved the lives of at least 40 Palestinians," Egypt's Foreign Minister Sameh Shoukri said.

Meanwhile, Israel mobilised 18,000 more reservists on Thursday evening, bringing the total of extra troops called up since July 8 to 65,000. 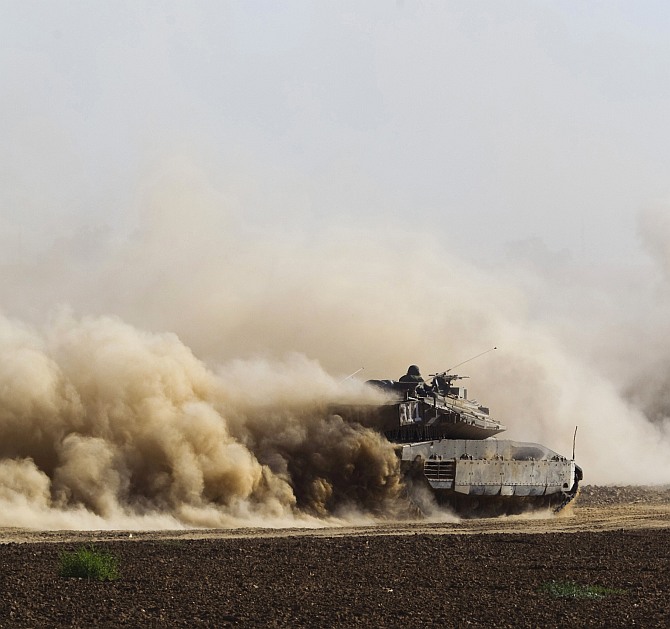 Image: An Israeli soldier sits atop an armoured personnel carrier (APC) as it drives after the end of a five-hour humanitarian truce, near the border with the Gaza Strip
Photographs: Ronen Zvulun/Reuters

UN Secretary-General Ban Ki-moon expressed regret over Israel's ground offensive against Gaza despite calls from the global community for restraint.

"I regret that despite my repeated urgings, and those of many regional and world leaders together, an already dangerous conflict has now escalated even further," Ban said.

"I urge Israel to do far more to stop civilian casualties. There can be no military solution to this conflict. This applies as much to Israel-Palestine as it does to Syria," he said.

"What the occupier Israel failed to achieve through its air and sea raids, it will not be able to achieve with a ground offensive", he said.

Journalists in Gaza were warned to take shelter, shortly before the ground offensive announcement was made. 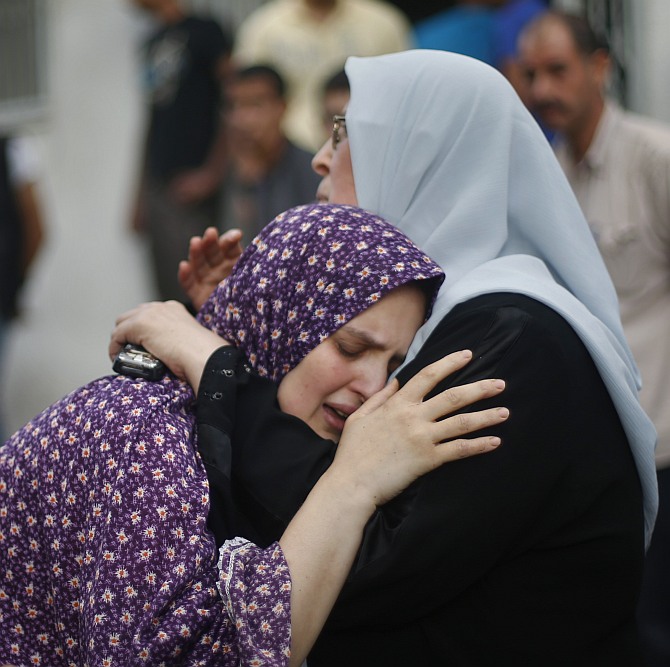 Image: The mother (C) of two boys from the Shaibar family, whom medics said were killed along with a girl from the same extended family by an Israeli air strike after the end of a five-hour humanitarian ceasefire, grieves during their funeral outside a hospital morgue in Gaza City
Photographs: Mohammed Salem/Reuters

Some witnesses were quoted as seeing some 10 tanks crossing the border into north-west Gaza. Israeli commandos have also been spotted on the beach in Gaza.

More rockets were fired from Gaza into southern Israel after the operation began, Israeli authorities said.

Israel's most popular news portal Ynet reported that one of the main goals of the ground offensive was to destroy tunnels that could be used to infiltrate militants into Israel.

An attempt by 13 militants to tunnel into Israel to attack a kibbutz on Wednesday had been thwarted by the army.

UN agencies working in Gaza have said that at least 1,370 homes have been destroyed in Gaza and more than 18,000 people displaced in recent hostilities. They say that most of those killed in Gaza have been civilians.

The ground offensive followed attempts in Cairo to negotiate a new ceasefire.

Thursday’s five-hour temporary ceasefire had been requested by the UN and other international organisations to provide emergency relief and distribute water, food and hygiene kits to the people of Gaza.